Here’s a brief report on VSCDA’s 2015 inagural event at GingerMan Raceway in South Haven, MI.  Based upon our experience there last year we had packed our down vests and knit hats. Coming from balmy Atlanta, we were pessimistic about the accuracy of the weather forecast for anyplace that was a fly-rod’s cast to Lake Michigan in May. Leaving 70 degrees of Indiana, I reported the temperature drop as we drove along the sand dunes of far western Michigan. It hit 51.

But it was not snowing. Or raining.And there was a great turnout. 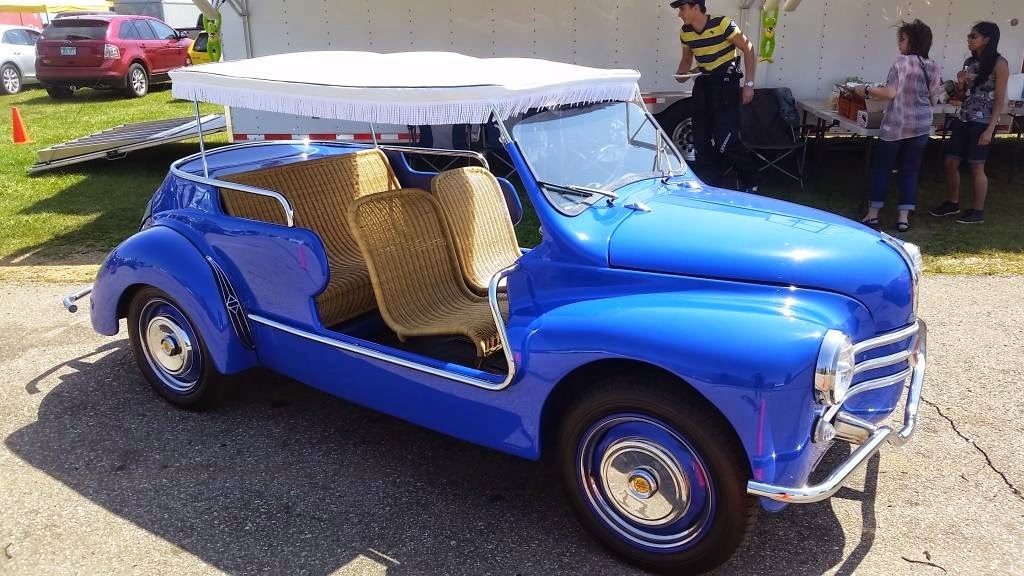 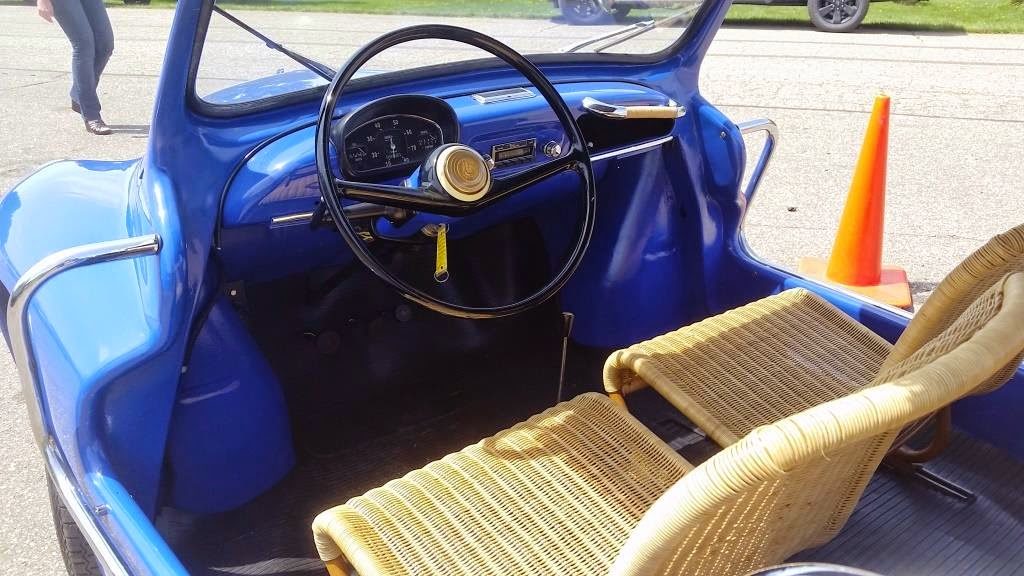 This Renault brought lots of smiles, and images of old-time picnics

We were the only Volvo running this year, even thought there was a record turnout. The weekend is referred to as “Spring Brake” and starts with driving school, so there are a goodly number of cars with X’s behind their numbers. One of those was a car that is very familiar – a nice 356 Porsche dubbed ‘Dr. Dreadful” owned an [normally] operated by Rick Gurolnick. The mystery of the X was solved when we learned that Dr. Dreadful’s 17 year old daughter had gone through the school over the weekend with Dad’s car.

Robbie’s “X” did not describe her lack of experience. Youth has its advantage, and she’s gonna be a force to be dealt with. She good and not afraid to keep her foot in it or make a move.  After a couple sessions with her — chasing her, I hasten to say, and truthfully, unsuccessfully, around the track I teased her and Rick that I could see that this was not going to end up as a once car family. 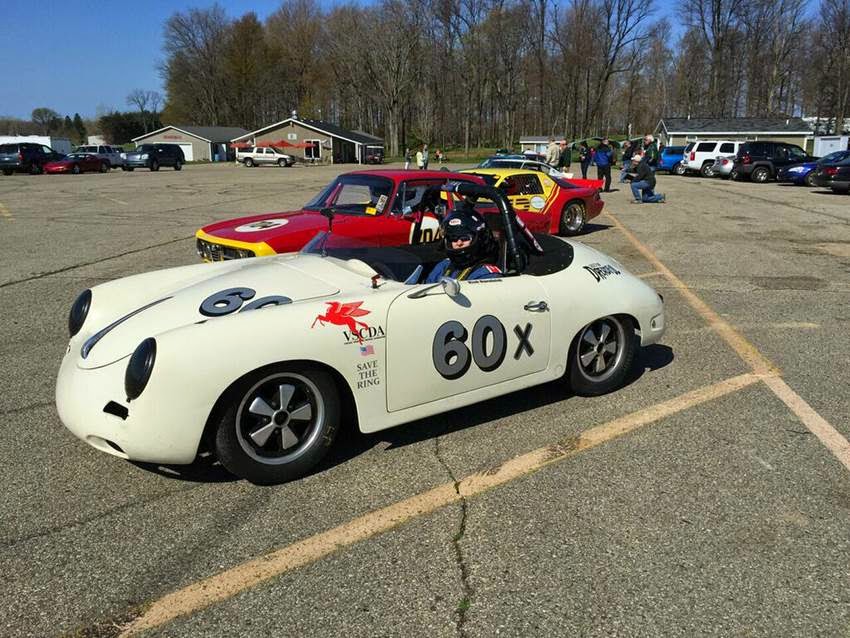 Robbie Gurolnick on the grid

Here’s what Rick had to say about the weekend:

Thought you might like to share a great “bucket list” event I had last weekend: 17 year old Daughter Robbie Gurolnick took the VSCDA vintage school, passed and raced the weekend in my 1960 Porsche 356 Roadster, her first time driving the car anywhere, some 30 years after I started in it.  And she rocked it! I picked Gingerman as a place for her to start in a rear engine car as it has generous, easy runoffs.  They had races Saturday and Sunday.  Out of about 35 starters she gridded 6th and finished 5th on Saturday with some great dices and a couple racers coming over to shake hands and congratulate her.  On Sunday everyone was gunning for her, but she gridded third and charged on the start up to second and a lap later was heading for first when the car lost midrange and went flat – Darn!  (Not an exhaust leak – I checked that earlier during practice – but maybe a failing mag pickup in  the distributor or dirt in the jets).  Ironically the GoPro mount broke and got run over by one of the following cars – including the SD card – so no videos. Anyway we had a wonderful time, everyone was as nice as could be and very welcoming. 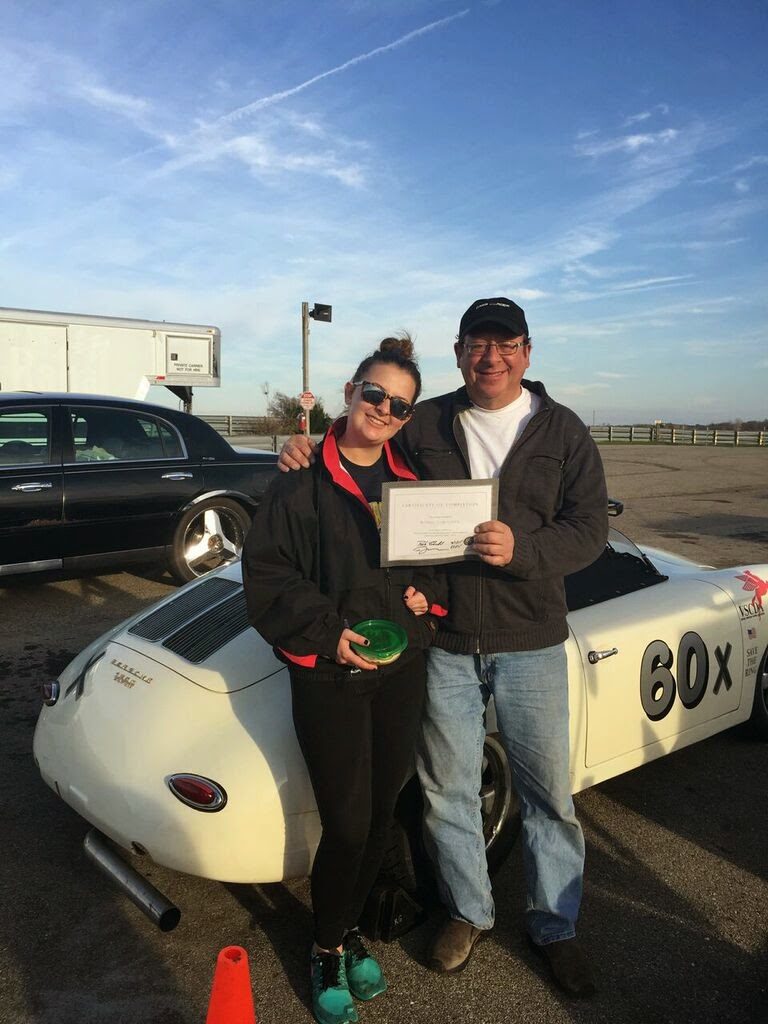 Sometimes I wish I were a father.

Race Coordinator (aka my dear wife) Joy Perry was the only formal P and B Motorsports crew for the weekend, and we got on pretty well. Jim Blett, Volvo engine builder/Jeff Babcock 122 crew member came over from his central Michigan home to lend assistance and also delivered a B20 block/crankshaft for Jeff’s next engine build. We were happy to have him, and were able to pick his brain of the considerable knowledge he has as a crew member on a previous LaCarerra Paniamerica team (since we  — that’s the royal “we” – are building a 444 competitor for the 2016 south-of-da -border-down-Mexico way races).

The weekend was pretty uneventful. People behaved themselves. One of my Driver’s Committee comrades remarked that it was early in the season and people did not want to risk messing their cars up so soon. 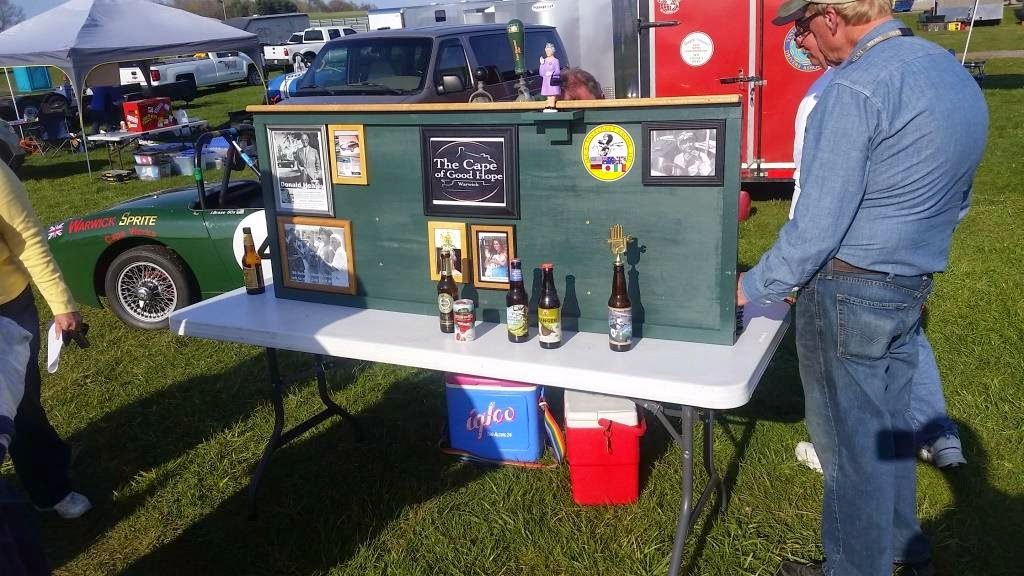 As usual, Group 2 was the largest of all, with 39 entrants. At the head of the pack was Colin Comer with his screaming  1959 Bugeye Sprite. Colin pretty much ran away from everyone in every race he was in. He chose to sit out Sunday’s Feature Race, given that it’s about as much fun to run alone as it is to do a track day.

I, on the other hand, did not have that problem. Starting on the inside of the 4th row I had a, ahem — interesting first half lap with a Mini beside me. Now I have a thing about Minis. That is, I loathe don’t like them. They remind me of bees around my head irritating me. That Mini buzzed me good going into the technically, ahem – interesting — Turn 4. I saw enough metal next to my door that I, ahem – decided – to take a brief agricultural excursion. I watched the back of the pack go by and re-entered the track.

Because I had been carrying around a track radio all weekend as part of the Driver’s Committee I imagine what was being said: “Control, Turn 4, 1 Red four wheels off … has re-entered track.” (“Watch ‘im.) But since this was a race there was no black flag infraction, so I started making up time.

Turns out I may have had the best race ever, especially with John Hagen’s and his ’63 TVR. The video will show you all of this; I will save the outcome for you to discover. But I will say that there was only 0.08 seconds between me and the higher finishing car in my class.

So we’re in preparation for SVRA’s Spring Vintage at Road America May 14-17. Yep, this week. I feel I am living, breathing, eating and sleeping raced car prep.

Keep ‘em rolling, and we’ll see you on the flip side of Spring Vintage.