To start – why did it take a month to get this to you? Answer” Too many board meeting, too many projects, like R/R the engine on one of my street cars, cleaning and painting the engine. Better late than never. 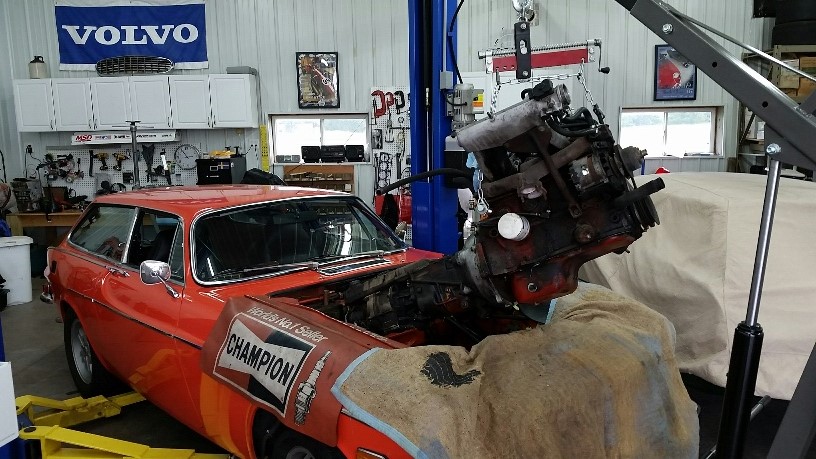 This beast has occupied my time. It’s tough being picky about what your engine compartment looks like.

Oh, and be sure to at least go to the end of the post to see the other reason!

The bad – rain for Friday’s practice, Sunday afternoon sessions messed up due to an Alpha that ended up straddling a guard rail Sunday morning

It was about as slick as it looks!

The ugly — an Alpha that ended up straddling a guard rail, a bump and spin that means body work on 1 Red

The car count was down a bit compared to 2017, and as a result Race Group D consisted of 2 liter Group 2, Group 8 and Group G70 cars running together. Watch your mirrors boys and girls. The bright blue Mustang and high wing Porsche 911 made me look mighty slow, even if I was faster this year than last.

The Volvo Pavilion was populated by four 1800s. Three of us had a pretty decent weekend. Tim Detwiler struggled throughout the event with a miss that remains a mystery. Actually, it was great seeing Alex Christopher have good runs. He popped a fuel injection port plug during one session but the P and B Motorsports Parts Department was on site; overall his 92 White ran well.

Friday’s morning rain made being out on the track an exercise in futility. But by late afternoon the tide had begun to turn for the annual Paddock Crawl supported in part by Hagerty Insurance. 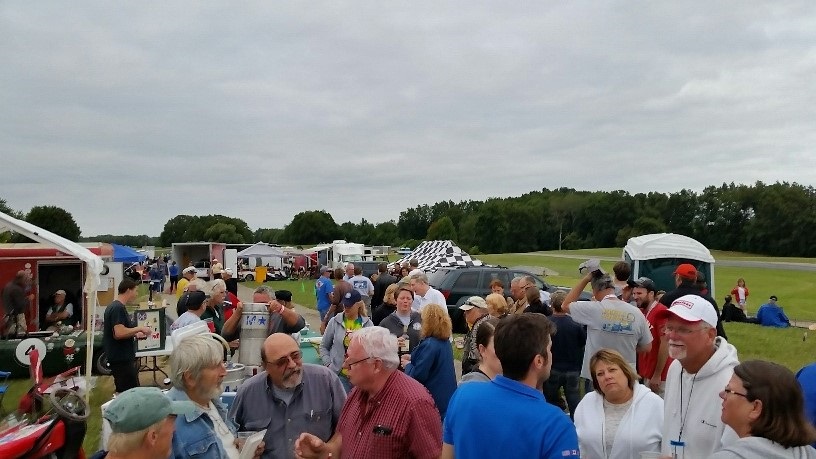 Saturday’s weather was dramatically improved and set up the day for a lot of track time. In the Sprint Race I had my sights set on Larry Boyer and Tony Drews only to have the session shortened for who knows what reason. So I had to wait for the late afternoon Heat Race to see if I catch them. 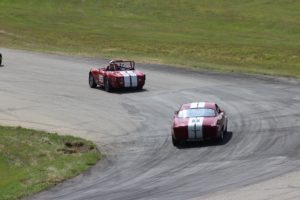 Alas, Turn 3 of the first lap ended all hope of that when two of us tried to occupy the apex at the same time. “Thump.” And then I felt like the NASSCR driver along for the ride after a nudge from someone either ticked or wanting more prize money, or both. The Bumper was not either of those, and the Bumpee managed to escape with some modest damage behind the left rear wheel. Neither of us was angry, and as is often the case we walked away shaking hands and being apologetic to one another. Here’s a bit of video that culminates in the bump.

And the Bumpee learned something, that hopefully will prevent this in the future.

Grattan is a highly technical track. It has a very long front straight that allows the higher horsepower cars to get some exercise, and a lot of squiggles that favor the smaller cars. Turn 3 is a slow, off-camber downhill. There are two places on the track where the suspension gets really light. Tracks have names for the different sections, and none is more appropriate than “The Toilet Bowl” of Turns 5, 6, and 7. Imagine watching water swirl as it exits the bowl and you get the picture. It makes for real work horsing a big car around.

Nonetheless we managed to finish second in class in the Feature behind Tony Drews, who I had teased about his new turbocharger that I figured he must have installed after Blackhawk. 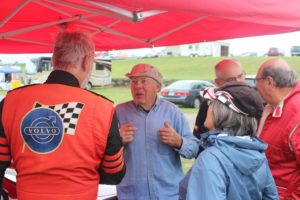 Love this picture of Ray. It’s so typical. 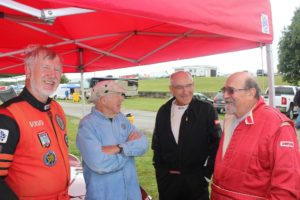 Now on to preparation for Road America’s Elkhart Lake Vintage Festival in three weeks. The bodywork was done by Dave Buettner and fluids changed. We’ll be ready. 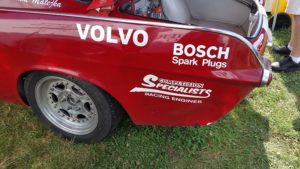 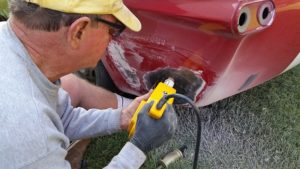 Dent  pulled with the “Spitzenagel” 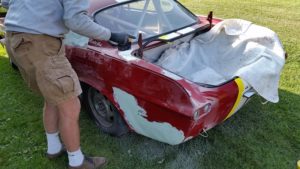 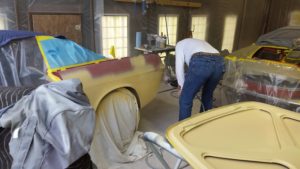 Better than new! Thanks Dave!

One weekend was taken up getting a new experience. Fox Cities buddy Scott Barr paid me the ultimate compliment by inviting me to co-drive his Spec Ford Racer the enduro at the Milwaukee Mile Midwest Council Race. We won!!!! 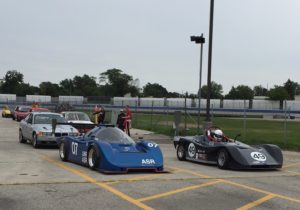 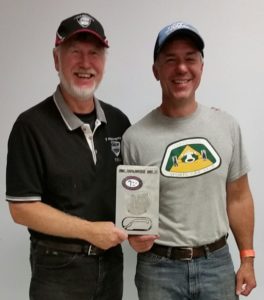 Is there a Spec Ford in the future for Race Coordinator Joy Perry? Her wedding anniversary is coming up!