As far as track time goes, The Hawk is not exactly at the top of the list. When you are at an event with 550 cars you don’t expect to have just too many sessions, nor very long ones. But The Hawk is a party beyond any other. Personally, because it’s in one of only a few real “racing towns,” it’s even better than The Mitty at Road Atlanta..

We showed up at noon on Thursday and enjoyed the scenery and a bit of relaxation. And we got to meet our newest Volvo buddy, Goran Nyberg, who came with his three kids plus one boyfriend (a daughter’s,  not Goran’s) all the way from North Carolina. The kids were visiting from Sweden.

Most of our cars started as someone else’s; Goran’s came from Richard Schnabel several years ago, but it has been improved upon, without question. 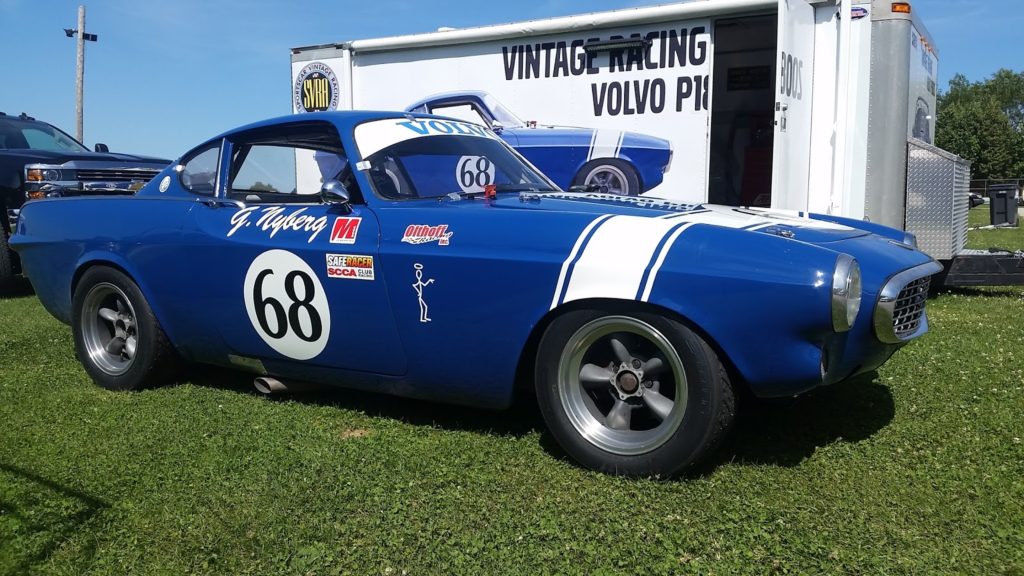 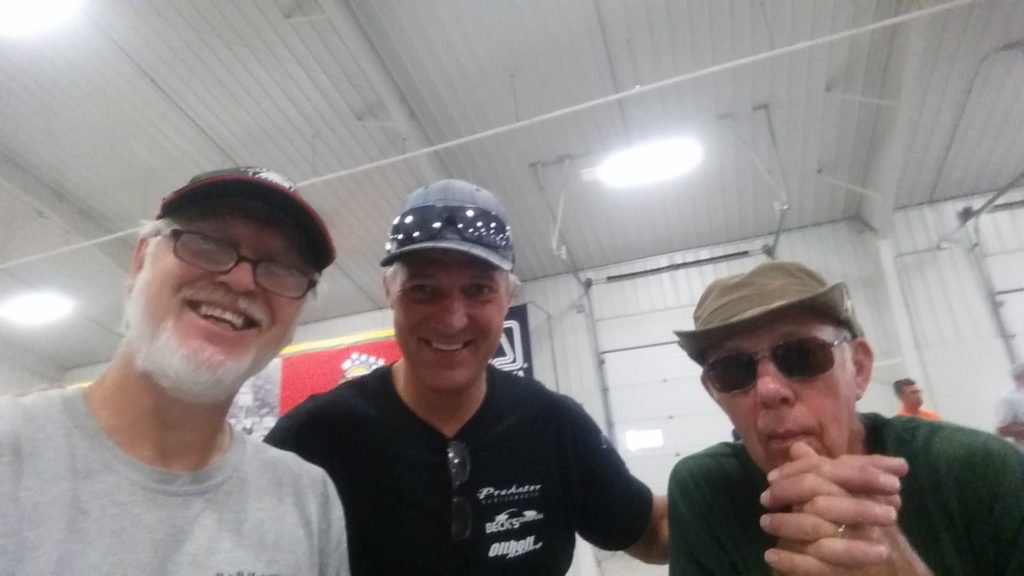 The Three Vänner of the weekend — Perry, Nyberg, and Freiwald

And Goran is F-A-S-T. (Plus just one hell of a nice Swedish guy with a strong Volvo affiliation.)
Friday night’s Race Car Concours in downtown Elkhart Lake is just about beyond imagination. The race cars get a police escort into town to park along the street sides. The path downtown is lined with parade spectators. 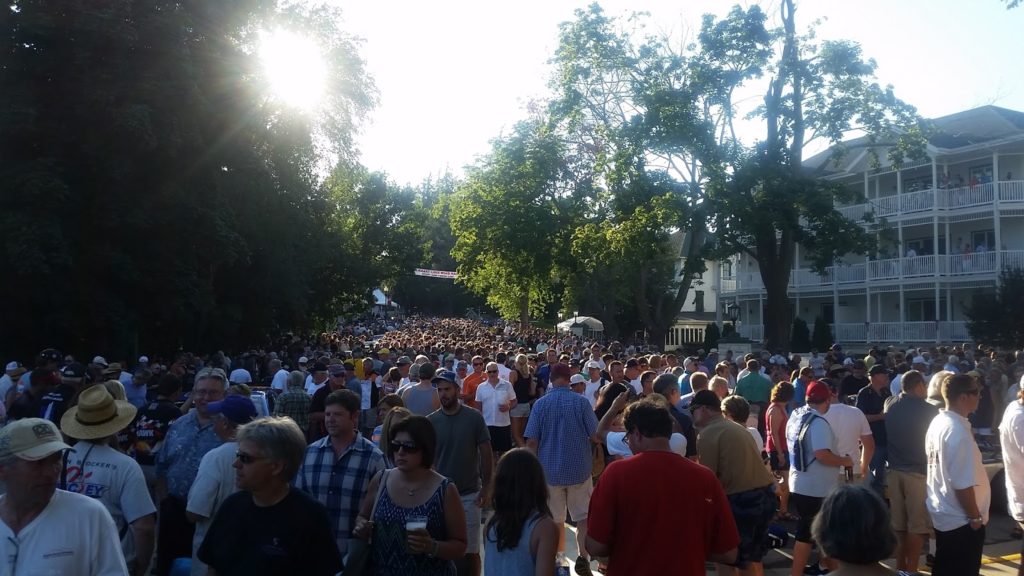 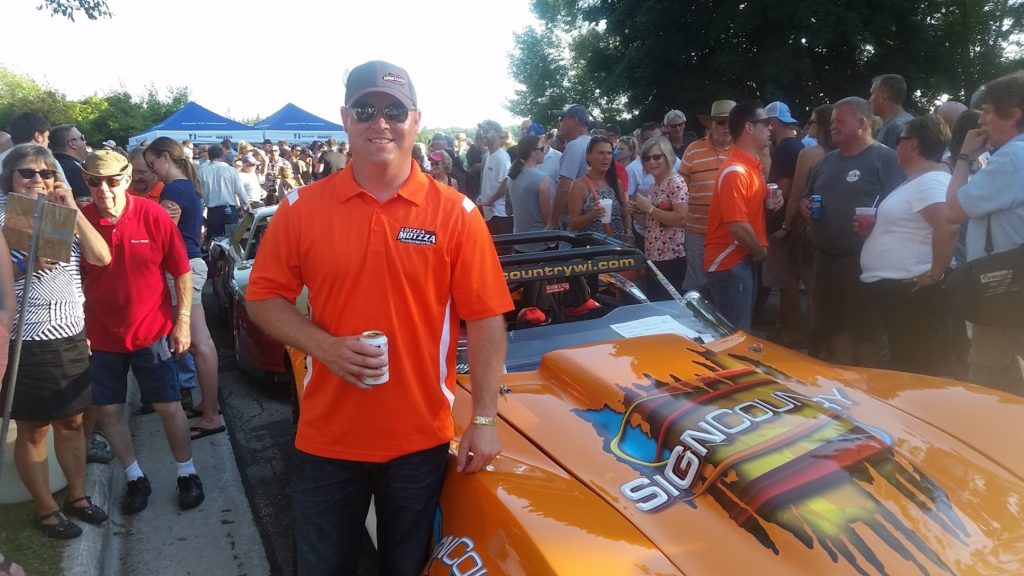 In the early 20th Century Elkhart Lake was the playground for Chicago. The city has retained (and even enhanced) its charm. Siebkins Resort and the Osthoff play strongly in the history and natural beauty.

If you have read Burt “B.S.” Levy’s fictionalized account of road racing in the 1940’s and ‘50’s, The Last Open Road, no red-blooded male can walk past the lake without envisioning Buddy Palumbo and Sally Enderle cavorting on the beach in the moonlight.

Elkhart Lake beach on the left, scene of … 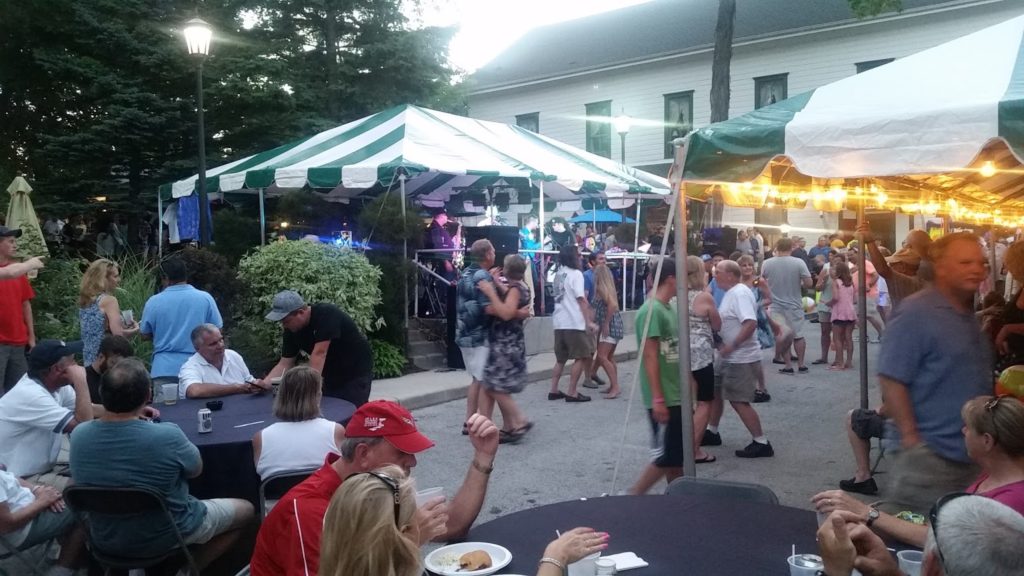 Live music at Siebkins reving up the crowd on a spectacular evening.

The Hawk itself is a ‘see and be seen’ event that attracts people from everywhere. It’s a spectator’s delight with just about every type of race car imaginable. Vendors come out to add to the ambiance and automotive attraction. 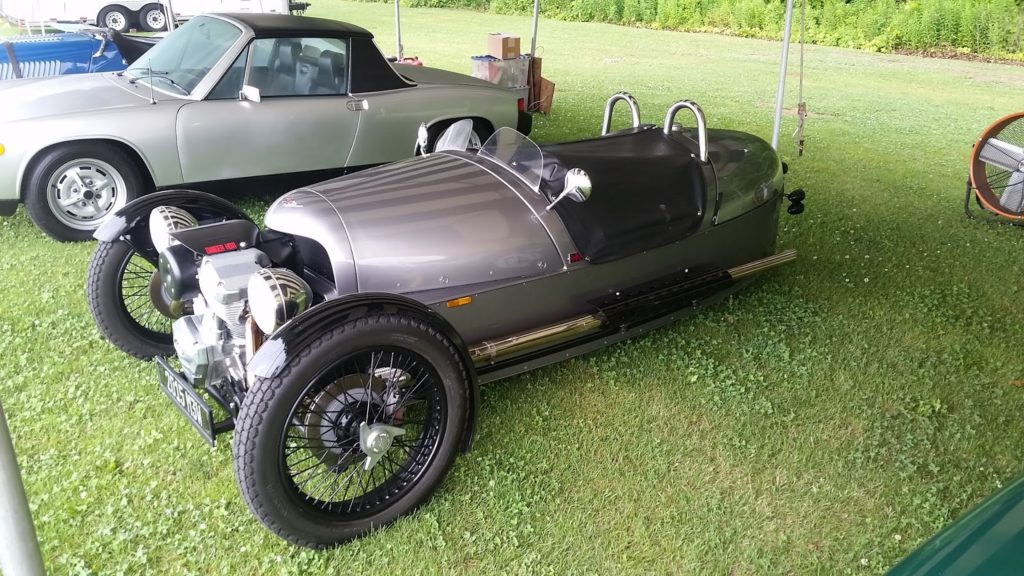 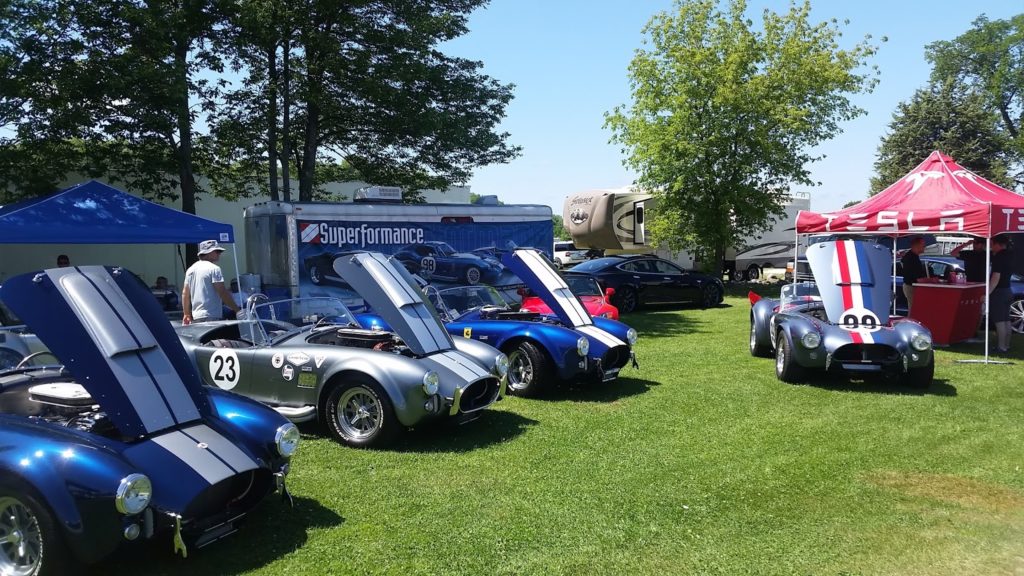 A group of Cobras, including No. 99 that Rollie Stephenson has had since he was a kid (he’s a late middle aged kid now), was on hand to share space with Tesla. 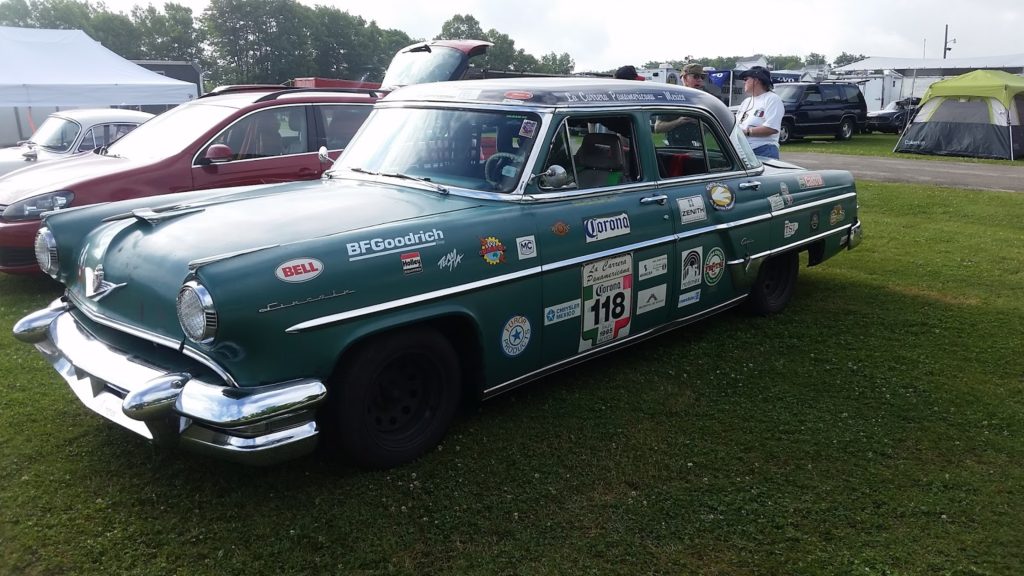 One of two LaCarerra cars on hand. This behemoth actually ran with Group 8! 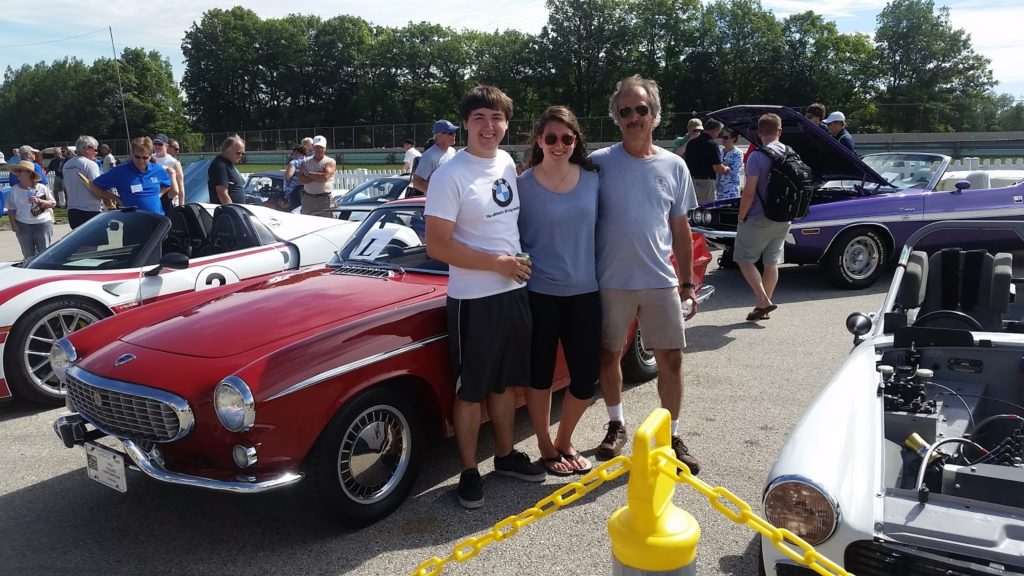 The Hawk includes a Sports Car Concours on Saturday night. The Brabenders won first in class with their P1800A, beating out Ferraris and others!

Oh yeah, about the racing …

I had a new first experience during qualifying on Friday. On the second green flag lap as I downshifted entering Turn 1 the rpm’s jumped. It only took a microsecond to realize that the throttle was stuck open. I did my version of trail braking around 1 and jabbed the gas petal, freeing things up for Turn 3. But the problem returned as I approached the tight Turn 5 so I slapped off the ignition and rolled into the exit straight off 5.

At first we thought the cable had stretched and caught up on the linkage, so we tightened it. Of course, it can’t be that easy. While Doug Senk was cranking down on the nuts that squeeze the cable the shaft broke. Our 5 minute job turned into 90 minutes, including borrowing Jeff Johnk’s drill and creating a new shaft.

Then on the next outing – Qualifying — it happened again! I rolled to a stop on the access road outside Turn 5, jumped out and, with the help of Jim Stephenson, Mark School and Amish John, found that there was binding in the linkage with a wide open throttle. It must have looked a little bit like the Keystone Cops. It’s a mystery why this would show up all of a sudden since that had not been a problem at Blackhawk, and I had not touched the carbs since.

So how did the weekend turn out? Not bad. In Sunday’s late afternoon Feature Race we placed 3rd in class, behind Brian Davis’ Elva Courier and Goran’s ’65 Volvo 1800. Goran had me beat by a handy 7 seconds per lap! I’d like to use my friend Cana Comer’s line “Don’t get used to it,” but 7 seconds is a tremendous difference … 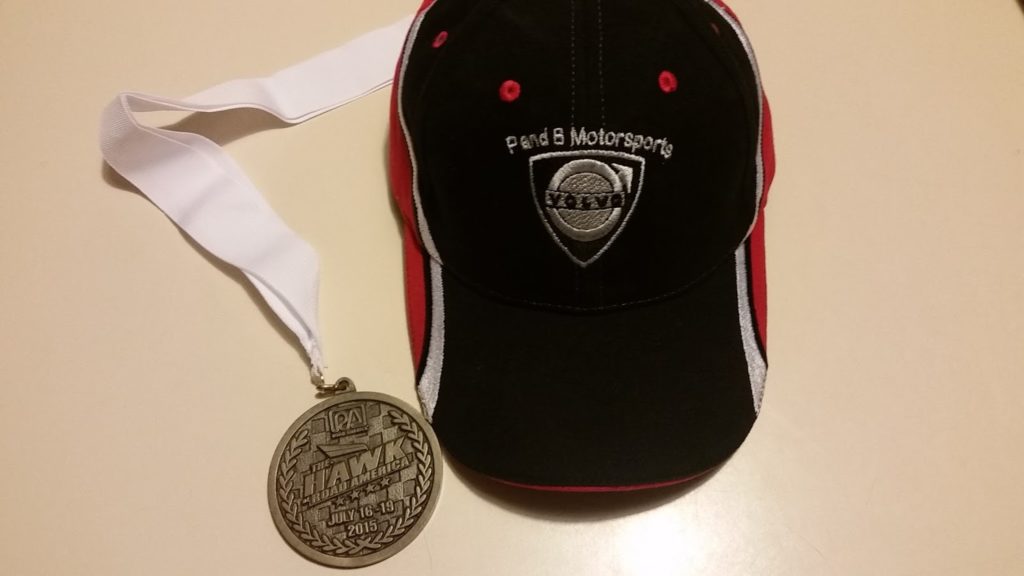 Ray Freiwald’s drive train gave up on him late in the qualifying race on Saturday, so at the end only 2 Volvos were running, and that was only thanks to Goran’s ingenuity of finding a tractor top link at Mill’s Fleet Farm to replace the nice aluminum trailing arm that broke on him.  Now it’s a real ‘Swedish tractor!’ 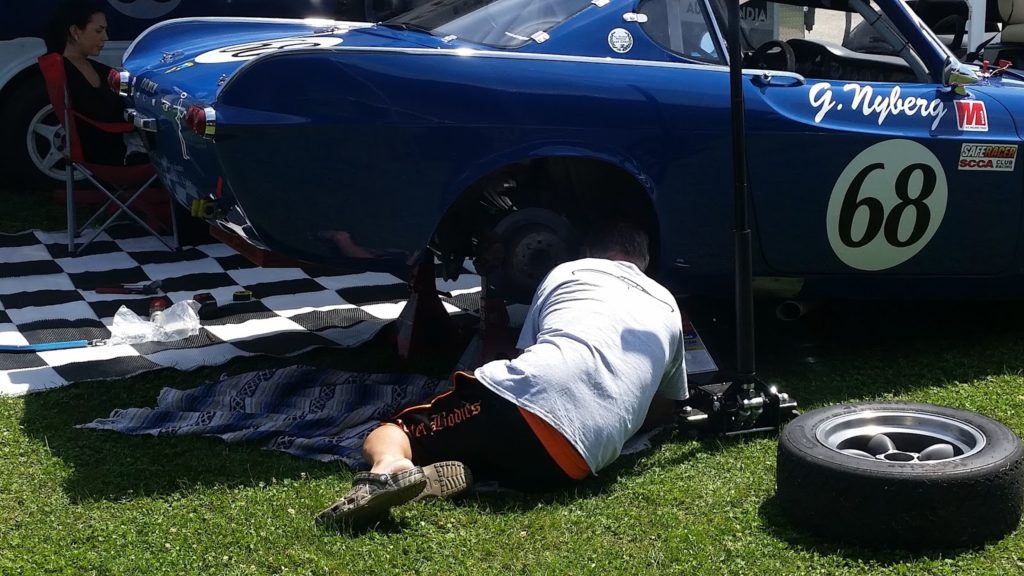 Seems I am not the only one that spends time doing this stuff!

Overall it was a great weekend.  And now we have a bit of a break. Speaking of brakes, I need to figure out why I have a pedal that goes nearly to the floor at inopportune times, like at the end of the fastest straights on the course. Never a dull moment!

Here’s a relatively short (6:53 min.) video of the Feature Race. Sorry I cannot get the video to synchronize properly with the data so there is no speedometer or tachometer.

And check out the September 2015 issue of Classic Motorsports,  p. 7 to be exact. (Thank you, Mueller Motorwerks.)
Here’s a link to a really nice video done by Jessica Johnk: https://www.youtube.com/watch?v=Xrf2mJBbkJc
Bonus photos 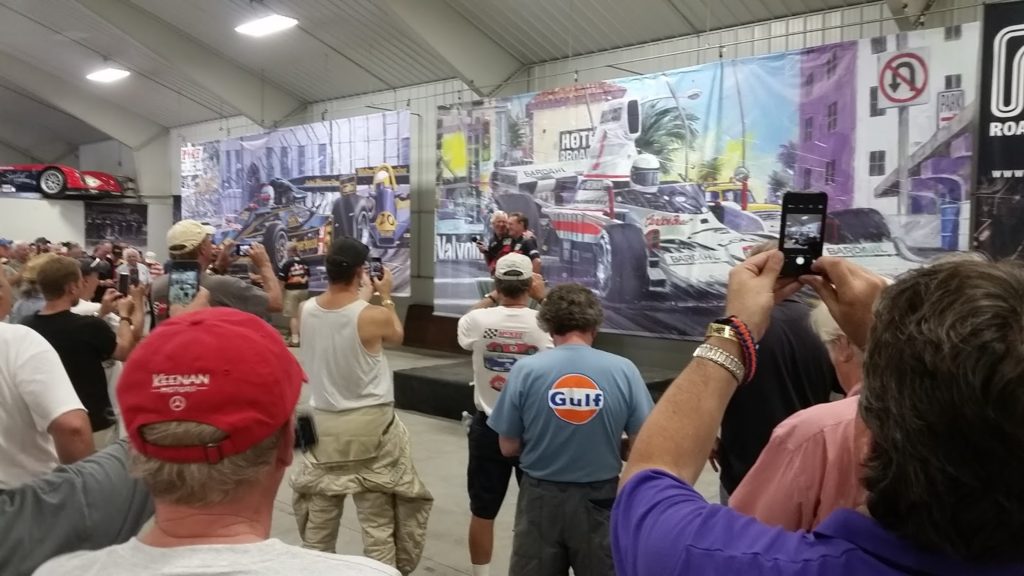 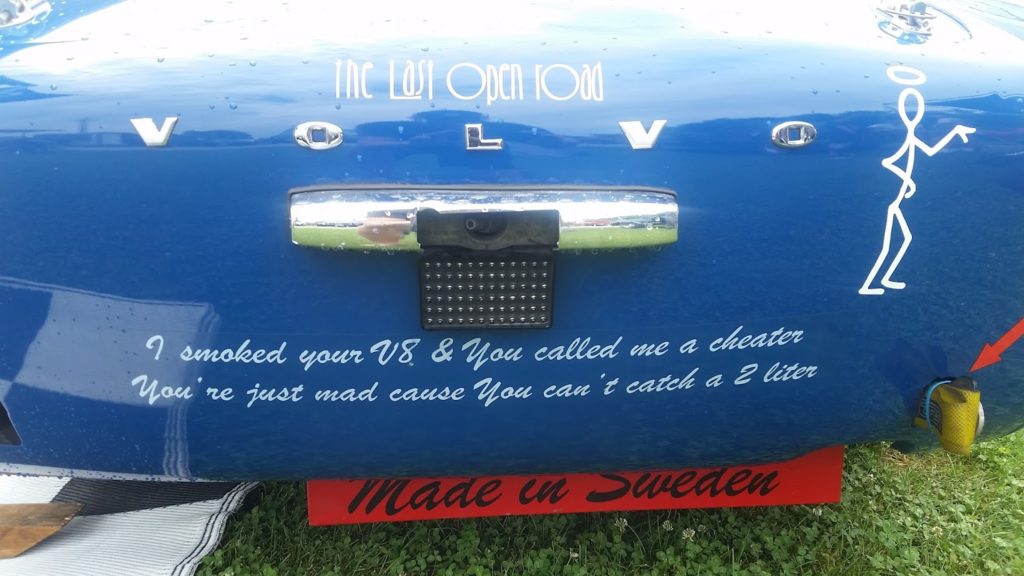 The Nybergs. L to R, Eric, Cecelia, [boyfriend], Victoria and Goran. I could understand them once in a while. I bet they were talking about me in Swedish. 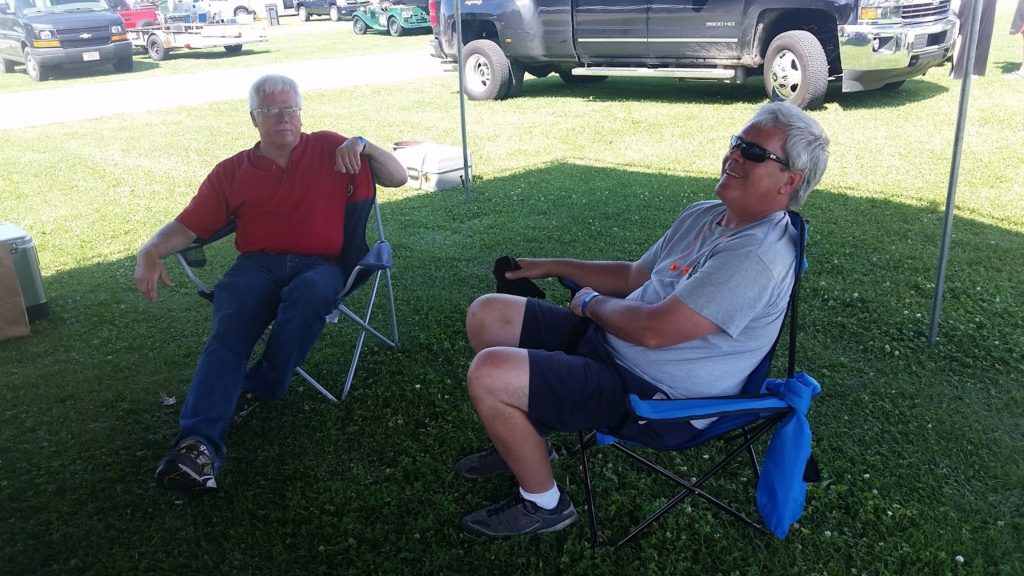 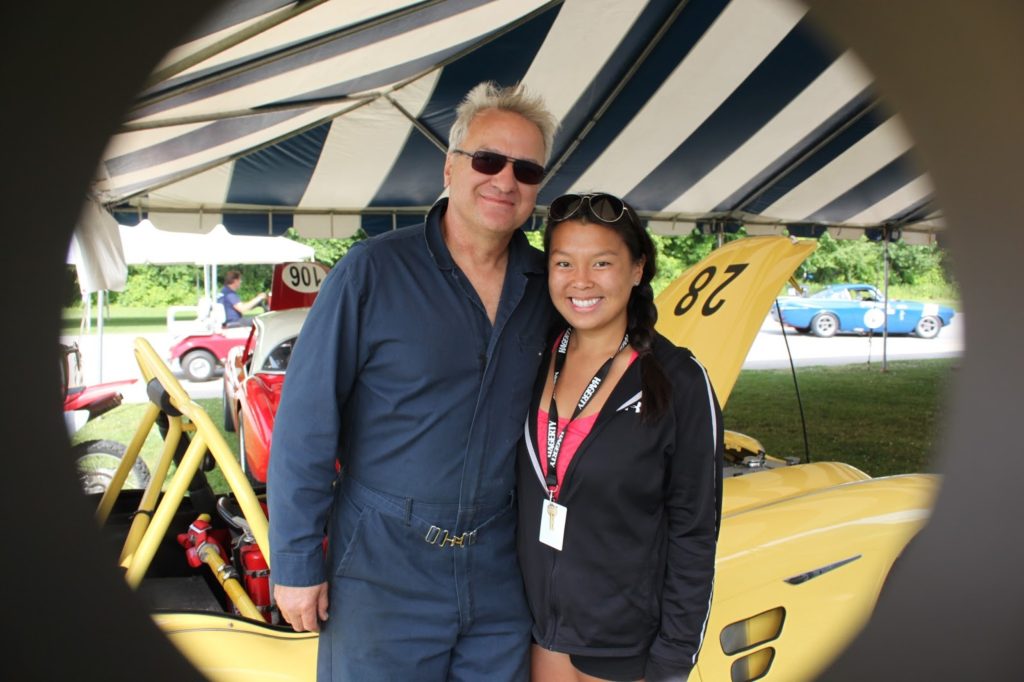 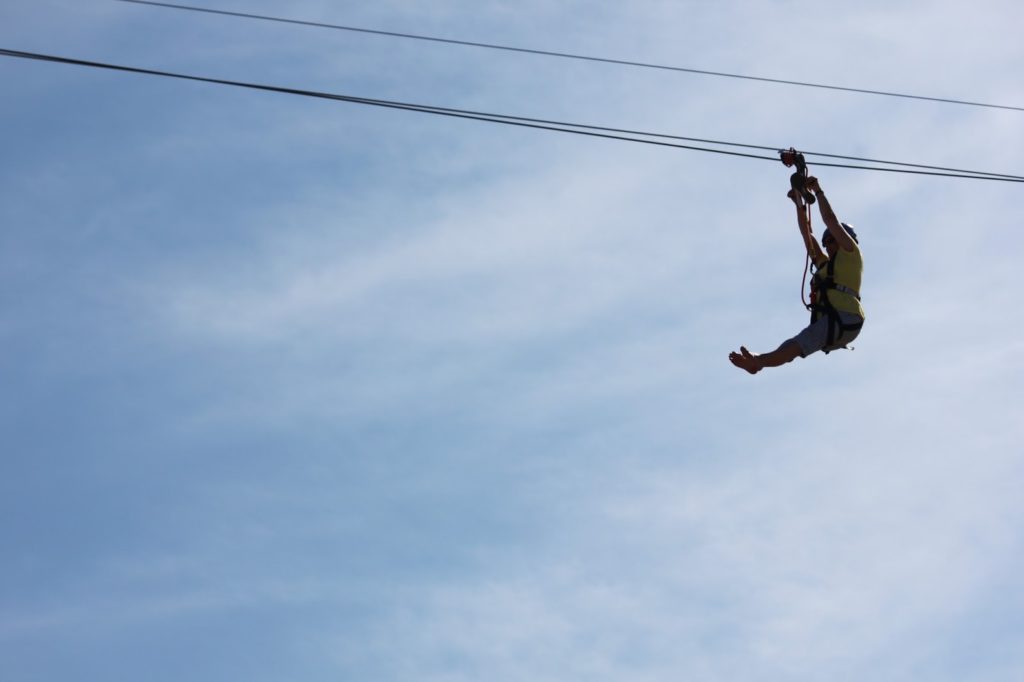 How long before Road America has a water slide? (Phil Koller photo) 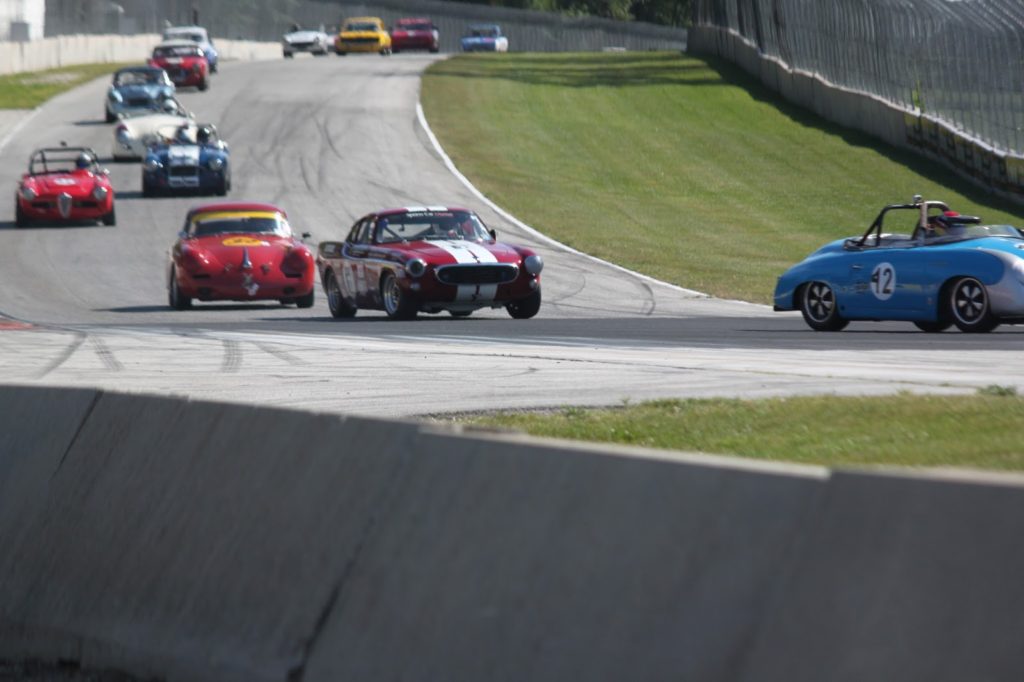