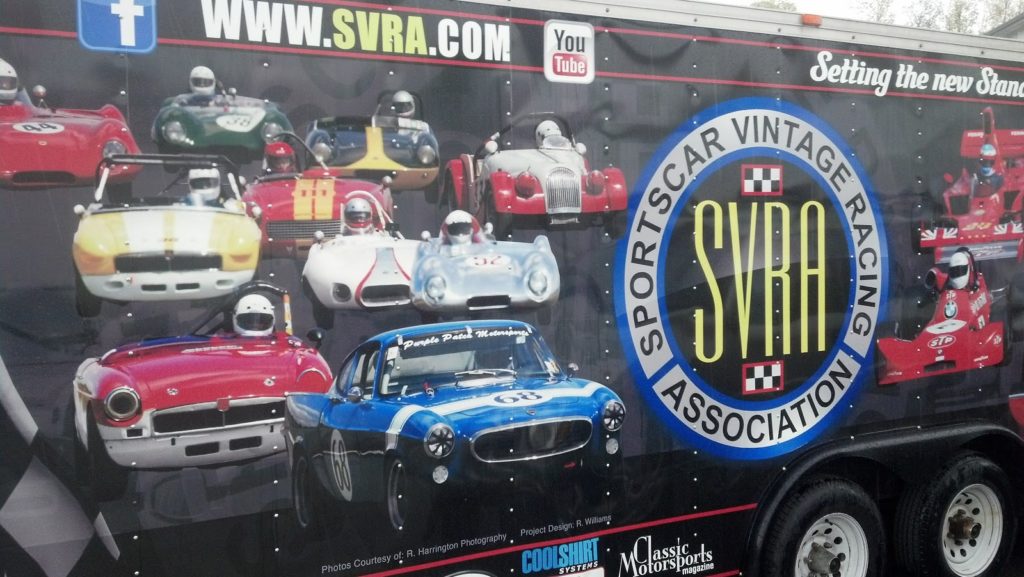 Sha-zam! Jim Nabors could not have said it better than I felt crossing the finish line in the Sunday race of SVRA’s Spring Vintage Weekend at Road America. Finally, the car that Duane Matejka’s built was back on top again!

Pre-race changes tuned out to be helpful. Our new digital EGT gauge allowed us to see and monitor individual cylinder performance. Connected to the data acquisition system we are now able see how each cylinder is performing under all racing situations. We can now jet the Weber carbs with a greater degree of confidence that we are maximizing performance without running the risk of leaning out too much. 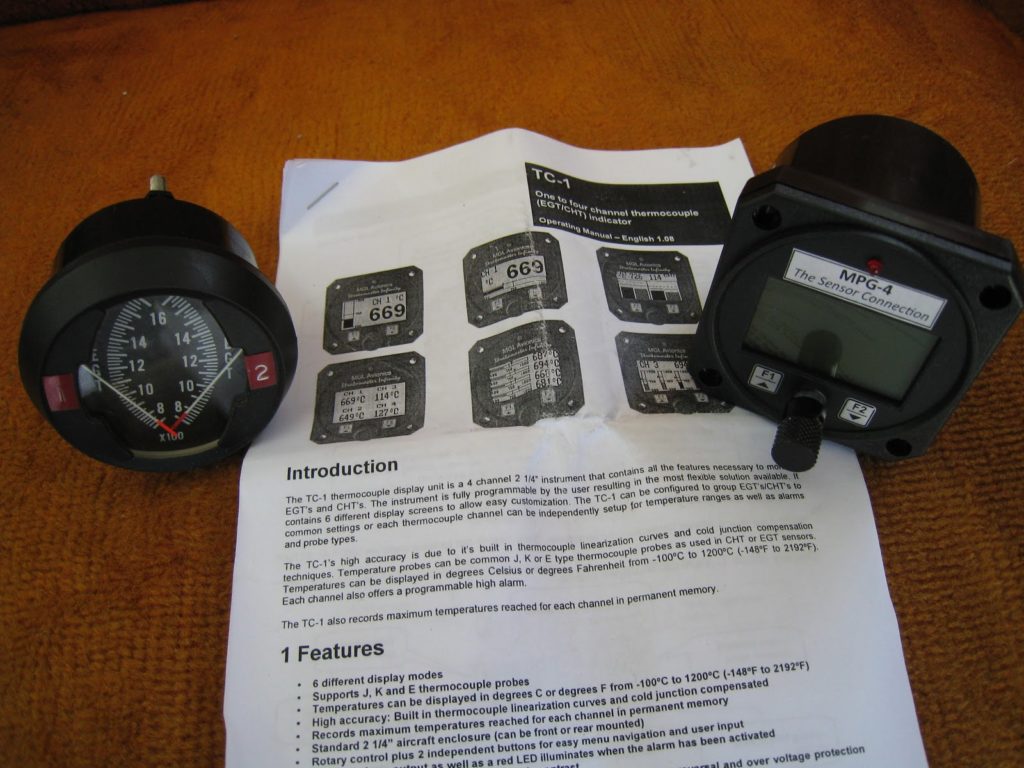 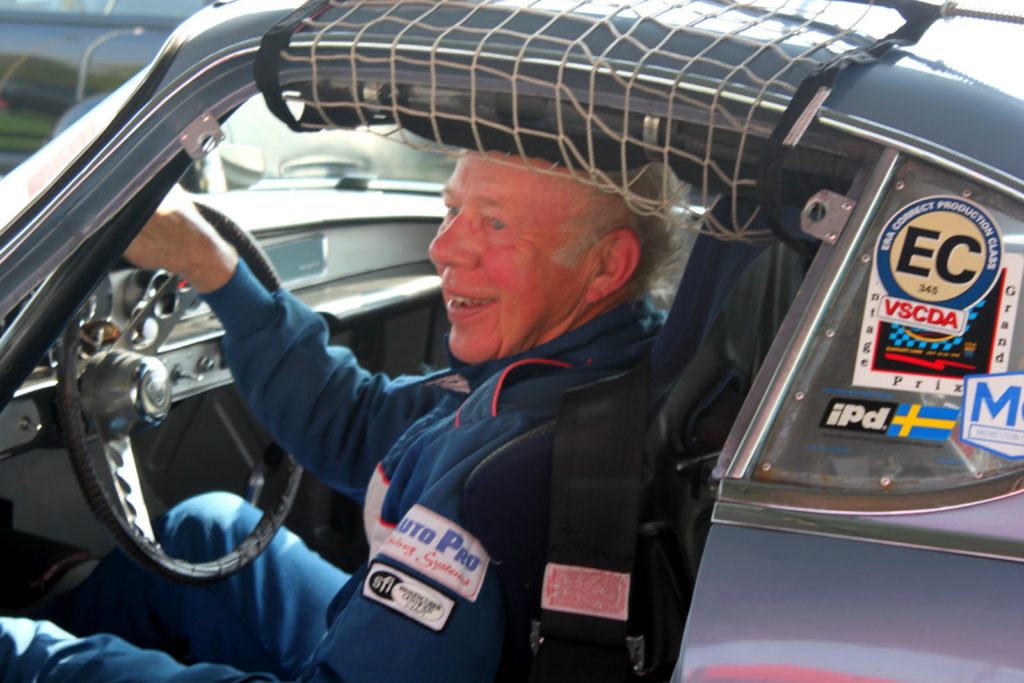 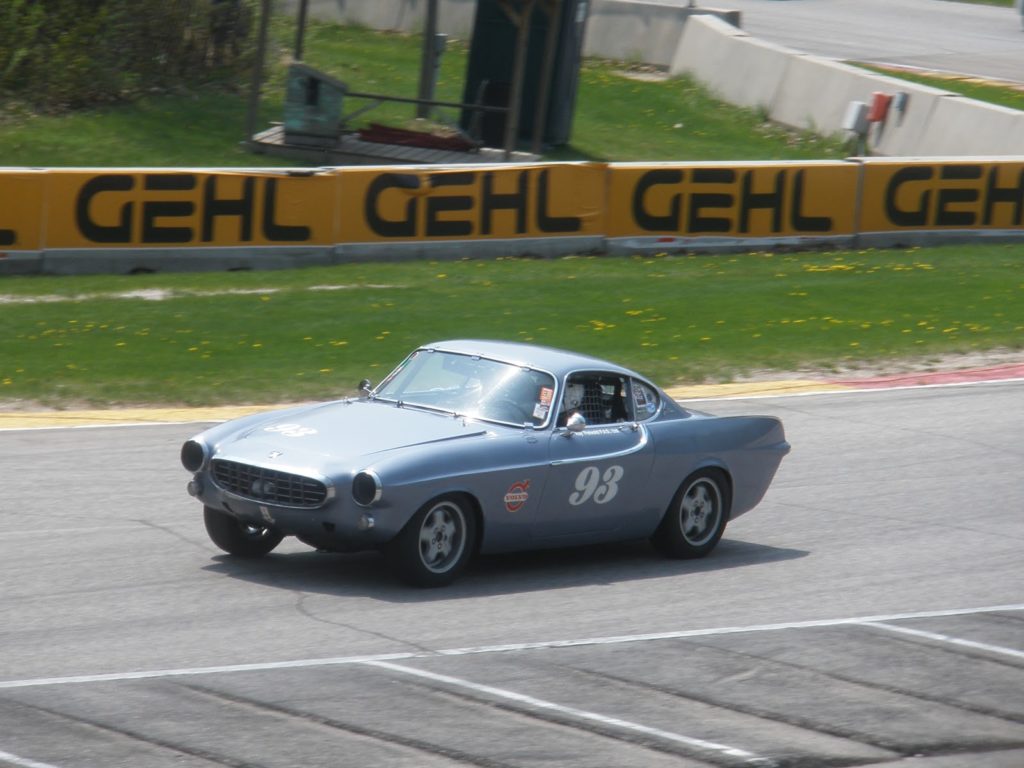 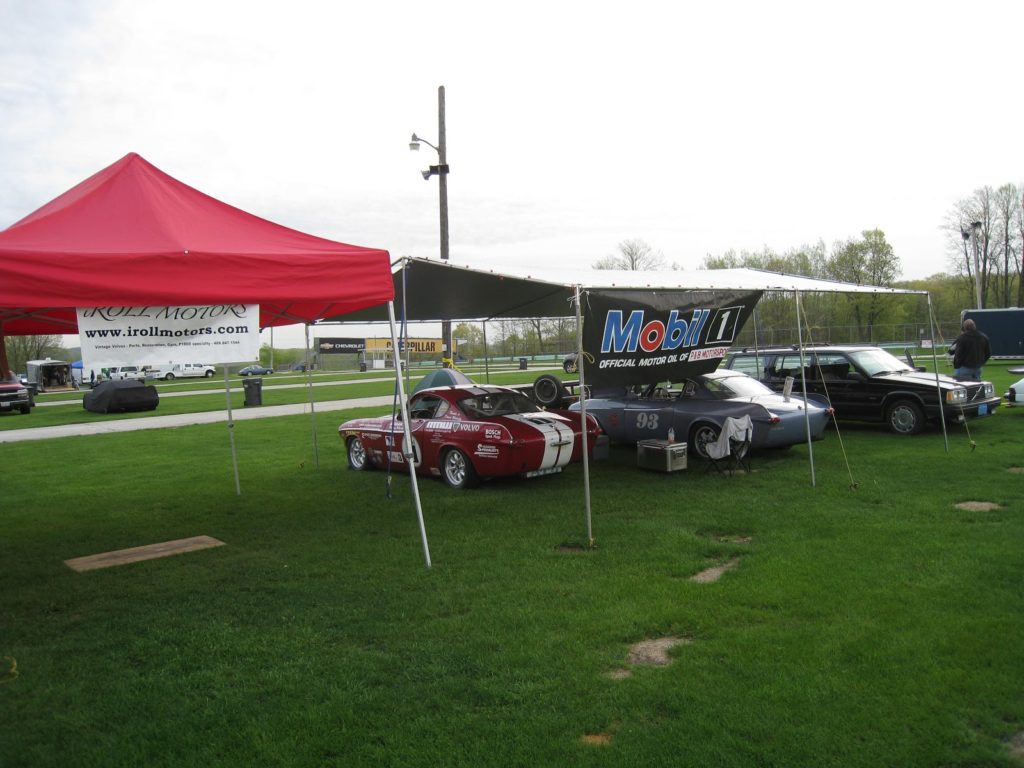 … so we got to be under the Big Canopy … 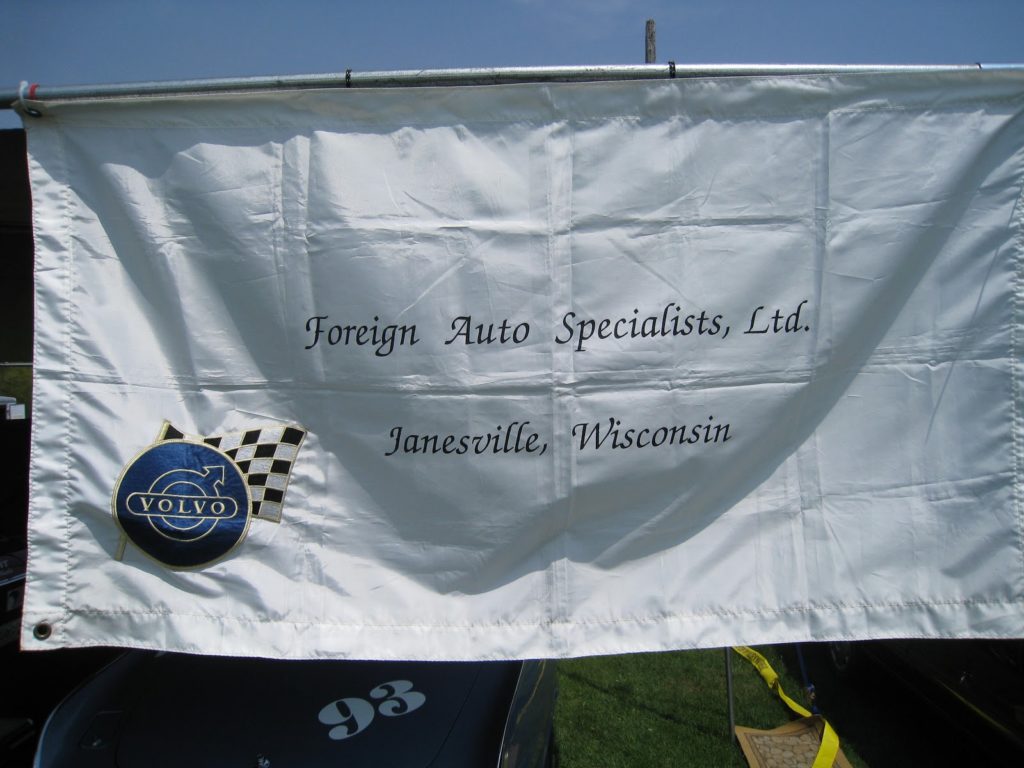 ..that sported Ray’s own advertising, along with our own.
Friday we got a decent morning practice run.  Sharon Adelman in her #51 Turner Mark III showed me her stuff in the morning, which led to a little fantasizing, uh, I mean strategizing,  about this little number. Fast on the straights, slow in the corners made me realize that I was going to need to be ahead of her before Turn 1 in any subsequent sessions 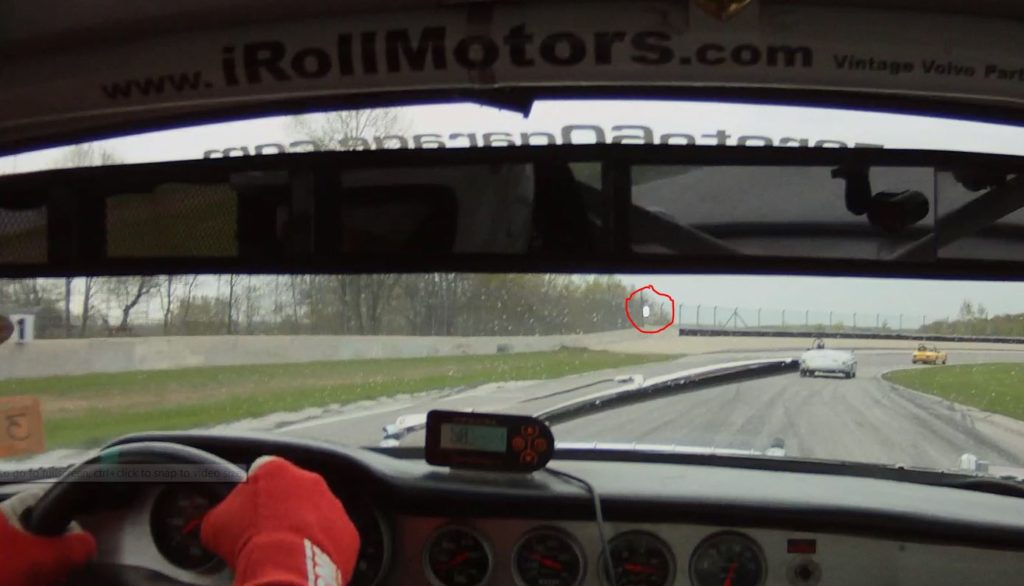 Road America is experimenting with a trackside lighting system to supplement corner worker flagging.  They are very bright and much to my liking. Unfortunately their use for this low budget low importance racing was sporadic at best over the weekend. See red circle.

By Friday noon the damn skies opened up, making Road America into a repeat of Road Atlanta. Radar showed the goddess of racing was AWOL again. A band of heavy rain stretched eastward from southern Viking Land, landing a 47o hay maker below the 45h parallel, centered on Elkhart Lake.  Of course, it was gorgeous on Thursday. 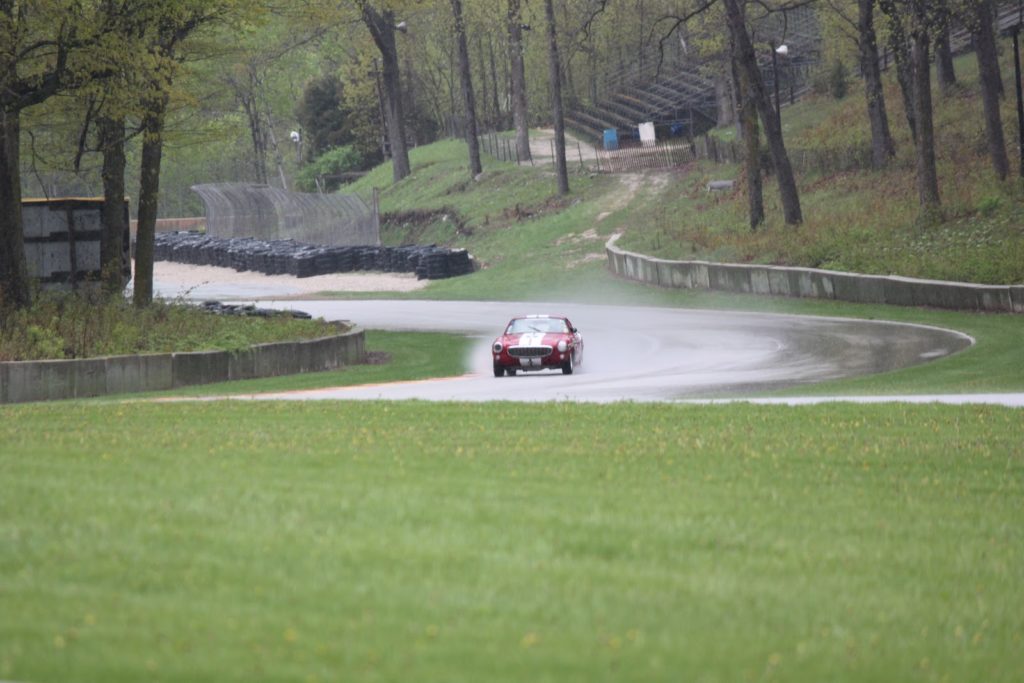 By god I paid my $575 in registration, so the weather be damned. Note huge fan turnout for “Qualifying 1” (Phil Koller photo)

Our Dirt Stocker rain tires arrived with Race Coordinator Joy Perry, and the crew was game, so we hooked up the Harbor Freight so-called heater/defroster (don’t waste you $9.95!) and out for Qualifying 1 we went. Washed the Georgia mud off the bottom of my car. Turned a blazing (?) 3:40. There was only one other crazy on the track. I came in second. Pretty good, huh? 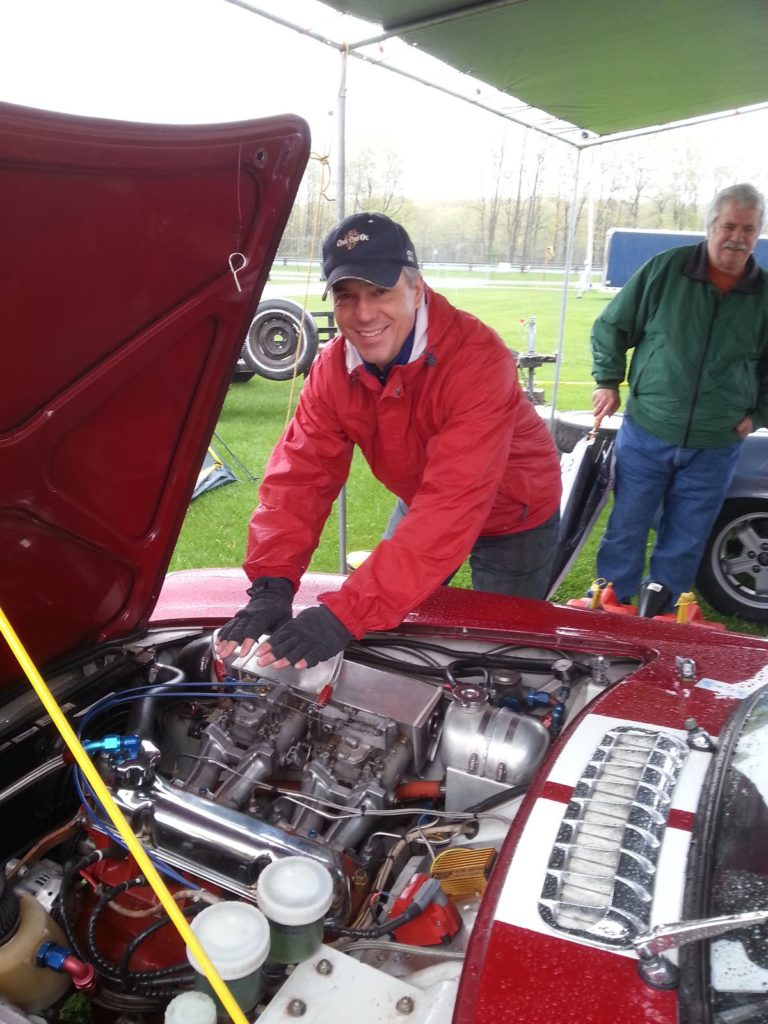 Thank goodness that P and B Motorsports’ Lodging and Hospitality Coordinator Pam Buettner had brought her Winnebago and stocked it with good movies for a cold rainy evening. The Boys of Bonneville kept us from thinking too much about howRIDICULOUS it is to be 47o and raining in May.

Saturday morning was better, a lot better. The track was dry so the Hoosier Speedsters re-shod Mobil 1 and out we went for the second qualifying race. My stated 2013 Road America goal is to break the 2:50 mark. That did not happen but I did set a personal best time. Bob Wagner led Jeff Jagusch Jr.’s Datsun and me throughout Race 1. Jagusch spun in Turn 3 of the last lap, leaving the Healey and our Volvo finishing 1-2. Adelman was AWOL, the word being that her husband was involved in a significant incident in his race. 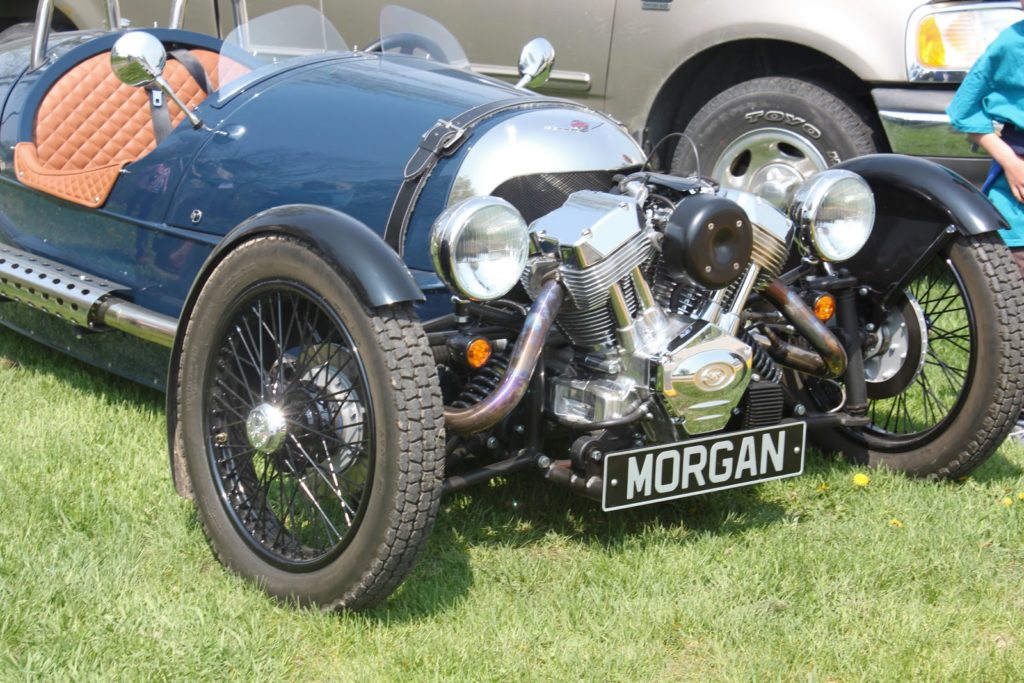 Saturday turned out to be a pretty nice day for racing, spectating and kibitzing with friends. The pictures provide a little visual automotive delight, with the new $70,000 Morgan turning a lot of heads. (Phil Koller photo)

We are enormously fortunate to have Crew Chief Dave Buettner and Lodging/Hospitality Coordinator Pam Buettner bring their Winnebago to serve as a locus of operations, banter and dining. Sitting around (or in the case of inclement weather, in) the Winnebago provides a relaxing place to enjoy each other’s’ company, tell lies and strategize the next outing. 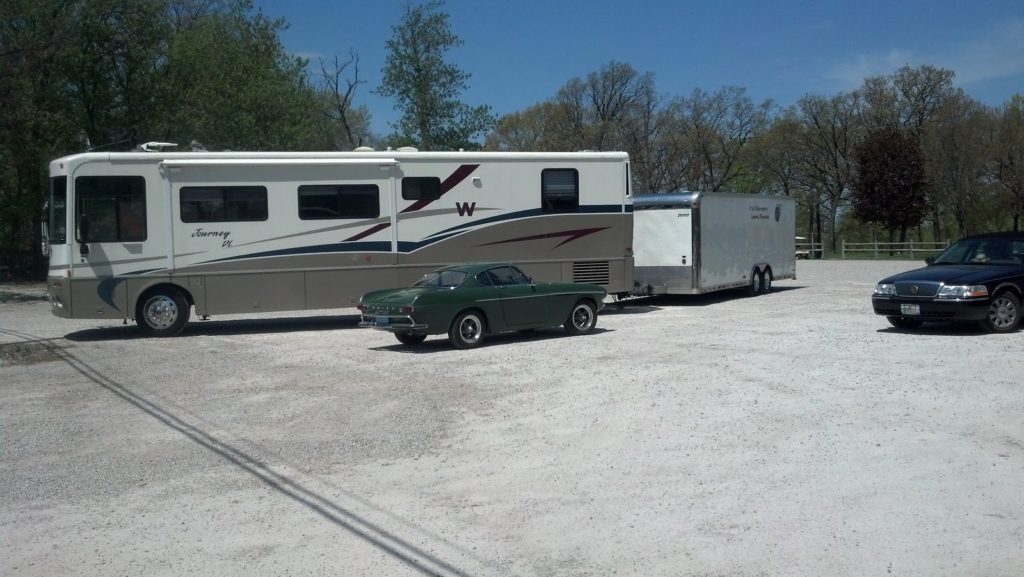 The Buettner bus served as a car hauler, allowing me to deliver Parts Provider Sam Seward’s 1800S from its winter resting place at P and B Motorsports

I brought the video from last September’s Road America outing and Race Engineer David Farrington was able to process and integrate Saturday’s Race 1 video/data so we were able to talk about how I could improve my driving performance.

The data acquisition has been of limited value to date, but we discussed how to be a bit faster out of a few of the turns, recognizing that the segment data would show us if different gear selection might pay off. And indeed it did! We found we could pick up a full tenth of a second between Turns 5 and 6 (circled in black) by coming out of 5 in second rather than third.

Vintage racing is as much about friends as it is about cars. Once again this year Volvo 1800philes Chris Clemmer from the northern Chicago ‘burbs and Jan Efverlund from the northern stretches of the home country of Sweden graced our paddock. Jan brought copies of the Swedish 1800 magazine chronicling his experiences at the 2012 Spring Weekend. 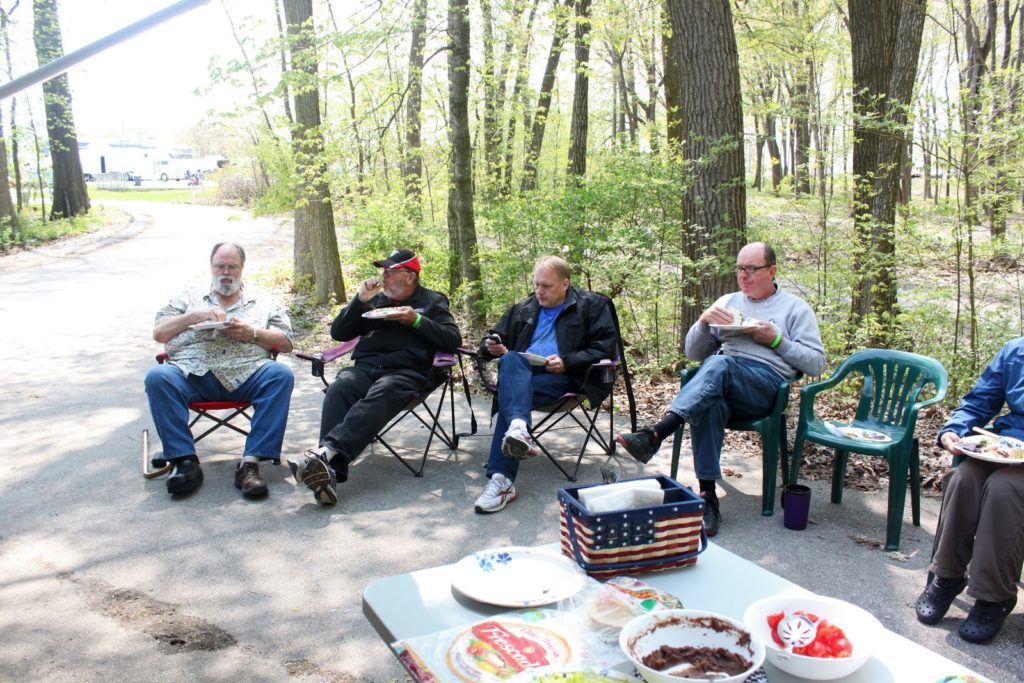 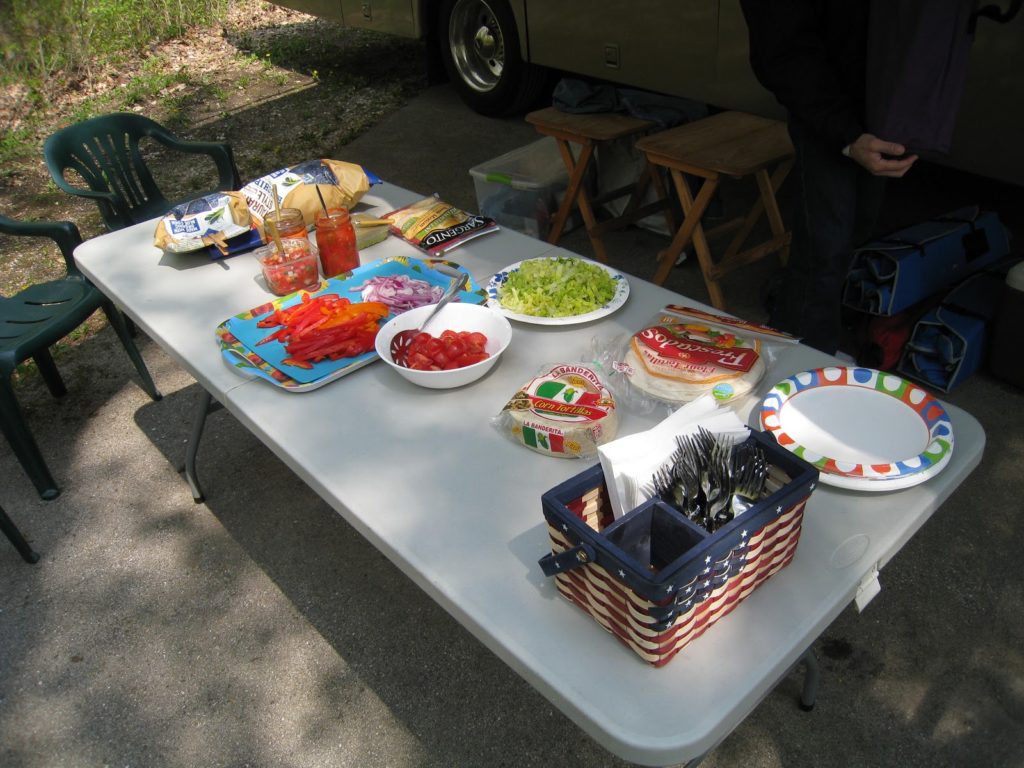 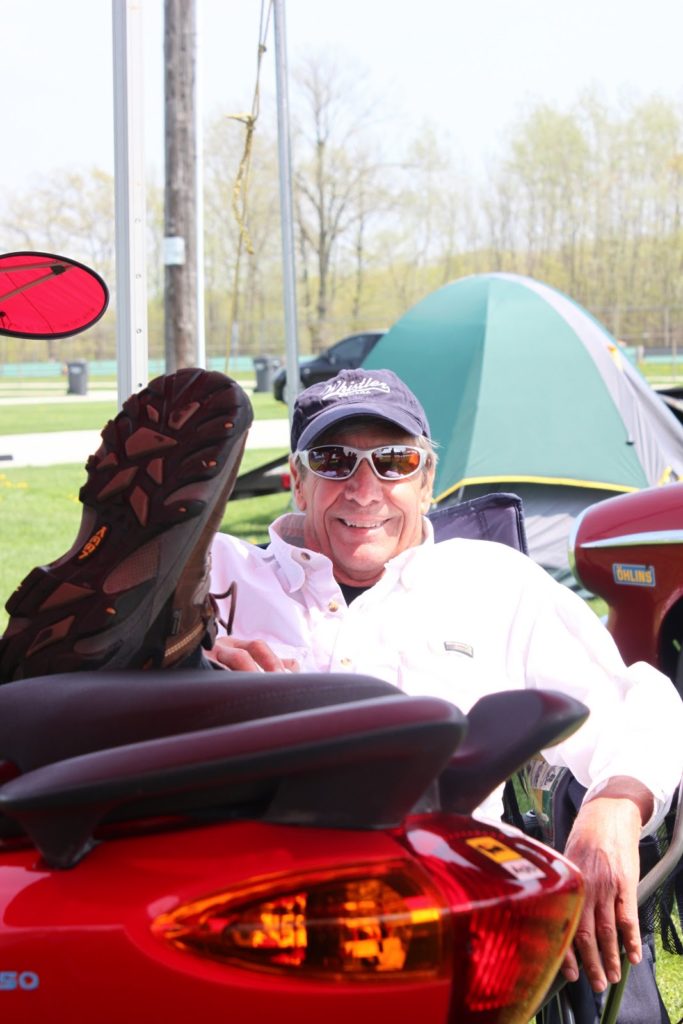 The real fun for the weekend came on the single morning race Sunday morning. We had a split start with a several Corvettes and a few Porsches getting the green before our Race Group 3 came under the bridge. There were five us in the hunt and the start – Wagner, Jagusch, Perry, Adeleman and Friewald.

This 15 minute video is really worth watching. Without a doubt this was the best racing I have experienced. Bob was faster initially on the straights, and I could catch up in the corners. I decided to push the brakes a little harder than I had in the past, and well … take a look to see how it all turned out. Click on the > in the image. 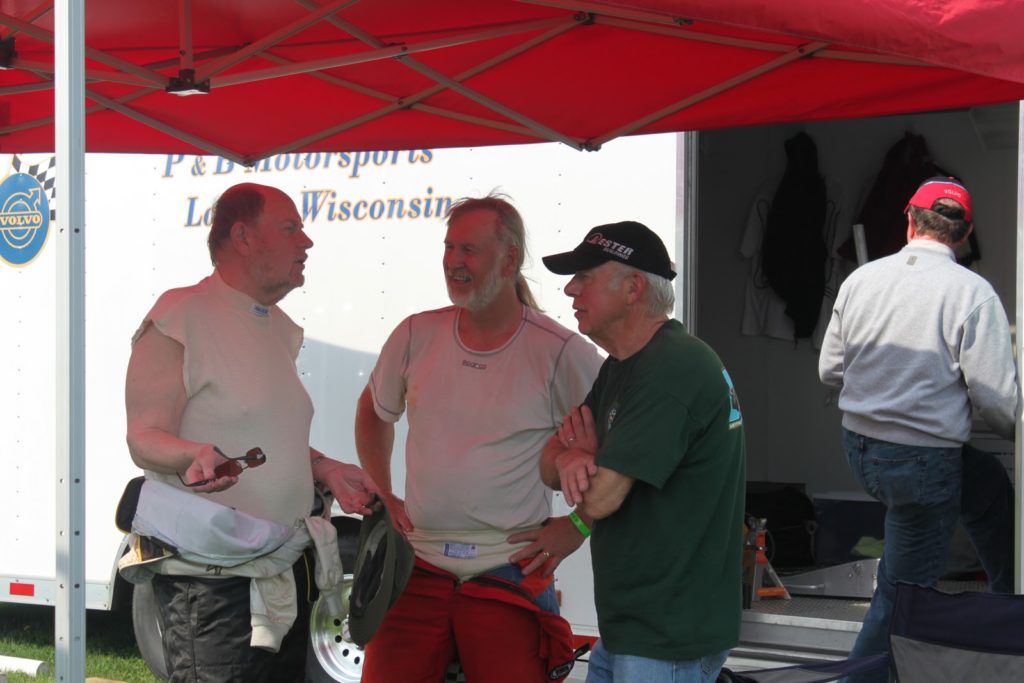 Bob Wagner is a real gentleman racer. The post-race discussion with Bob and Ray of what happened brought smiles and promises of ‘next time’ (Phil Koller photo)

Our next race is the Blackhawk Classic, South Beloit, IL. Time to hit the shop and change a rear axle for the shorter track …

Here are some bonus photos from Spring Vintage Weekend. 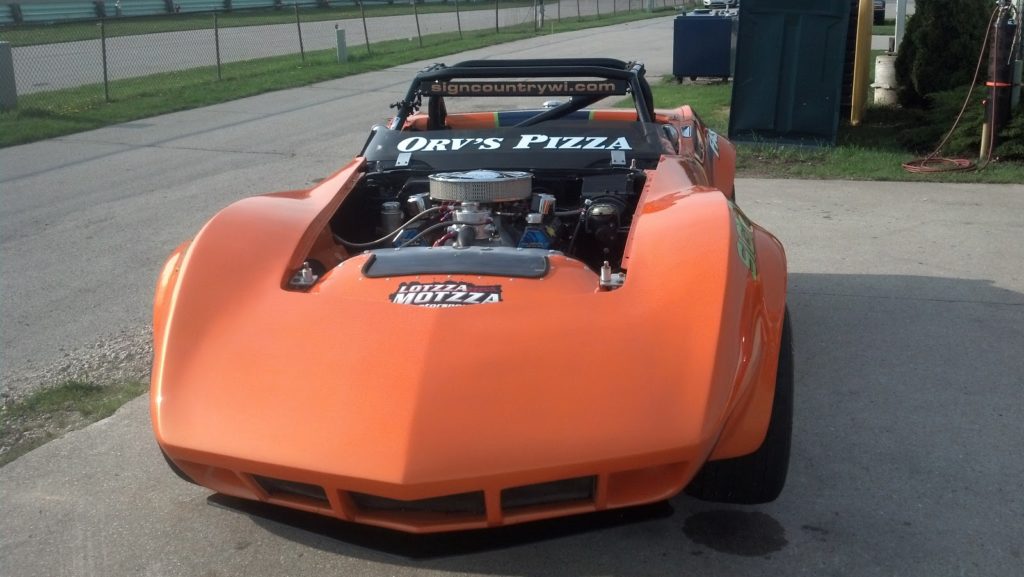 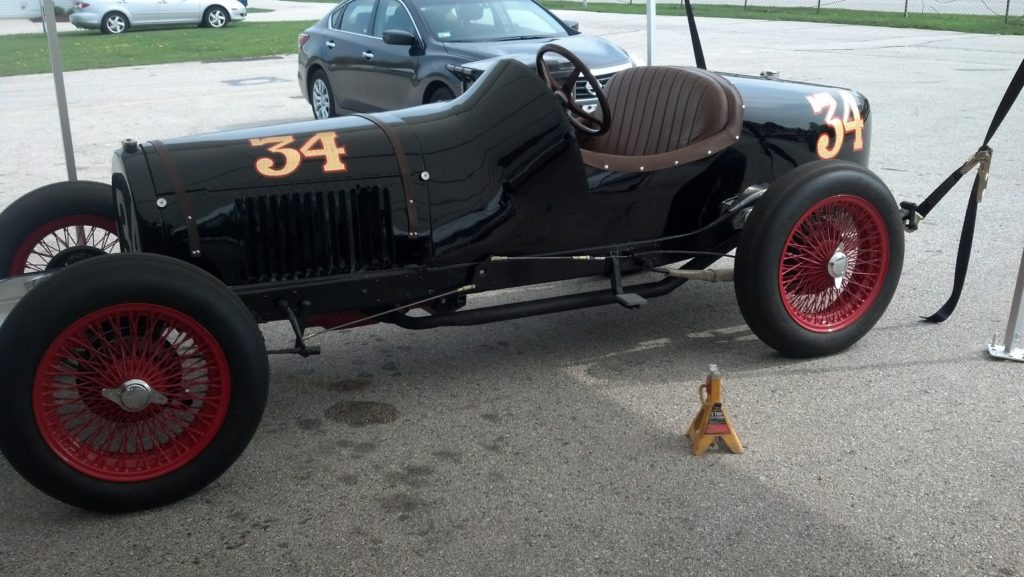 At the other end of the vintage spectrum. 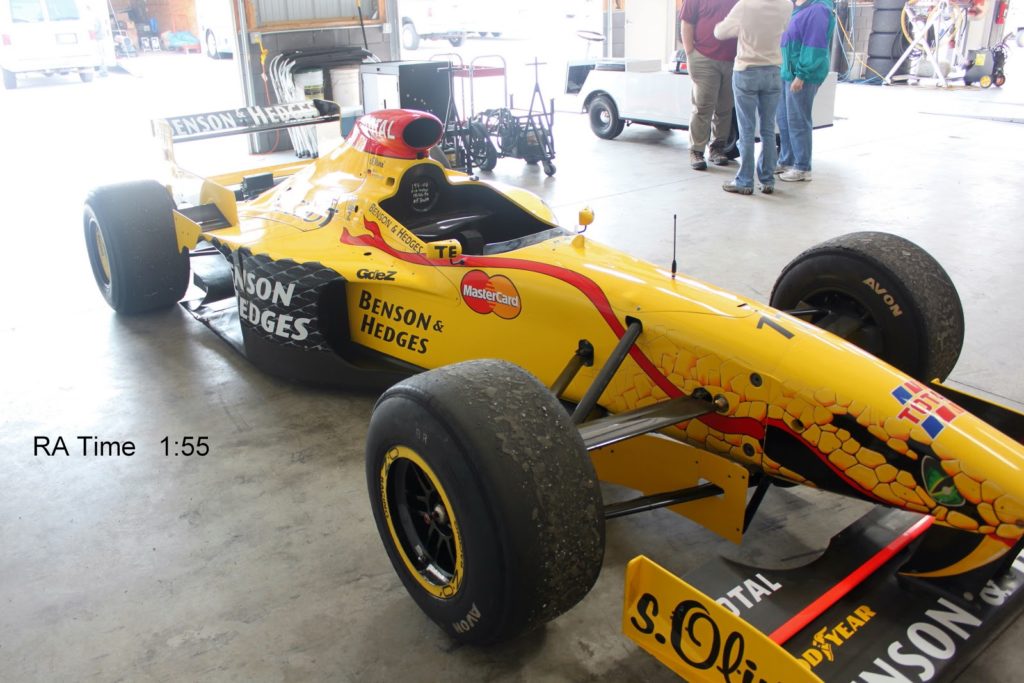 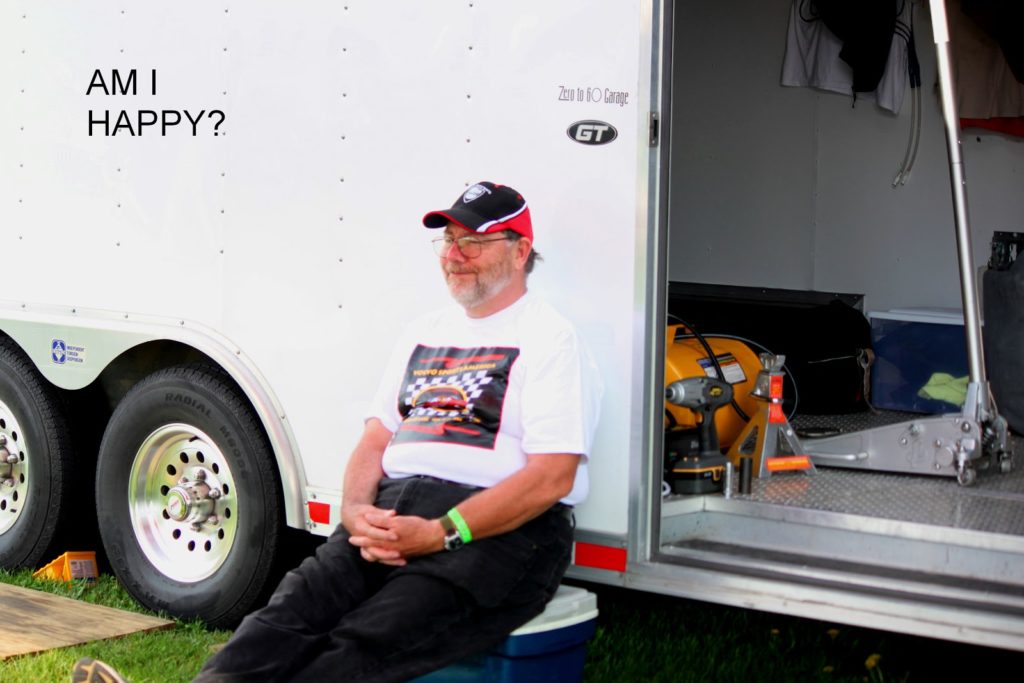 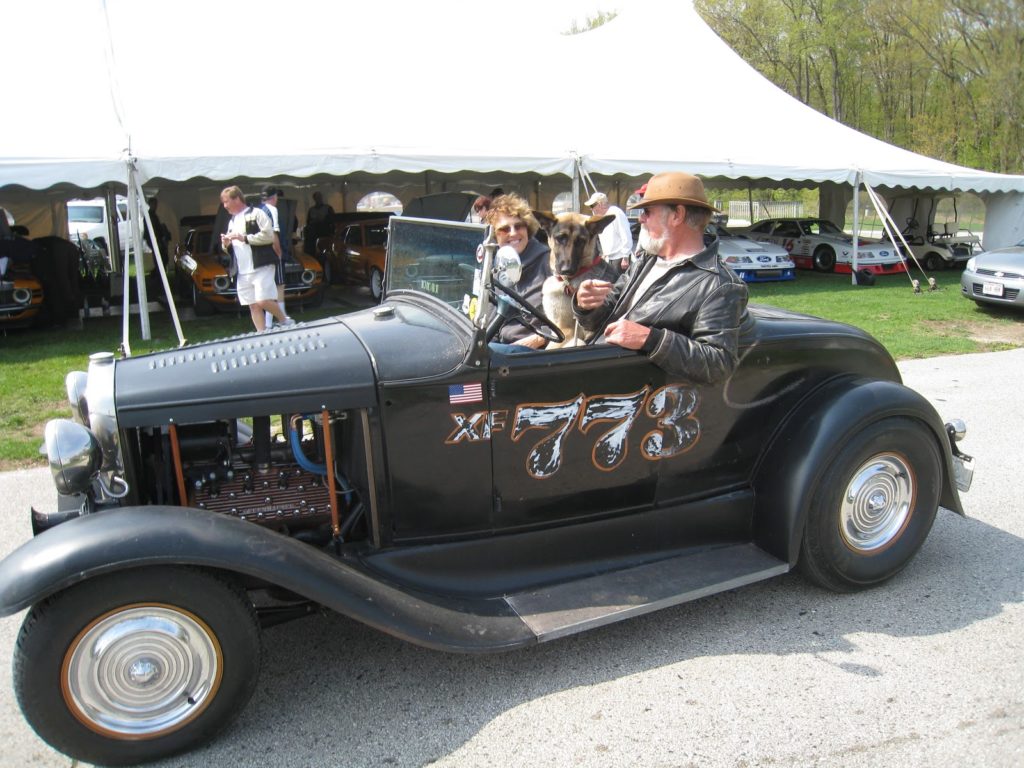 I wanna be this couple’s dog! 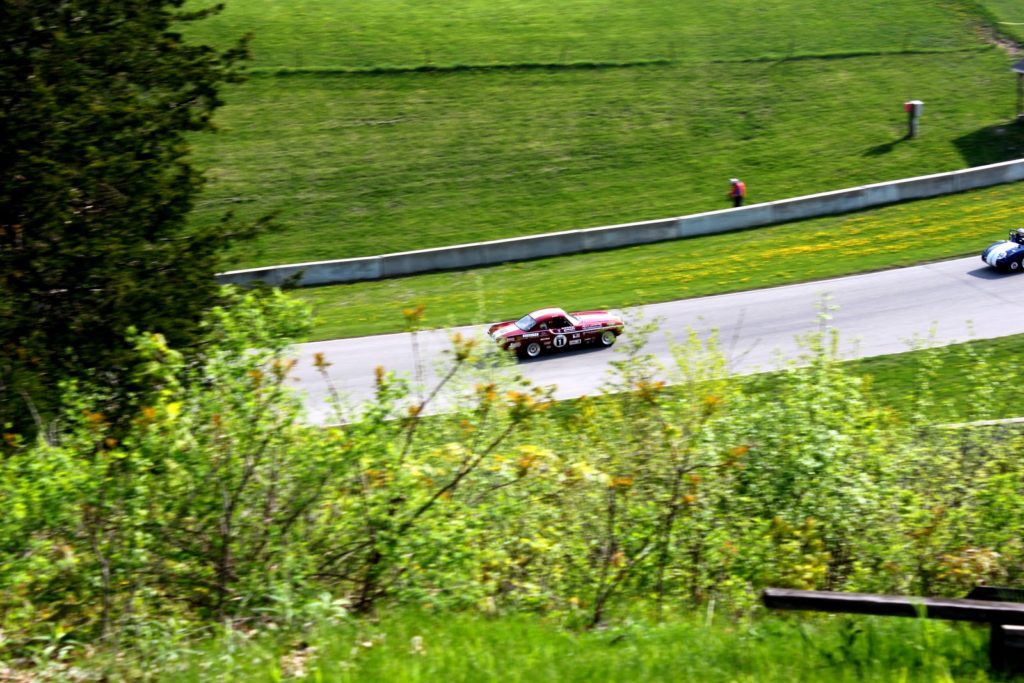 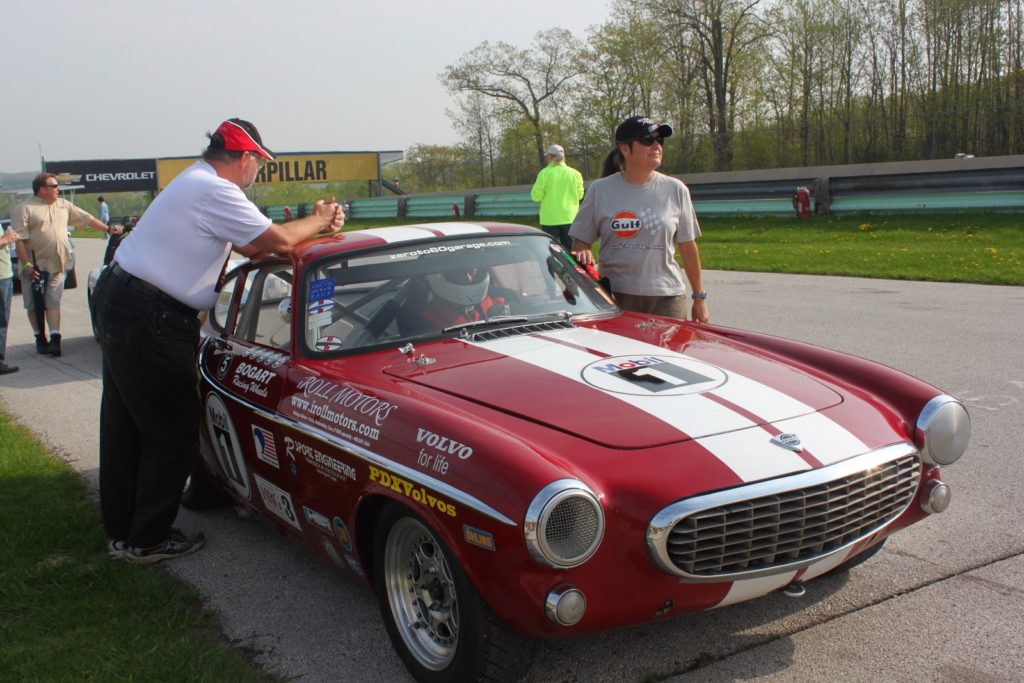 Joy really wants a GT 40 to go with her T–shirt. Who am I to deny her? (Phil Koller photo) 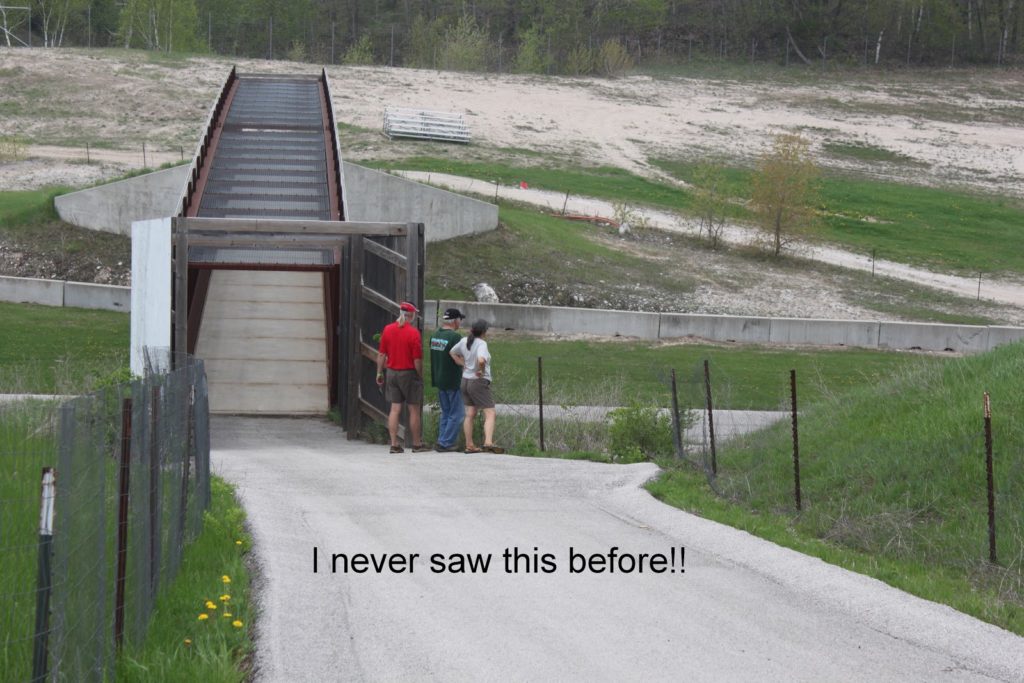 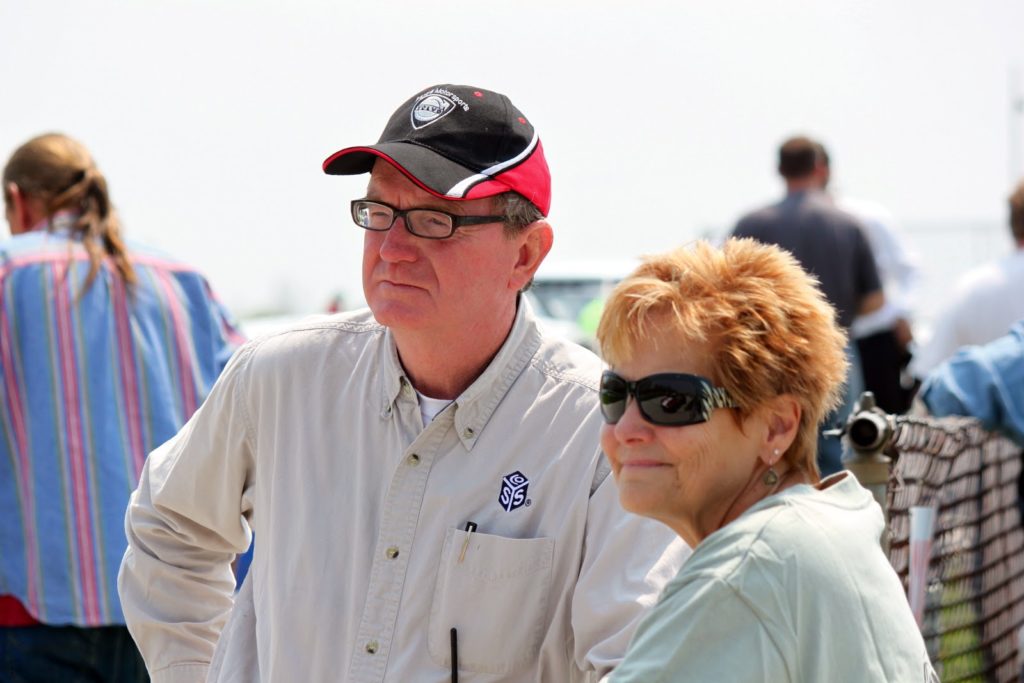 My favorite photo of our friends and teammates, Dave and Pam Buettner (Phil Koller photo) 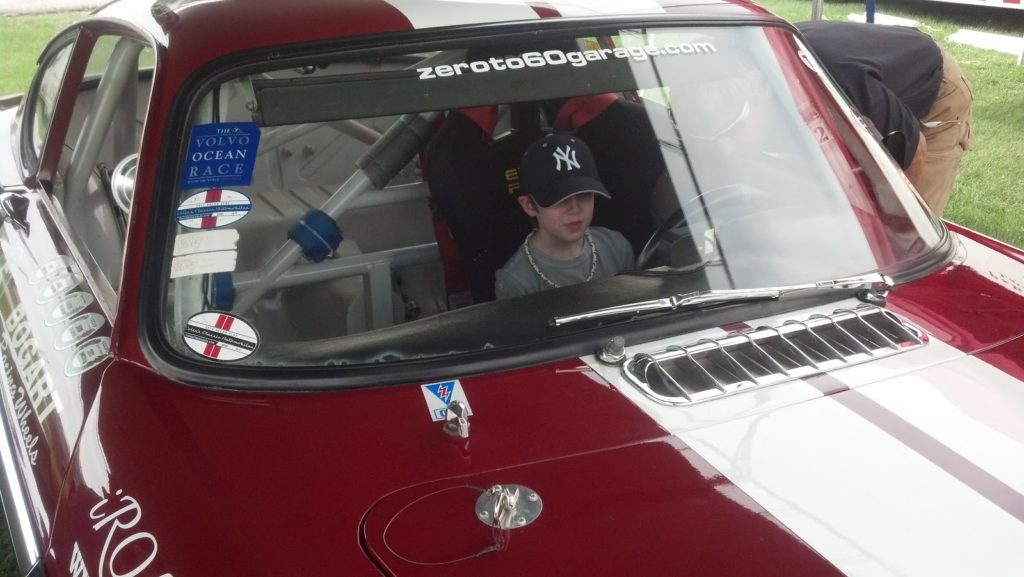