Asphalt rollercoaster. Going over a waterfall in a race car. That’s what it feels like at Road Atlanta. This 12 turn course was one exciting experience.

I took the twin-ribboned carriage road down to Chattanooga, TN to meet up with new southerner/Race Engineer David Farrington who had worked over the winter redoing our data acquisition system. We needed some time to get it reinstalled in the car, so I was able to spend several days out of the ridiculous “spring” weather that the Upper Midwest was suffering through. 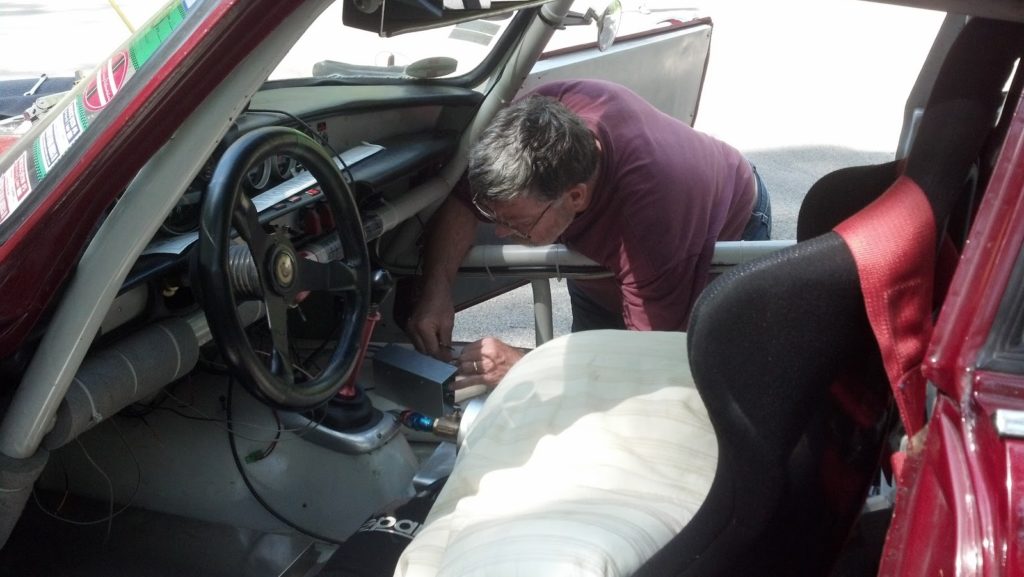 Farringtons now live in a beautiful, heavily wooded rolling development in Ooltewah. If they lived in Wisconsin we would install a chair lift on their driveway and call it a ski hill. So we worked in the cul de sac down the hill and the equivalent of a racquetball workout going back and forth to the house. Several days later, with things hooked up we headed for Braselton, GA and Road Atlanta. 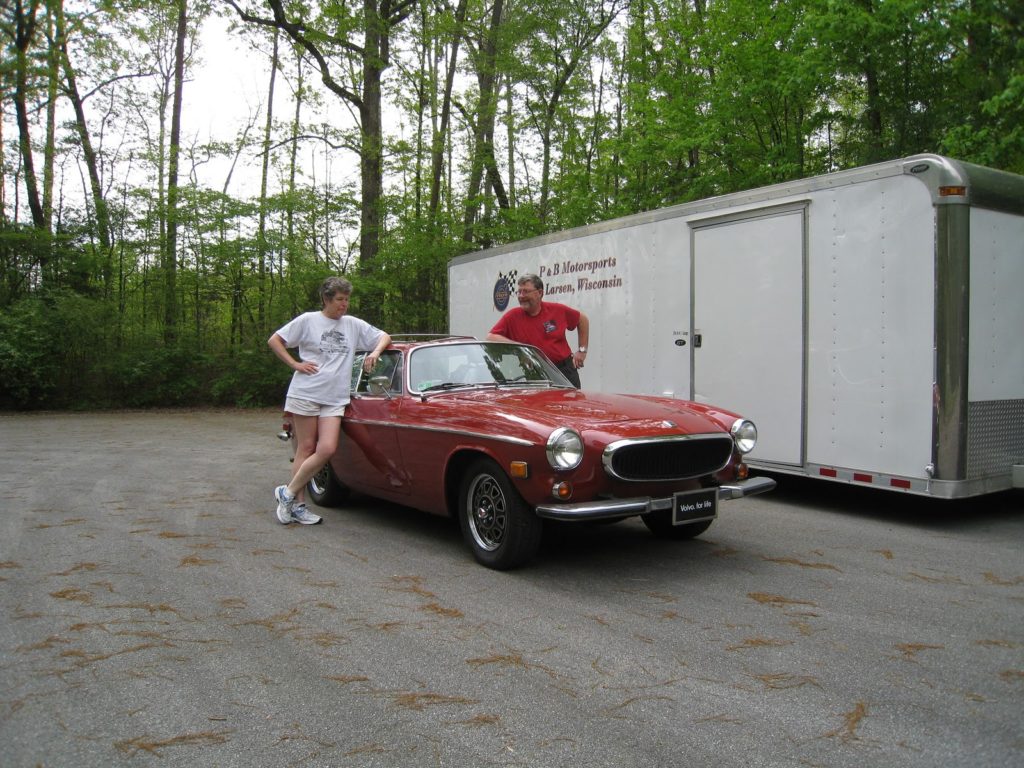 Arriving on Wednesday, a full day ahead of when we actually needed to be there, gave us plenty of time to do the final preps.  Unlike Road America, rigs are staged and allowed to enter the paddock only a few at a time. Even though we arrived at 2:30 p.m. the upper paddock was already filled with lots of big-rig teams. But Southern hospitality among the HSR staff was really evident. People were just so darn friendly. We ended up in a location called “The Swamp,” apparently mosquito haven. Crew Chief Dave Buettner, Pam and Sparkie V (i.e the fifth Boston Terrier named Sparkie-makes it easy to remember her name) arrived in the Winnebago on their sojourn northward later in the day. Race Coordinator Joy Perry (she got promoted from Chief Torque Wrencher over the winter) flew in to Atlanta on Friday morning and was delivered to the track by our niece/chauffer.

We spent Thursday doing final preparation on the car, including a complete oil change – removing all the lines, the oil cooler, the Accusump, everything.  Based on the number of cars that came in on the hook or rollbacks with significant damage for the $300 test day, they might have saved their money too. It was a sobering prelude to a fast track that can be rather unforgiving.

Over the winter David Farrington had come up with a plan to replace the EGT thermocouples with dual lead units so we could monitor each cylinder’s performance with our data acquisition system. He also designed a new power distribution box that feeds EGTs, AFR, throttle position, braking, and tach into the Race Technology DL1.
Of course, no change is without its challenges. We still need to work on getting some of this working, but Dave Buettner was able to use the EGTs to do some fine tuning of the engine. We also tried out a set of Kenwood radios to aid in our communication.  All of this is going to take some more work before the next race.

Jeff and Bridget Babcock pulled in with 122 Thursday afternoon completing the Volvo contingent. Doug Senk was also able to plow his way out of the Iron River, WI snow banks (literally) to join us as well. 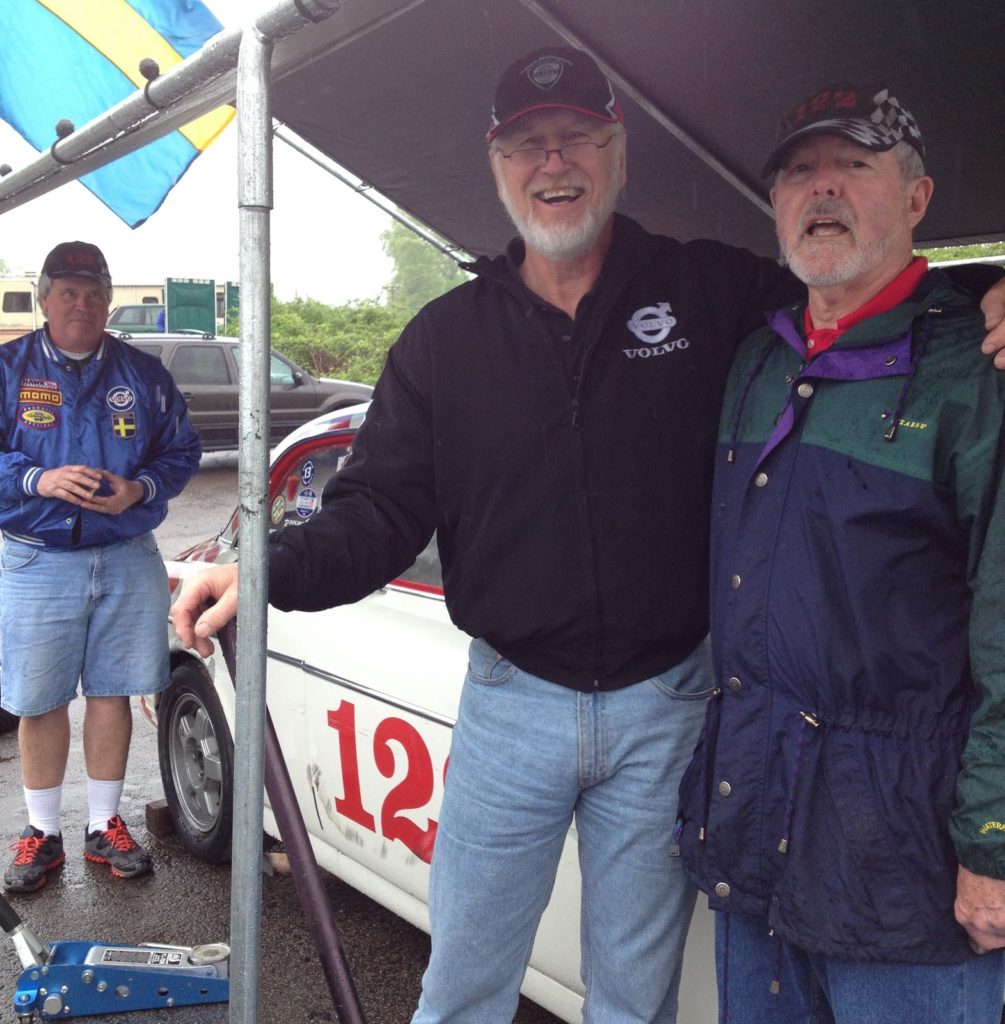 We flew the Swedish colors best we could

We got out first, first-hand look and run on the track from on a gorgeous Friday morning. What an experience it was! There are several blind spots where the track just drops away.

I had watched a Skip Barber track tutorial many times over the winter, but while I knew some reference marks, it did not prepare me for the real thing. (This sort of reminds me of the discussion that has taken place over the years about whether doing “virtual dissections” adequately prepared medical students for the real thing. I think not!) In hind sight, I wish I had used the driving simulator at Zero to 60 Garage.

The elevational changes of Road Atlanta are amazing. Hence, the “asphalt rollercoaster.” 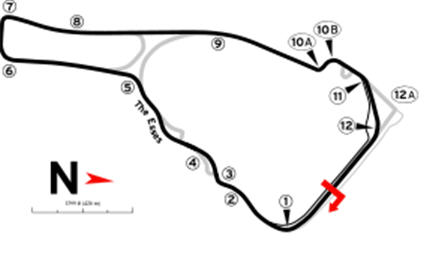 Coming off the front straight, Turn 1 leads steeply uphill to Turn 2, which you cannot see, but for which you better be set up for. Then entering Turn 3 you are head downhill immediately and cannot see where the track is beyond it. There is one Triumph driver (thankfully very alert) who probably wondered what the hell I was up to on my first practice run.  It’s there in the video … (see below)

The Esses are fast downhill into Turn 5, which can be negotiated at high speed by aiming for a hut on Driver’s Right and tracking out over a bit of a curb on driver’s right. At least it works when the track is dry. Not so well in the wet!
Experienced drivers use the Turn 5 to 6 region to pass on the inside. A number of others (not me!) headed for the wall after Turn 6. The back straight is a nice run. I found my maximum speed of about 120 mph coming into 10a.

Turn 11 takes place under the bridge. Here is where it got intimidating on my first runs, because one aims for a flag painted on the bridge; as the car crests the hill the track falls away and turns to the right. I kept telling myself the track would be there, but for several laps there was the tendency to lift until I could see where the track led. Eventually I ended up short shifting so I was prepared for the quick pickup in speed leading downhill into Turn 12 and the front straight.

Here’s a bit of video from that run:

By my second run on Saturday I was pretty satisfied with what I was doing, and the laps times kept dropping as a consequence, and felt I was semi-competent. 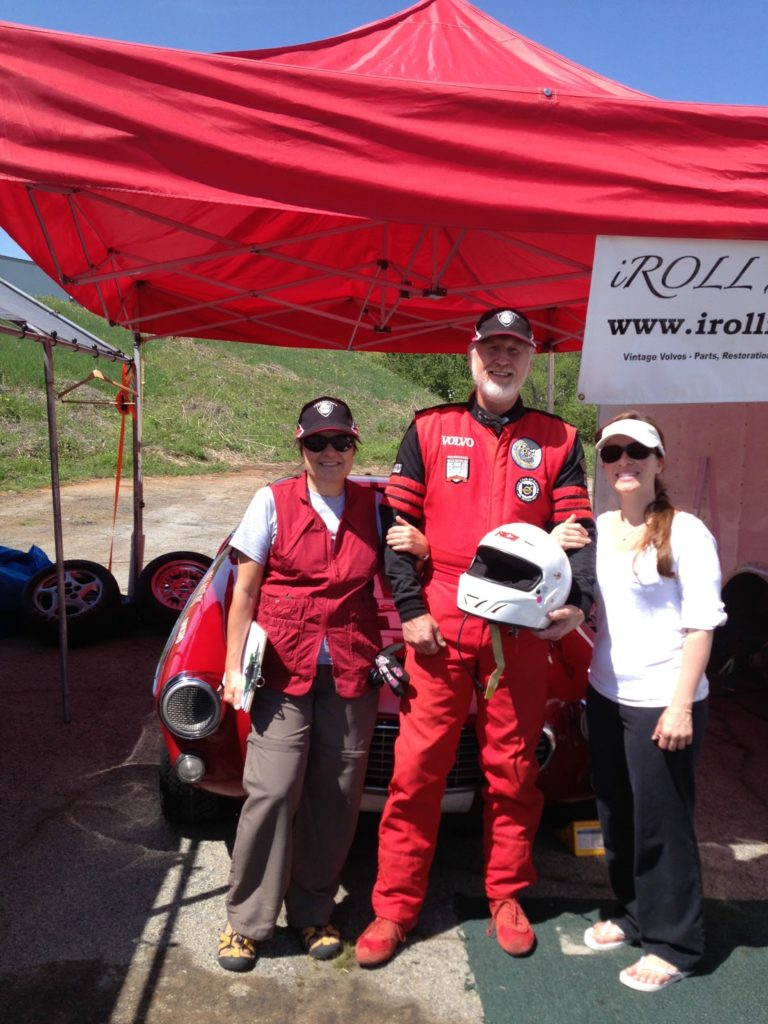 Nothin’ like having the girls hanging all over you, but you get used to it when you drive a Volvo. “Da niece” Paula Nickerson on the right.

Saturday ended with the Jack Lewis Enterprises International/American Challenge, a 71 car free-for-all. It was a “free” addition to the registration, so anyone and everyone that had a running car could show up on the grid. The less understanding did a fair amount of grumbling because yhe poor folks from HSR gave up trying to get people lined by car capability, because the grid was just not big enough.

Here’s a clip from the Challenge Race:

Speed differentials were enormous. There was one big V8 Mustang driver who apparently was not listening to the staff during the driver’s meeting and decided he just could not wait to get around Jeff, so he stuck his LF fender into Jeff on Turn 1. The stewards showed up at our paddock after the race and quickly determined the Mustang driver needed a talking to. Not sure we saw the Mustang back on the track after that. 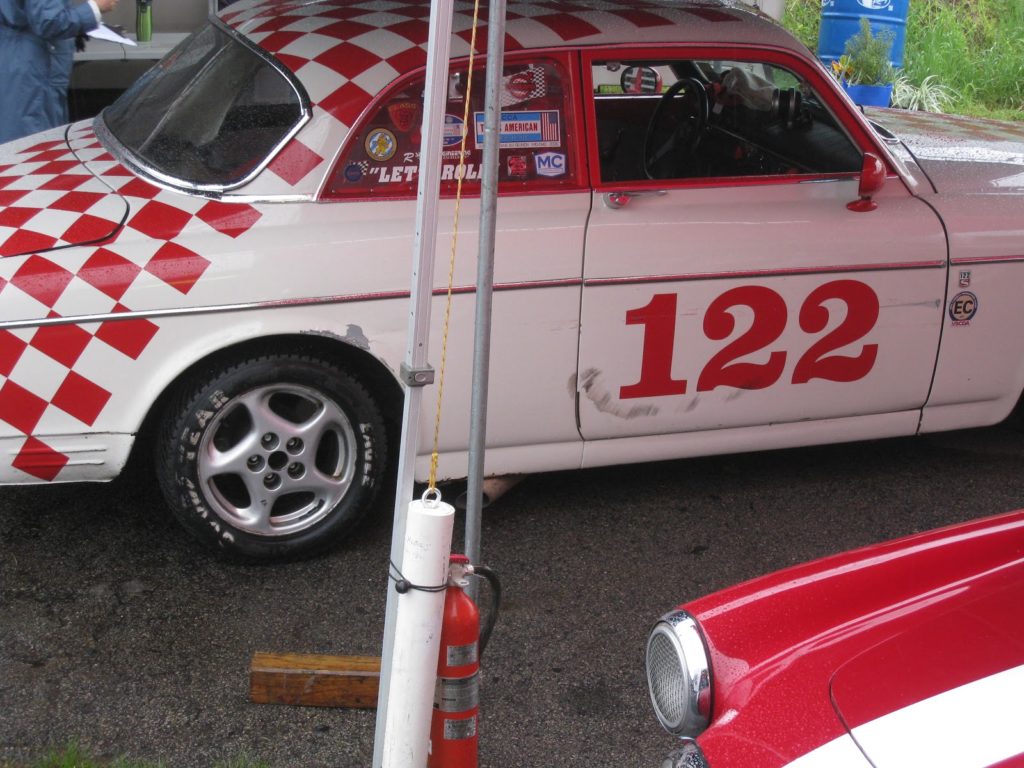 Slight body modification thanks to an overly aggressive Mustang driver in Turn 1.

The Mitty had significant sponsorship from Classic Motorsports and eBay Motors. These folks threw some really great parties, Thursday, Friday and Saturday nights, complete with lots of good beer and food. 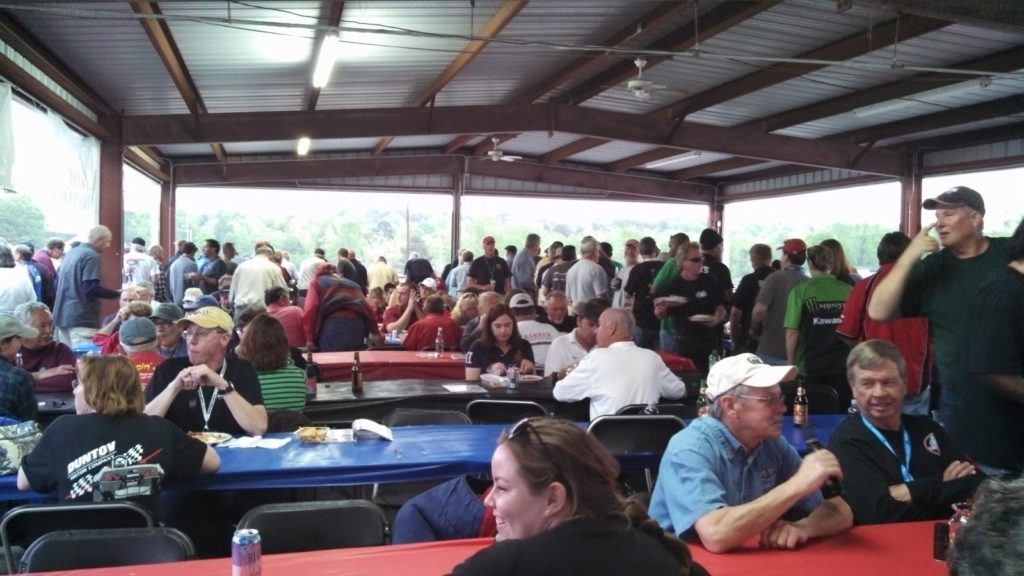 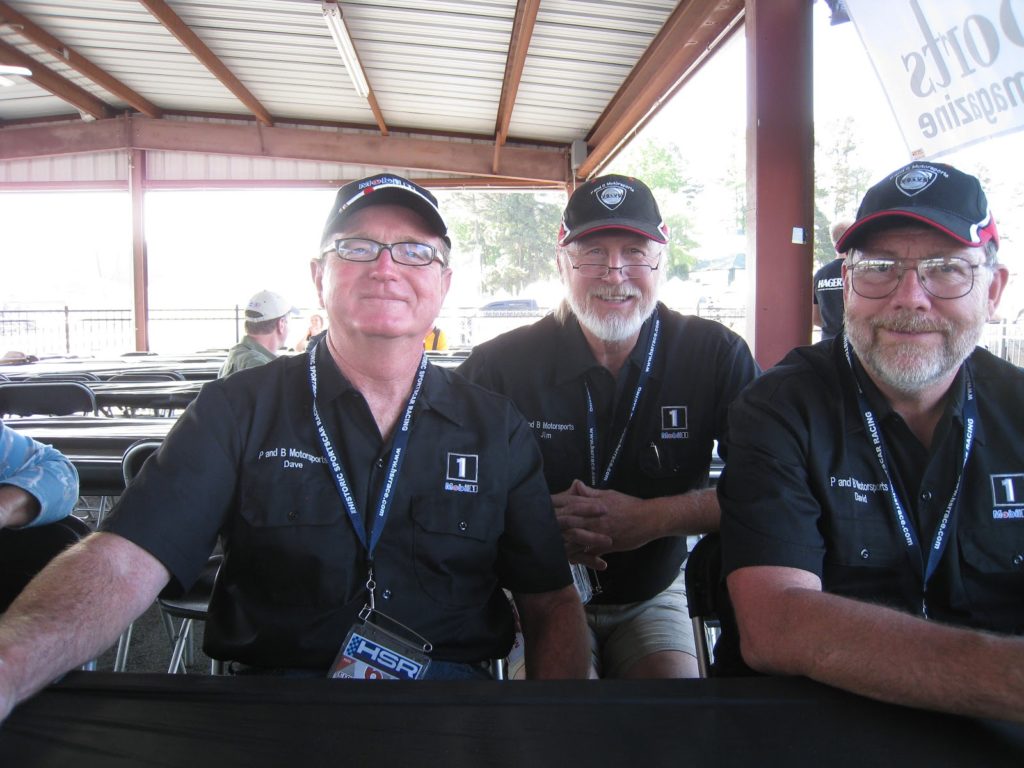 I achieved my best lap time during Group 2 Feature Race 1 on Saturday. Here’s some edited ride-along video of that run: 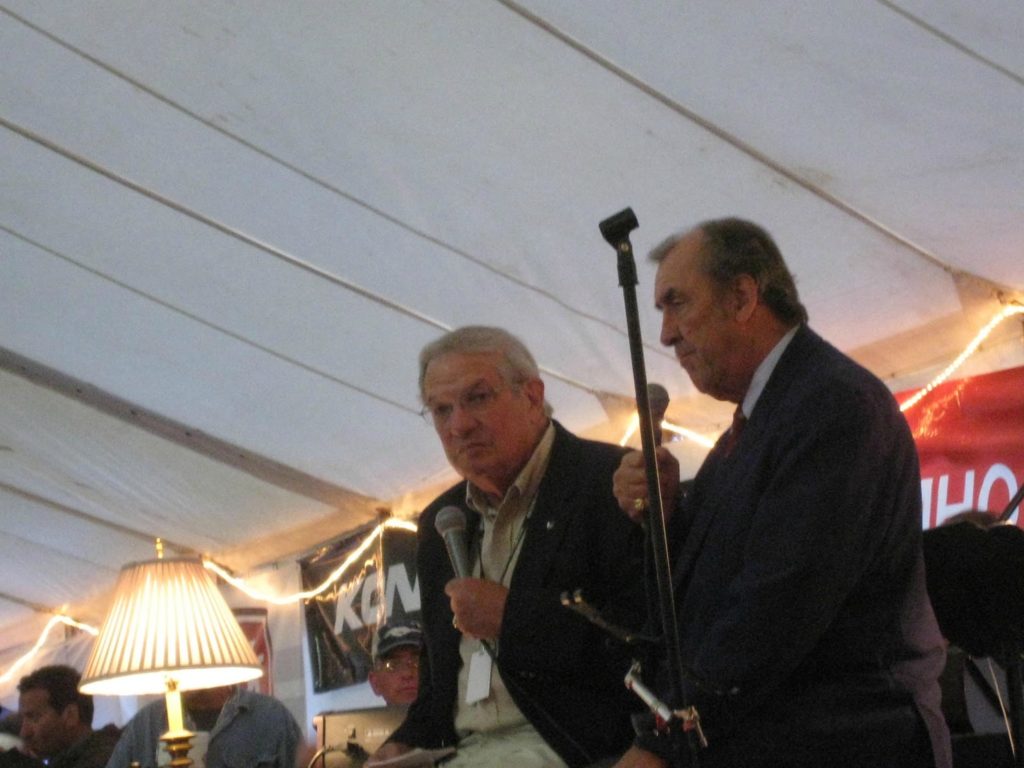 On Saturday night we were treated to some wonderful stories by a true gentleman of the sport, former drive-anything-well professional racer and now F1 TV commentator David Hobbs.

As beautiful as was Thursday, Friday and Saturday (well, for the most part is was least semi-dry on Saturday), Sunday was the exact opposite. The rain started in the middle of the night and never stopped. And it was anything but a light rain! A whole lot of people abandoned he venue. 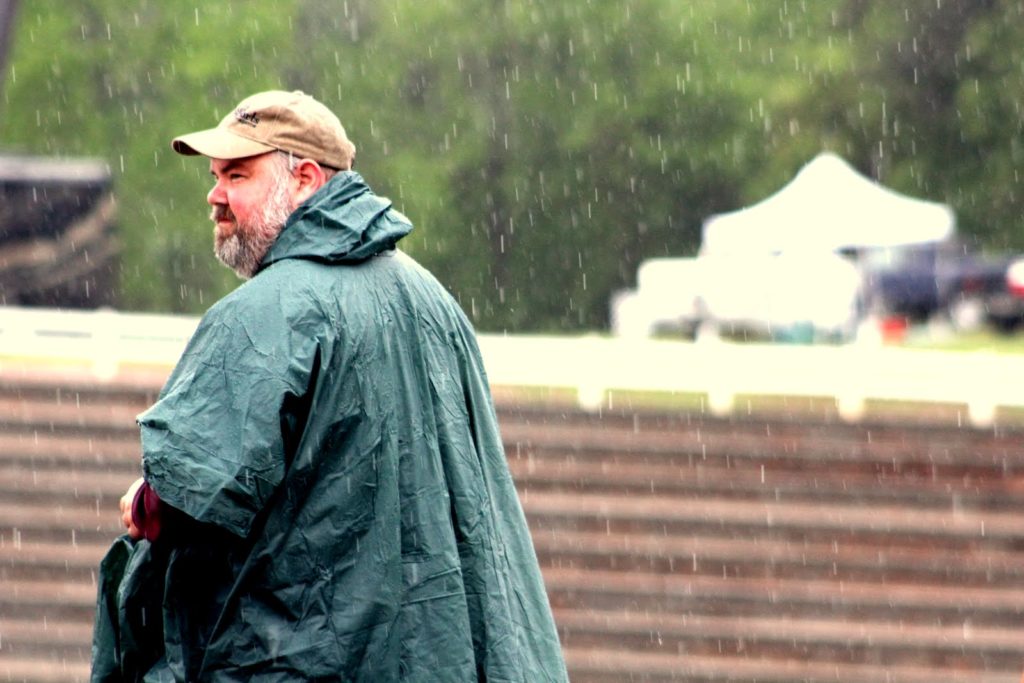 With their slicks the stock cars never ran, and HSR combined Groups 2, 3 and 5 into one feature. Several times I hit pools – not puddles – of water that slowed the car quickly, and several times I felt the car get up on top of the water and begin to hydroplane. Coming out of Turn 11 and into 12 was a sweat-maker. Former IMSA champion and 24 Hours of Le Mans driver Doc Bundy gave himself a thrill when he did three 360’s in his ‘64 Lotus 23B coming onto the front straight, and was fortunate to end up facing the right direction in the middle of the track; he still ended up 2nd overall. All in a day’s work, right? 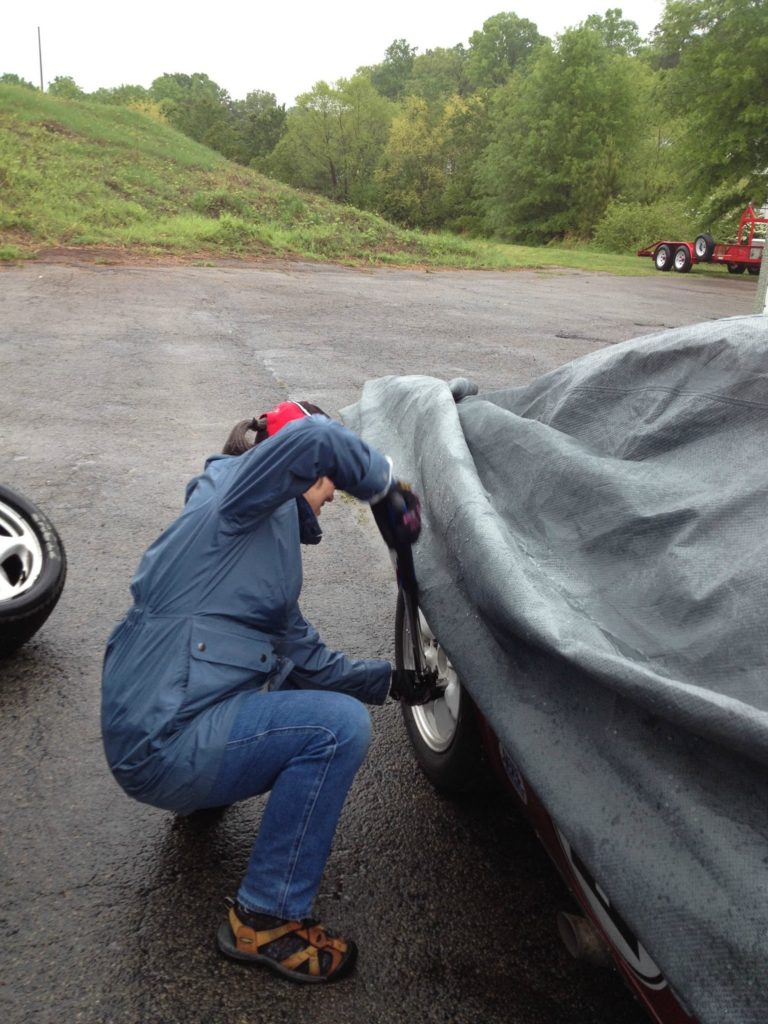 Everyone has their pre-run job, even in the rain. Joy’s includes checking the lug nut torque with her new electronic torque wrench, a slightly delayed Valentine’s Day present. 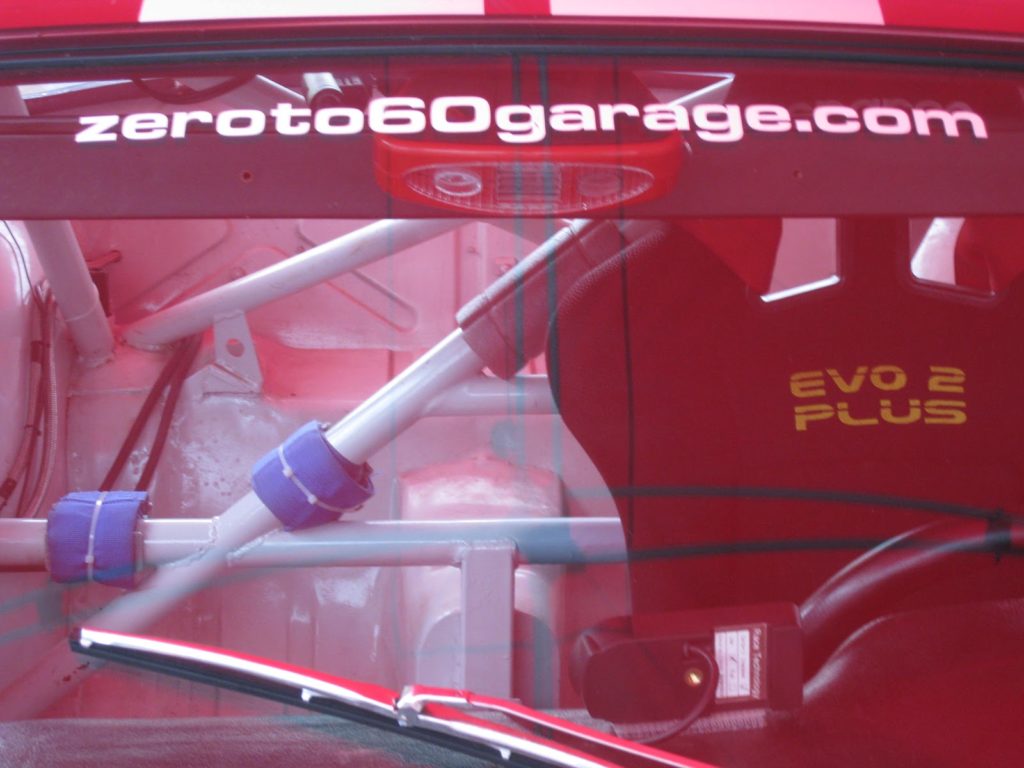 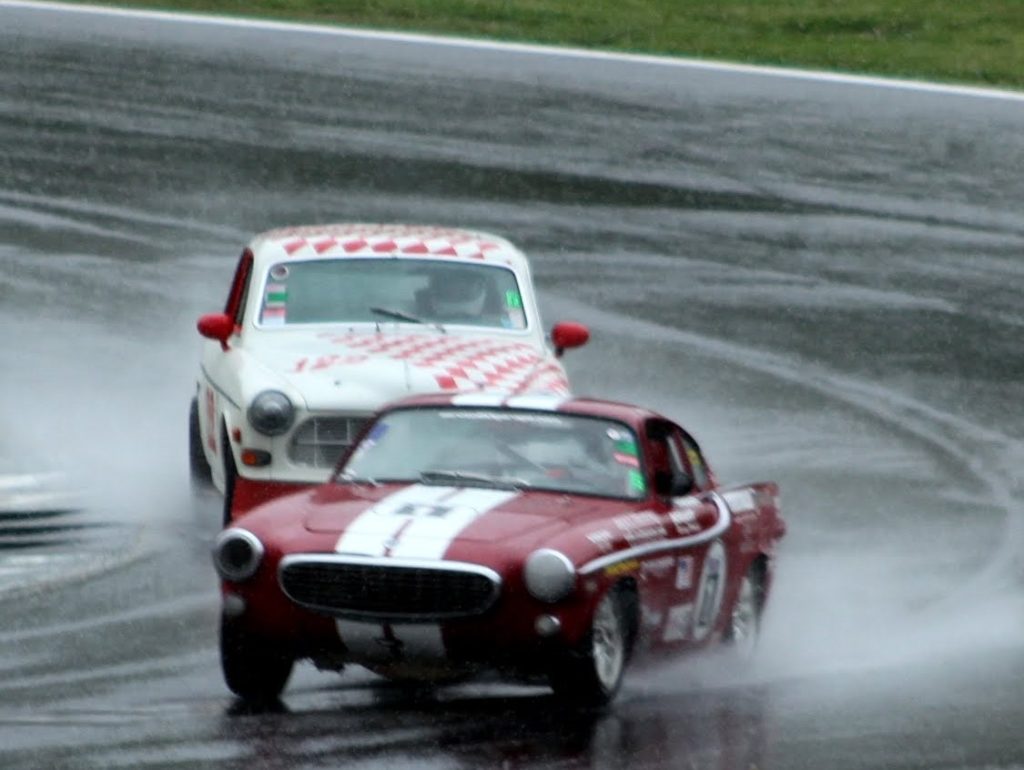 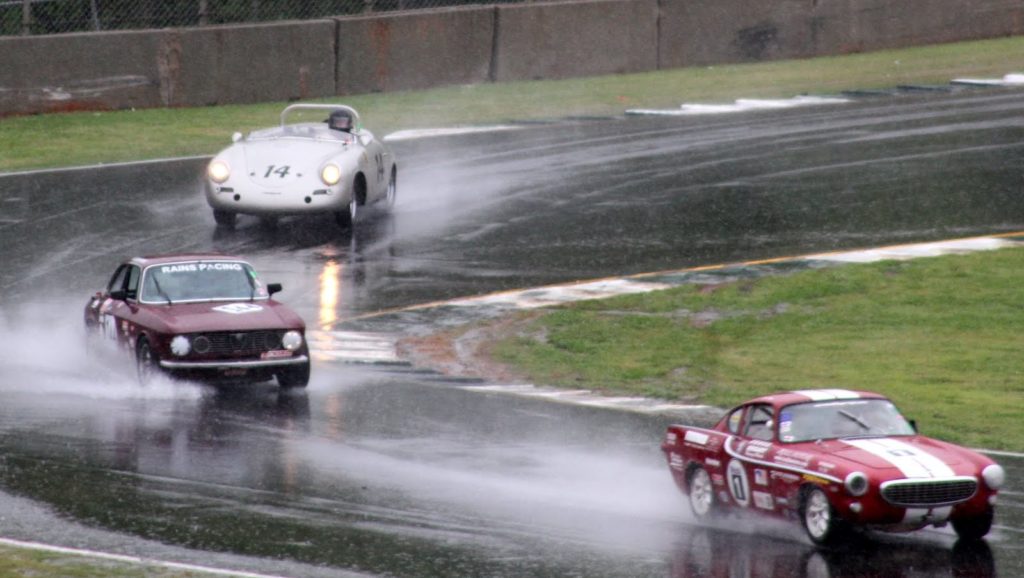 We took 3rd in our class and felt lucky to get the car back in the trailer intact. This was, without a doubt, the worst conditions in which I have ever driven. There were rivers all over the track.

The car ran great all weekend, perhaps the best it has done on a consistent basis. Road Atlanta is a special place and HSR is to be commended for their friendliness and a race well run. I can hardly wait to make this 2000 mile, $2300 trip and get back to the Peach State again. 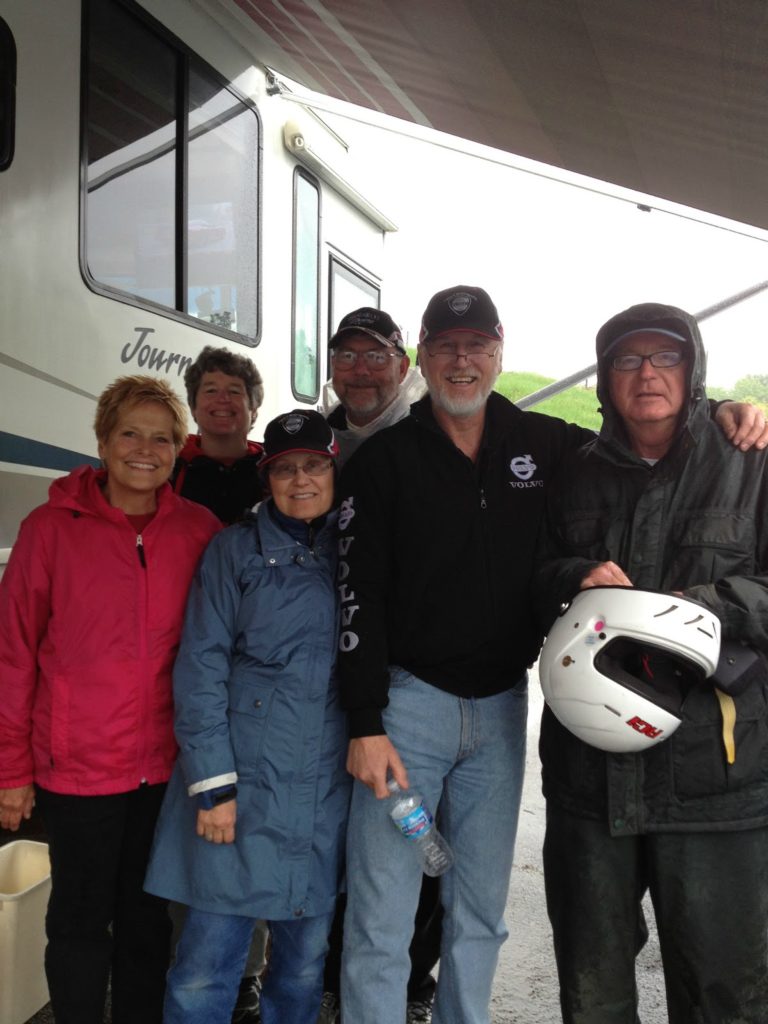 Next up, Spring Vintage Weekend at Road America, May 16-19. Need to go watch videos and review track data from last year. My goal is to break the 2:50 mark this year! Look out Randy Probst. (Or maybe not.)