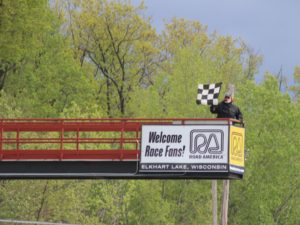 Just like in major league baseball, a season opener for people racing in the northern climates can be a real crap shoot, ranging from warm and sunny (rare) to rainy (likely) to cold and raining (more likely) to solid rain (not so likely but not impossible). Spring Vintage (well, the calendar says it was spring) fell into the ‘more likely’ category at Road America. But it was not so bad inside for the season opener of P and B Motorsports. 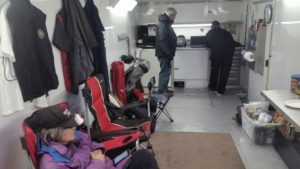 A little heater can make a big difference

Actually, these old naturally aspirated buggies rather like cold air, and  we did pretty well for track times and results.  On Friday. though I did not break my fastest lap record, I came close.

We had the entire crew plus at the event. In addition, some acquaintances – now friends – from Florida escaped the sunny heat with their second generation Miatas on their bucket-list tour of iconic road race courses. Originally intending to do only the Road America Track Day on Wednesday, SVRA allowed them to run in the Miata Series on the weekend. 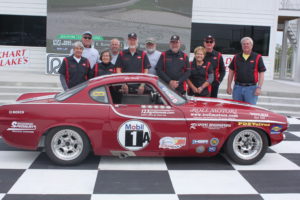 The P and B Crew (Phil Koller photo)

In fact, in doing so SVRA was beyond generous in many ways.  Chad Jorgenson’s car had, um, ‘issues’ on Wednesday. When he described the uncertainty of having a car that would make it around the track, they told him to give it a try, and if the car ran, come back and pay the registration fee; if not, don’t worry about it. Chad’s car ran, and both he and Phil Brown had a great time. In fact, Chad beat SVRA  President and CEO Tony Parella in the Sunday Miata feature. 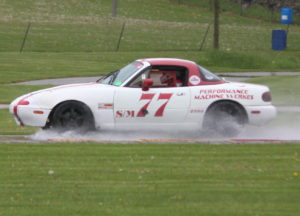 For the most part our weekend was mercifully uneventful. The air filter housing needed a little modification … 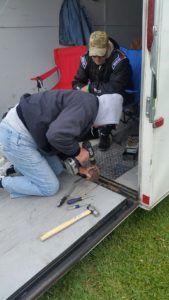 And another minor issue  that could have become a big one– a motor mount bolt that lost its nut – tried to jump out but fortunately my keen-eyed under-hood inspection caught it in the nick of time. When Dave Buettner is on the crew he jumps in immediately and solves the problem, leaving me to kick back, have another cup of coffee with my feet up and watch. Well, maybe that’s a little exaggeration.

We won our class in Sunday’s Feature Race. I was most proud of myself when I followed Jeff Johnk in his 3L big Healey past Dawn Meyer’s MG going through Turn 5. Dawn’s pretty fast, a good driver, and also lives the Vintage Spirit by recognizing a completed pass and swinging a bit wider through 5 as I took the inside line.  i was pleased I successfully completed an inside pass at Turn 5! 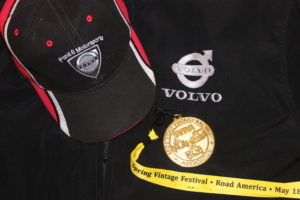 So as soon as we got back I started preparing for a trip to a new track – Virginia International Raceway for the VIR Historics.  Dr. Buettner has installed a new Weber DCO and made a dandy fiberglass air duct and did a little welding on the hood hold down pin mount. I’ve changed brake pads, front rotors, rebuilt a set of rotors, found the source of the erroneous EGT reading and a myriad of other little things that need to be done before a race. Off to Virgina.

Here are some weekend pictures and a bit of my in-car video.

In addition to our own cameras, SVRA mounted a GoPro onto the windshield and posted it. It was shared on Facebook and within 36 hours had almost 20,000 views! Everyone got to see the left hood pin pop out and the hood start to flap around a bit.