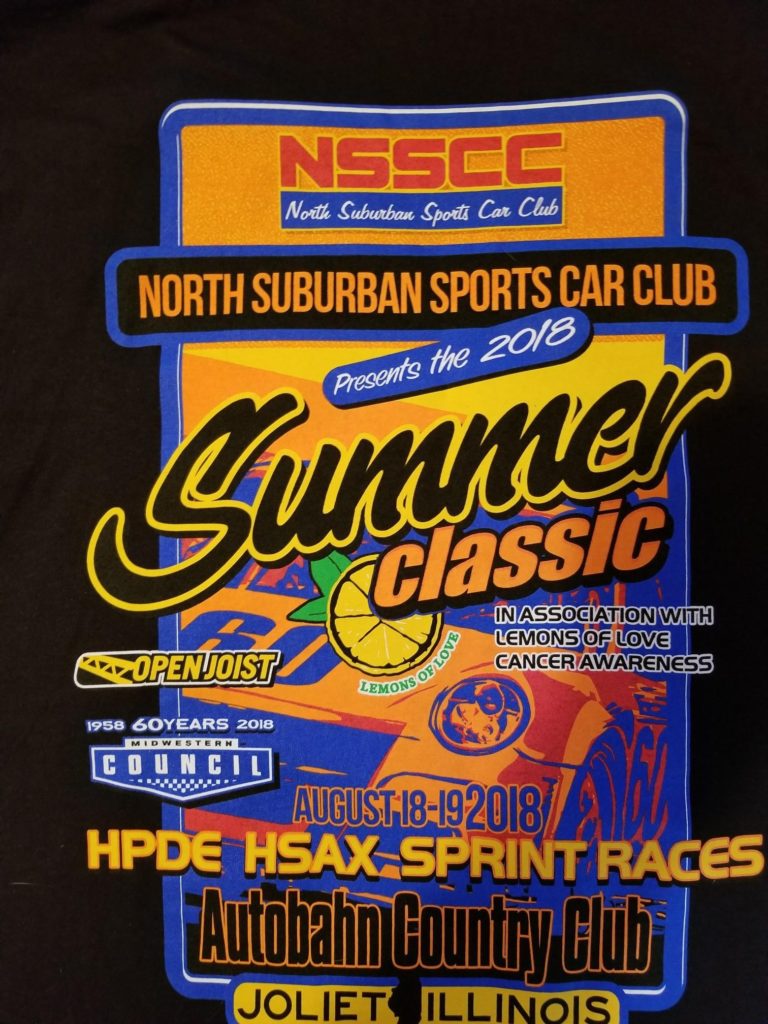 Getting around (finally again) to a report of our efforts on a new track, Autobahn Country Club in Joliet, IL. But first I want to diverge a little.

I decided we needed a backup tranny. My Sellholm M47000 dogbox has served us very well for five years. I change the fluid religiously (that’s as religious as I get), and each time the magnetic drain and fill plugs have done their job. Translated: there’s less metal on them thar gears than there was back in ’13. 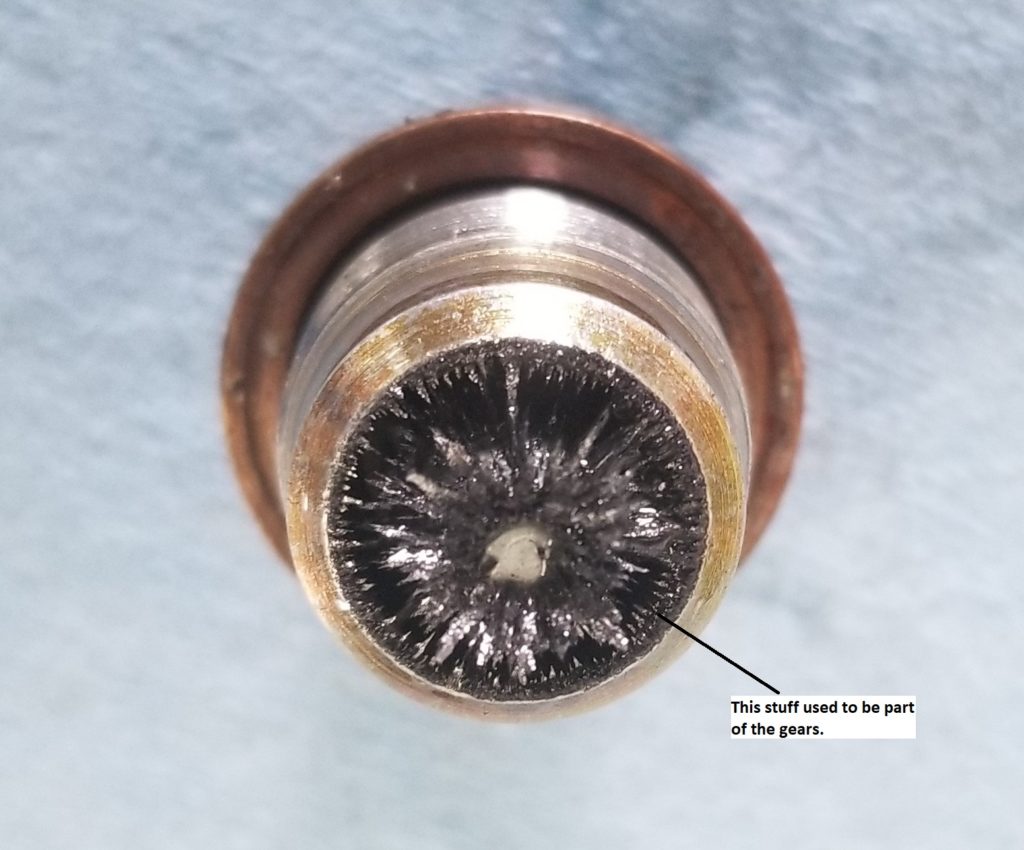 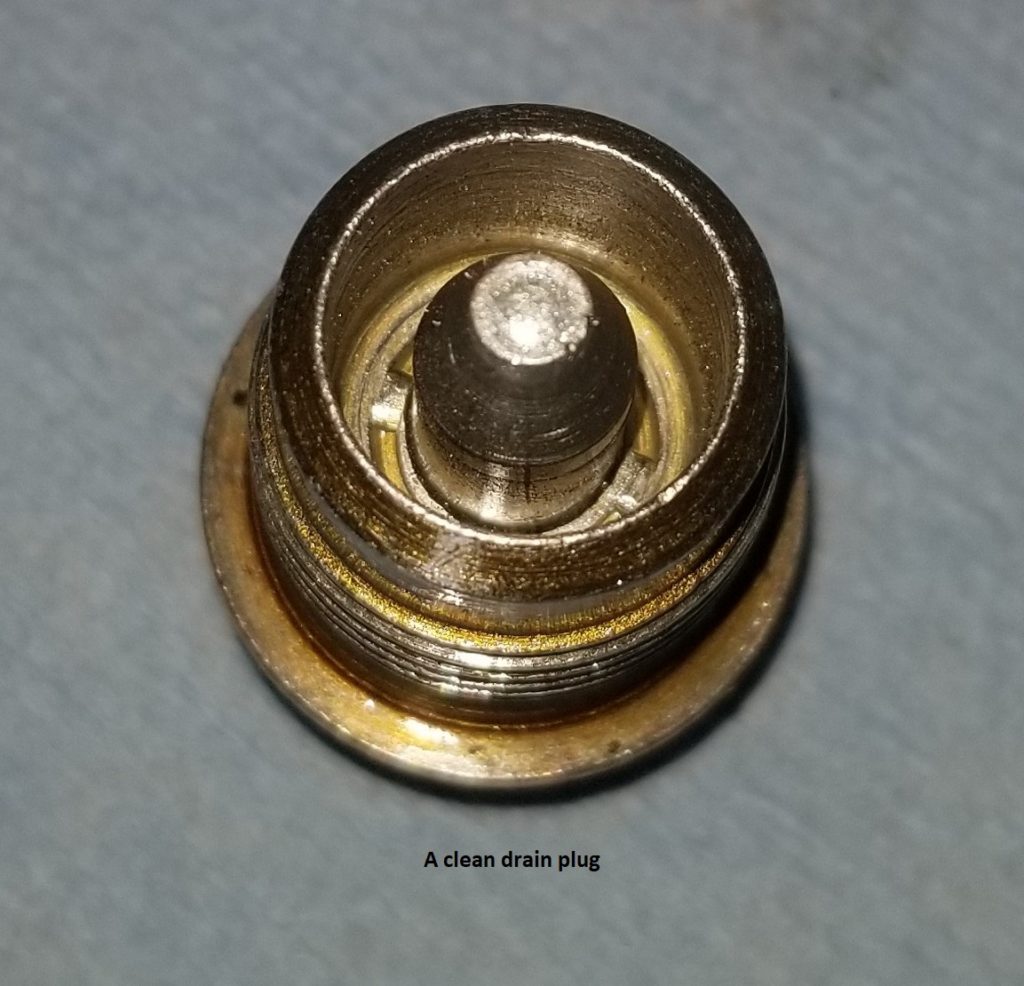 I do a lot less crunching now than I used to, and I almost always use the clutch. I have never had enough guts to NOT use it on downshifts. My SCCA friend Rob Keller is a bit more accomplished than I, and his M47000 suffered a roller pin failure at the June Sprints.

One thing led to another after a conversation with Rob and I decided to order another M47000 from Sweden. Oh boy! Buying a transmission is one thing, importing the damn thing is another whole can of worms. And let me tell ya, guys and gals, the problem ain’t in the eastern side of the big pond.

I got a call from a number I did not recognize. Was driving to a Volvo meet and disregarded it. But unlike most of these unknown number, most wanting to buy long term care insurance (Hey, I’m only 69 going on 24, so what are you bothering me about??) this one left a voice message. And no, it was not a Nigerian prince who wanted to share his $25 million with me. Also noted an email.

Friday, Aug. 24 – FedEx: We need a commercial  invoice for whatever you are getting form Sweden. Call us soon at blah, blah, blah.”

Pulled the car over and decided this one warranted followup. I called …

Me:” I don’t have an invoice.” FedEx: “You gotta have one to clear customs.” And how much was it?” Followed by vague comments that it might be sent back to Sweden.

Scrolling through my emails from my dumb phone after dinner and several beers in Milwaukee, I found something that looks like an invoice. Off it goes. Done.

Monday, Aug. 28,  4:54 p.m. , Email from FedEx “Missing Invoice.”  (FedEx closes at 5 p.m.) Me: “I sent it Saturday night!”  But then I had my laptop and started looking only to discover I had sent them an invoice from something totally wrong. Crap. You know I pride myself on thinking I had made an error once but found out I was mistaken.

Now I really need an invoice from Sellholm and there is none.

Sweden is 7 hours ahead of us. I sent an email. Figuring I better not let this to chance, I decided to call Sweden. Got a recorded message at Sellholm that was all Swedish. Hell, I had enough trouble figuring out the road signs in Gothenburg.

Called my Swedish pilot friend Jan Efverlund. Directly to voice mail. “Jan, I need to talk with you right away. Are you in the U.S. or Sweden?”

Knowing Jan turns off his U.S. phone when he’s home in Sweden, I turned to Facebook Messenger. I know Jan. He’s a Facebook fiend. “Jan, I need to talk with you right away.” Success, within a couple of minutes Jan was on-line asking how he could help And then bless his blonde Swedish soul he calls me.

“I need an invoice from Sellholm and I got a recorded message that says for all I know they have gone on holiday to the nude beach to watch the cows cool off in the heatwave (true story, I kid you not), have a nice day.

Pretty soon my dumbphone is dinging away on Messenger as Jan is on the phone talking turkey, er, Swedish with Sellholm and needs more info. Literally, while I was looking it up I got the invoice from Sellholm. Thank the Swedish gods or the Vikings of the Danes or whoever. The invoice is off to FedEx.

Tuesday, Aug. 29. Me: “Attached please find the correct invoice …” FedEx: “Please verify he Federal TAX number for clearance.” Me: “I don’t have one. I am an individual, not a business.” FedEx: “We need a Federal Tax Number or your SSN, (or you dog). Please fill out Form CBP 5106.”” Well, they sure as hell are not getting my dog, so they got 5106 and the number I am not supposed to divulge until I’m dead and a Norwegian immigrant needs it. FedEx: (new person): What type model of vehicle is the gearbox going on? We will need an HS7 Form completed.”

Now Form HS7 is one page with font the size of the cellular organelles I used to look at with an electron microscope. And it’s in perfect bureaucratic-ese. Included is a box for the VIN. The race car don’t have no frickin’ VIN! So, I calmly (?) explain this and check all boxes that apply. ME: “Please find attached Form HS7.” To which I get the automated message “I will be out of the office …”

Aug. 30- FedEx: “Only one box can be selected on the form.” Well, by god, why didn’t the damn form say that in the first place.”

Now as it turns out Rob Keller was coming up to my place to pick up a car. First thing he asked was if I had gotten my tranny. That set into motion an animated response. Rob: “Check Box 2A.”

Off to the computer and scanner and in a few minutes I had Box 2A checked. MAYBE, I will get my precious Swedish Sellholm M47000 either before my current one breaks, or I die, whichever comes first.

I should know better… 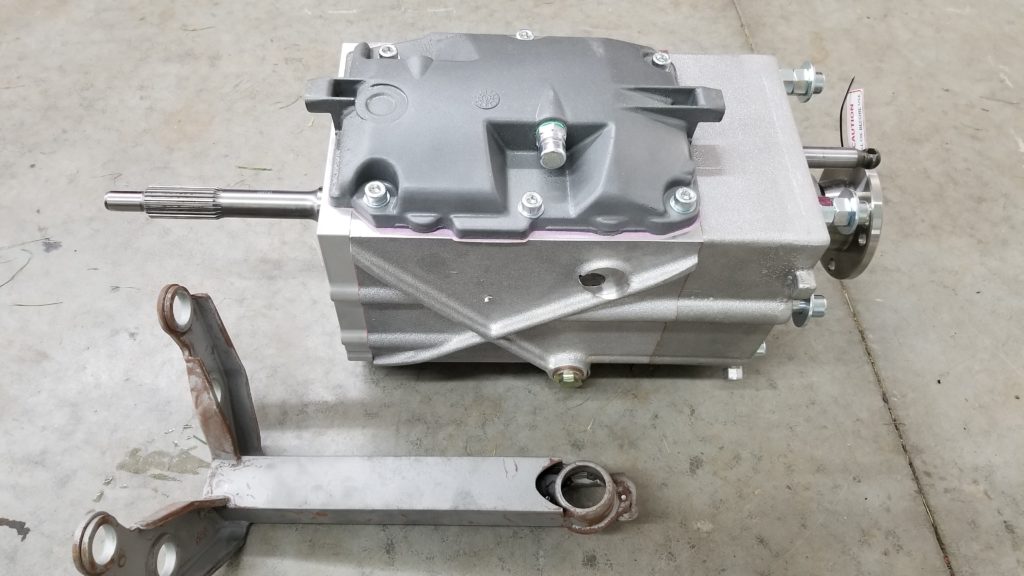 Autobahn was pretty tame by contrast to dealing with FedEx. This was a one-day event, so to make the most of it we signed up for both Vintage and F Production. That would give us a total of six track sessions in one day. And of course, it was as hot and humid as all get out. But it ended up great! We really should have been in D production but that would have been back-to-back with Vintage.

“Autobahn was conceived and designed to be a member’s club, following the traditional structure of a golf club,” said Mark Basso, who is club president. “It is designed for families, racers, nonracers, car enthusiasts, and motorcycle riders, et cetera.”

The track is divided into two circuits. We ran the longer, 2.1 mile, 15 turn south circuit, while the country club members had the north portion. Oh, if you wish to become a member, you’ll need to pony up $40,000 for the initiation fee and another $5K annually. Darn, too bad I don’t live a little closer. Not. 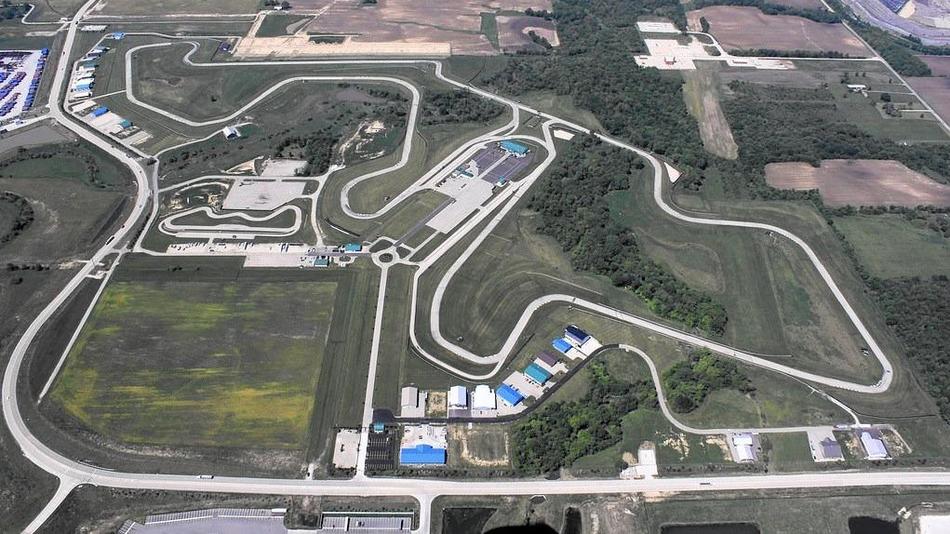 Here’ my in-car video and commentary from the Vintage Feature Race. 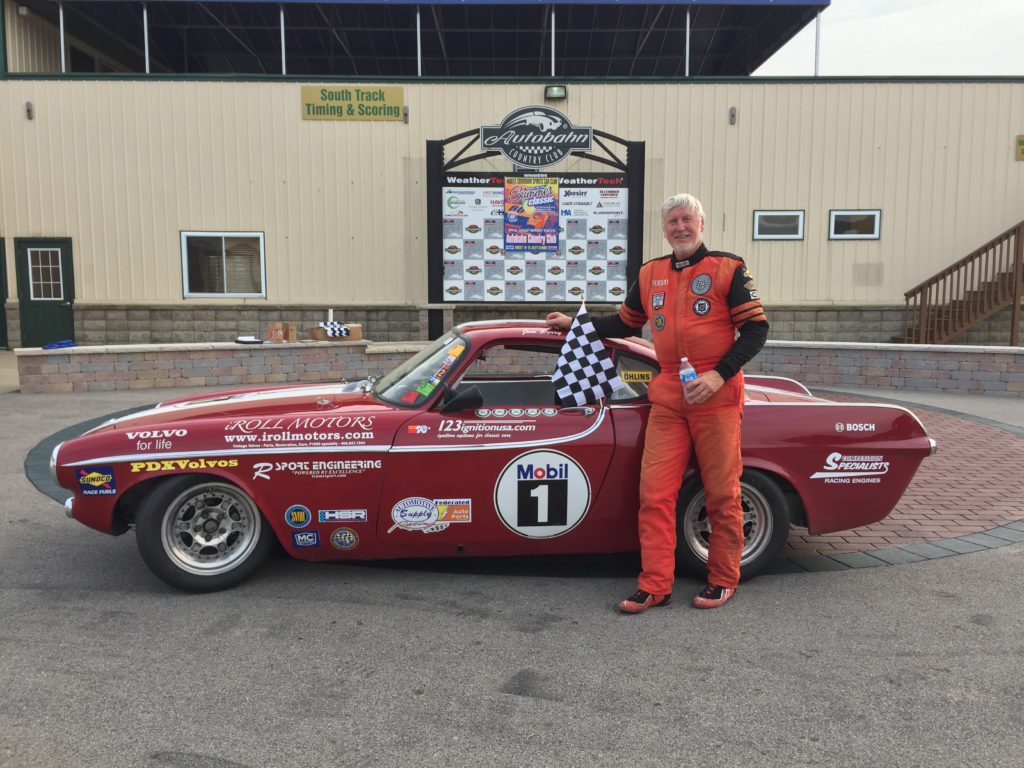 Always nice to be directed to the podium at the end of a race!

Now, as I post this I am final preparation for the Big One – VSCDA’s Elkhart Lake Vintage Festival at Road America!