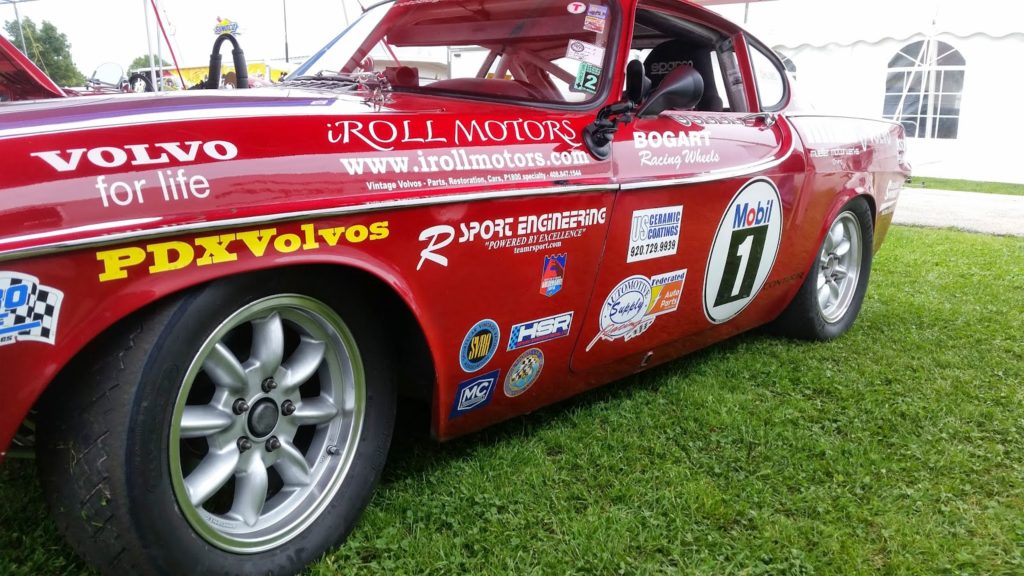 Last you heard from me we had come off a 32 day West Coast road trip in which the car was my least favorite thing. I never posted about the Portland Historics because I was too darn busy trying to track down the source of the intermittent miss and finishing the 3-year screened room project at home. I did better with the latter than the former.

The following short clip from the Portland Historics in July tells both visually and audibly what was so frustrating for us. It features Californian 544 Volvo racer Alan Berry.

Regardless of car performance we had a great time with Alan and another new friend, Gil Stuart from British Columbia, who races a 444 Volvo, a car I might add, that is also street legal!  And then there were all the other Left Coast friends, especially the PDXVolvos group. We also got to jump out of a plane from 13,000 feet and tell about it! 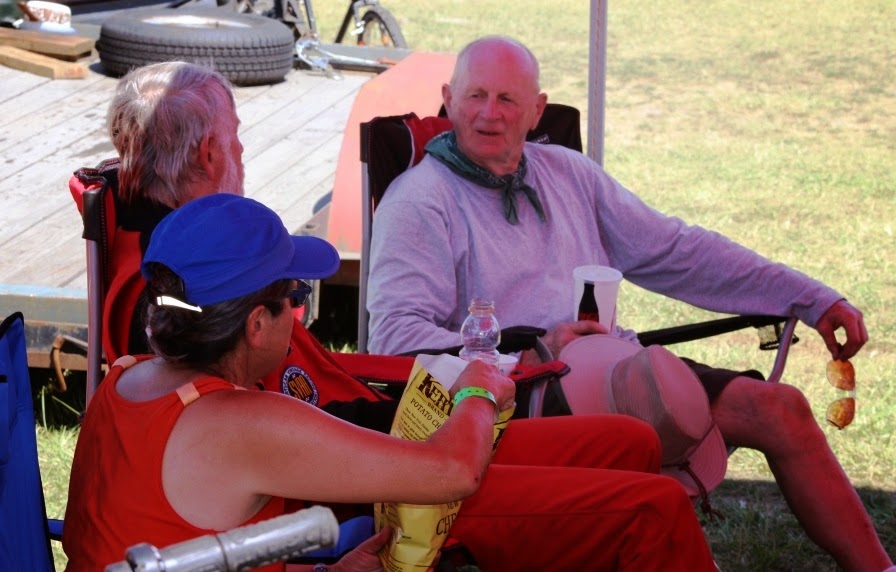 This is Gil Stuart with us in Portland (David Farrington photo) 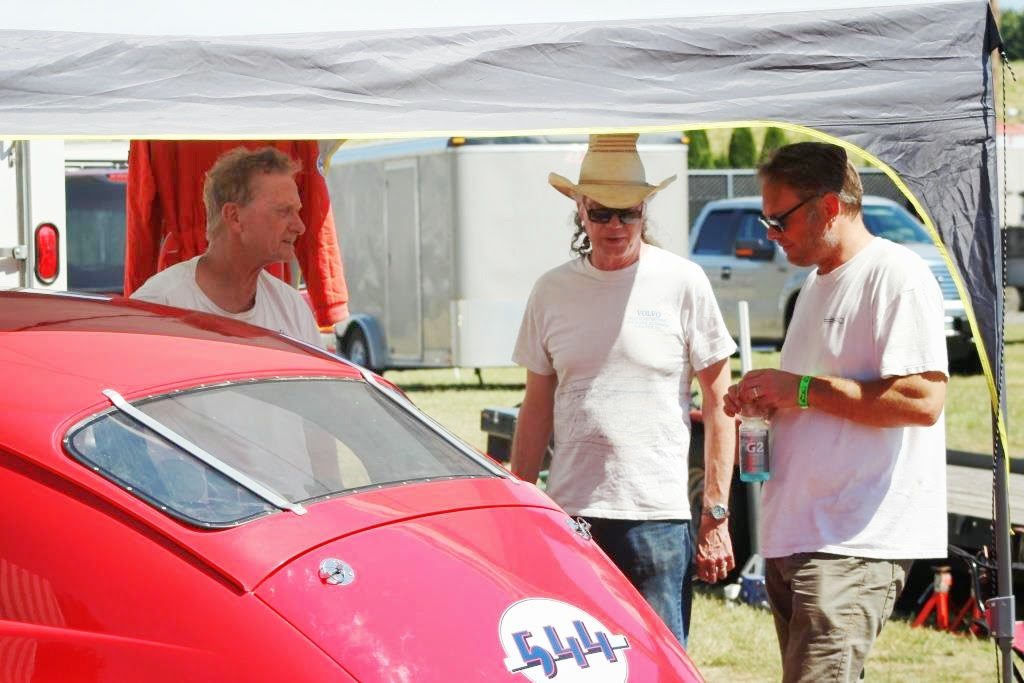 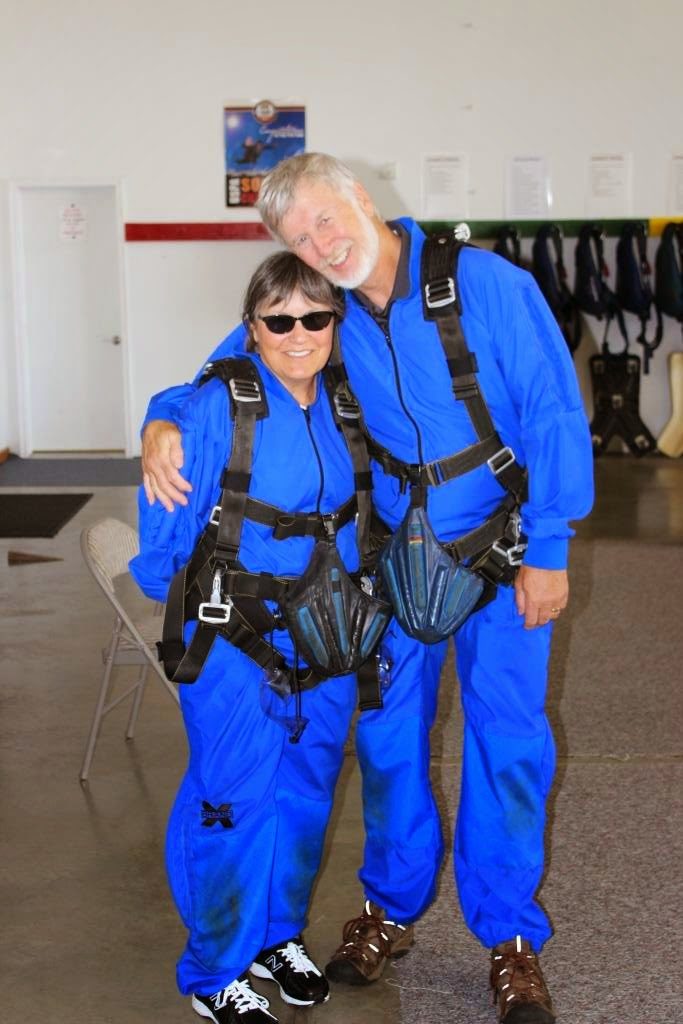 We thought we had the solution to “The Miss” when we found cracks in the epoxy filler than covers the distributor rotor resistor. Replaced the rotor, took the car to a local private airport and it ran perfectly. Put in the trailer and did nothing more. Pulled it out of the trailer on Friday morning and the damn miss was back. So the saga continues, still unanswered but this motor seems to have an accommodating personality because the miss will disappear if we let it warm up before heading out. So run wise, our weekend was great.

Do you want to be an arm-chair diagnostician? See the very bottom of this post where I chronicle what has been tried and what has failed to identify the source of “The Miss.” Warning: It has befuddled the best of automotive minds. But maybe you have the solution!

We got a good practice run in Friday before the cold drizzle started and did not end. By 4 p.m. it was time to find someplace warm and dry. So we headed for Siebkins, Elkhart Lake’s iconic racing watering hole. I love this place. If you have not read The Last Open Road you should, because Siebkins is prominent in this fictionalized history of the early road racing days. 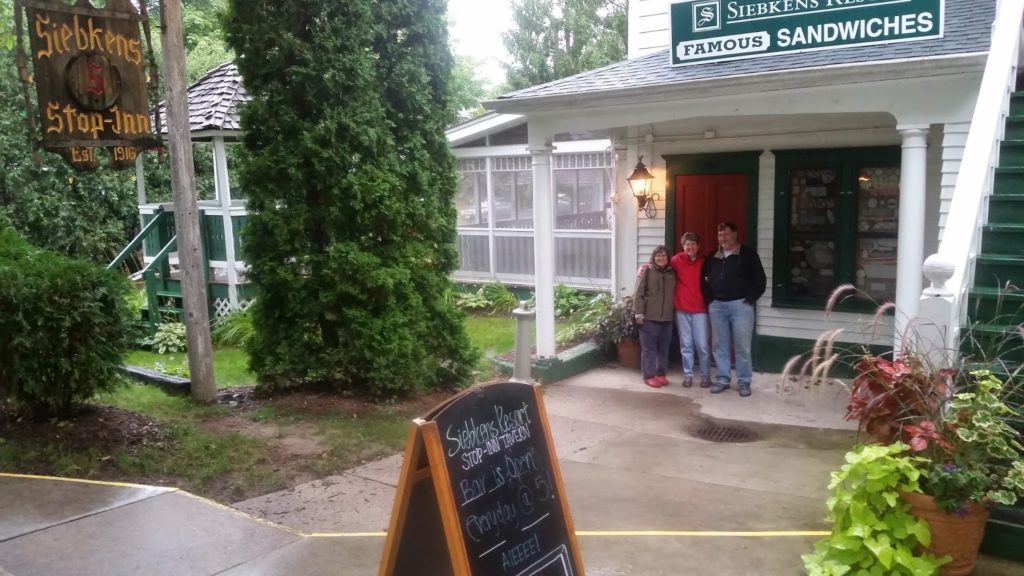 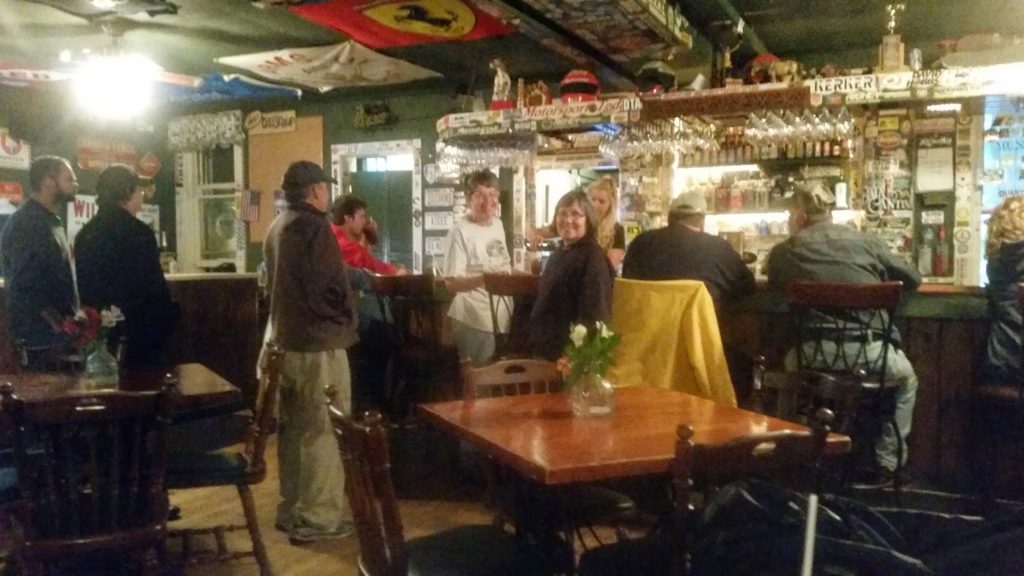 No place in North America is more iconic for sports car fans than Siebkins, and the thousands of racing decals adorning the walls and ceilings proves that.

The weather was so miserable the P and B Motorsports team of the Perrys and Farringtons headed back home for the evening. Sleeping in a warm, dry bed was just too appealing. So we got up early and headed back in the cold to the track for Qualifying. 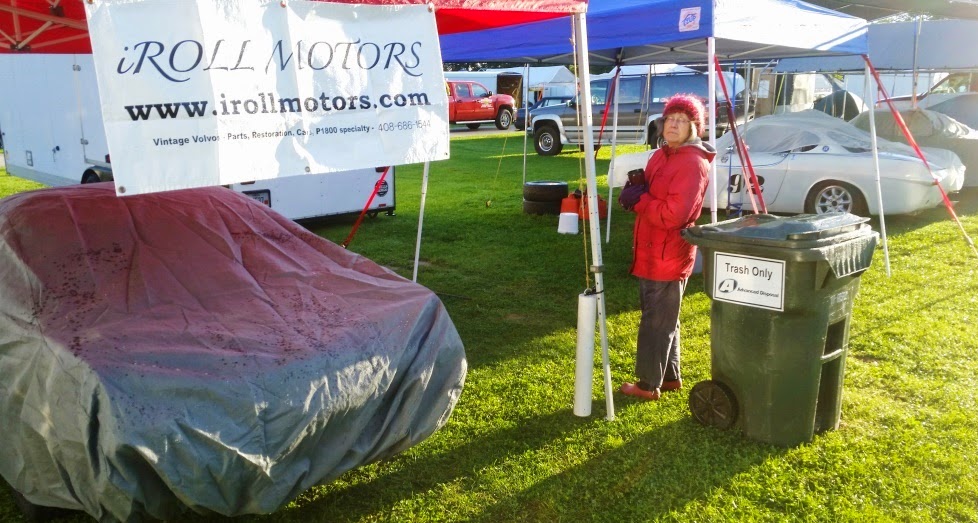 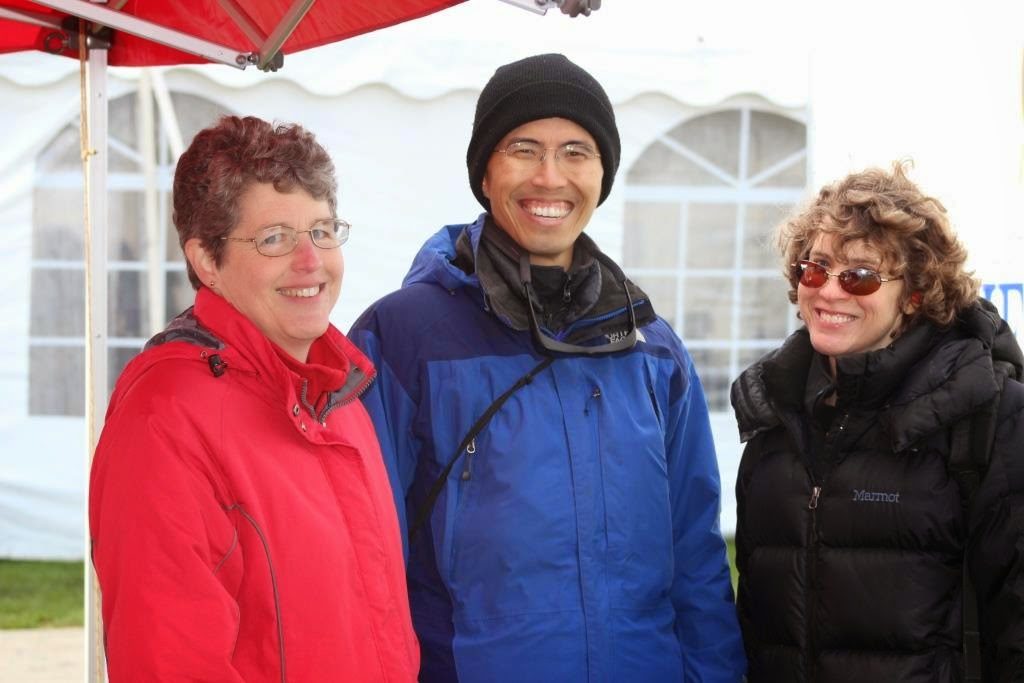 Sue Farrington, Peter Tan and Rachel Durfee seem to think it’s winter
We had a reasonable run, turning a decent but unspectacular. 2:55.539 on a cold but dry track.

I am still pondering what happened in Saturday’s race sessions, wondering if Friday’s miserable afternoon had some drivers a little overly keyed up, because, in a word, Saturday’s races were a mess. 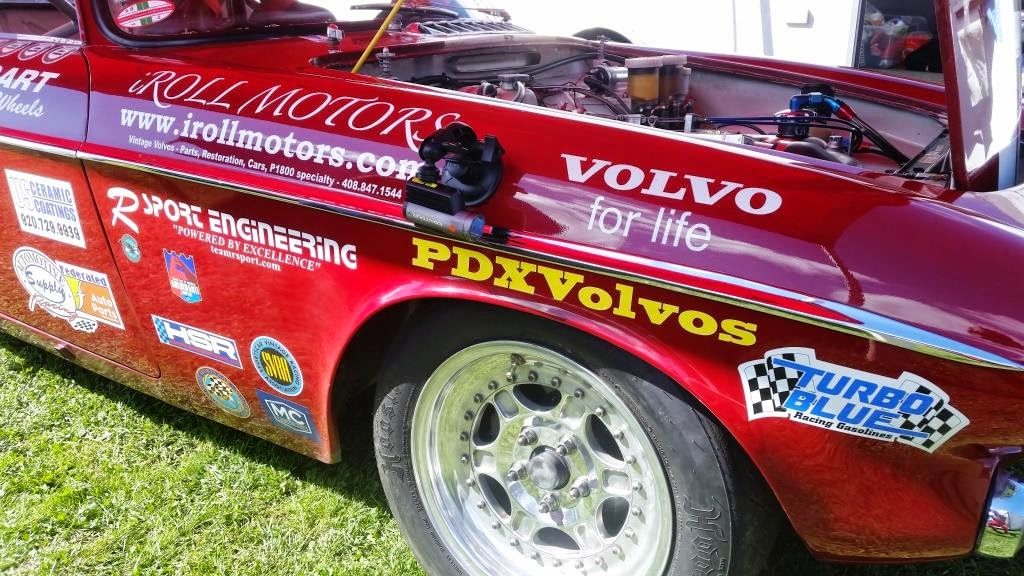 We added to our video capabilities with a Contour suction cup mount on the fender.

Our Group 2/3B Qualifying Sprint Race was cut short by a major shunt at the approach to Turn 5. It all started with a rather harmless spin by a very fast, race-leading Lotus driven by Rick Balsley. He was unable to restart the car and sat in the middle of the track at the 4 Marker for a long time. That’s a bad place to be because cars cresting the hill cannot see that part of the track. The waving yellow was out at Turn 4, and cars should have slowed and stopped racing, but it appears what shoulda and what dida were not the same. The Number 34 Porsche 356 hit the Lotus at near top speed just fore of the cockpit and the Lotus came apart in an explosion of fiberglass and metal. Balsley was beyond lucky to come out of this with only bruised ribs. Another meter back toward the cockpit and he may have been killed.

Here’s the video from that race, ending with the incident. And if you want to see it from another car or what my driving looks like, take a gander at Tony Drews’ fine video at http://youtu.be/I6YHtqFVd-o

That was just the worst of many incidents throughout the day. I agreed to be on VSCDA’s Driver’s Committee this year. We’re charged with sorting things out. This was initiation by fire. Editorializing here, we MUST have some changes and drivers have to pay more attention.

Saturday is always a special day for anyone who loves vintage sports cars. The “Gathering on the Green” of some cars that go beyond spectacular took place at Victorian Village this year. Despite the cool weather is was a wonderful assemblage. Unfortunately, the one Volvo that we all thought would represent us was a “Did Not Appear.” Thank you, Bob Prince, for your organization.

Gathering on the Green car field 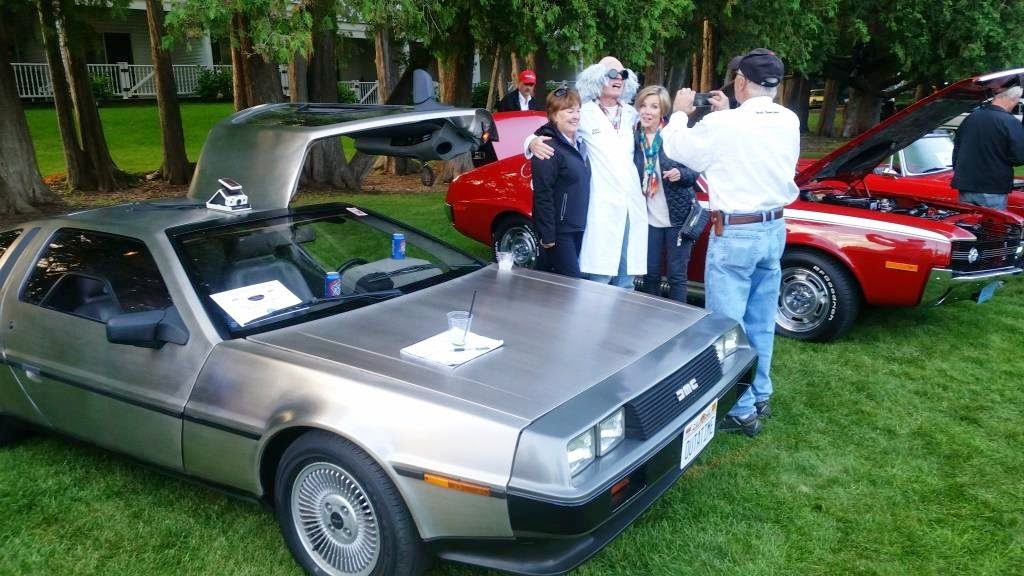 Even old car lovers have a sense of humor. ”Doc Brown” brought his Back to the Future DeLorean.


After the GOG, the members of the “Swedish Pavilion” — 25 strong — gathered at Lake Street Café for Saturday dinner. Great food, great service, great conversation with lots of laughter. This could become an annual event! 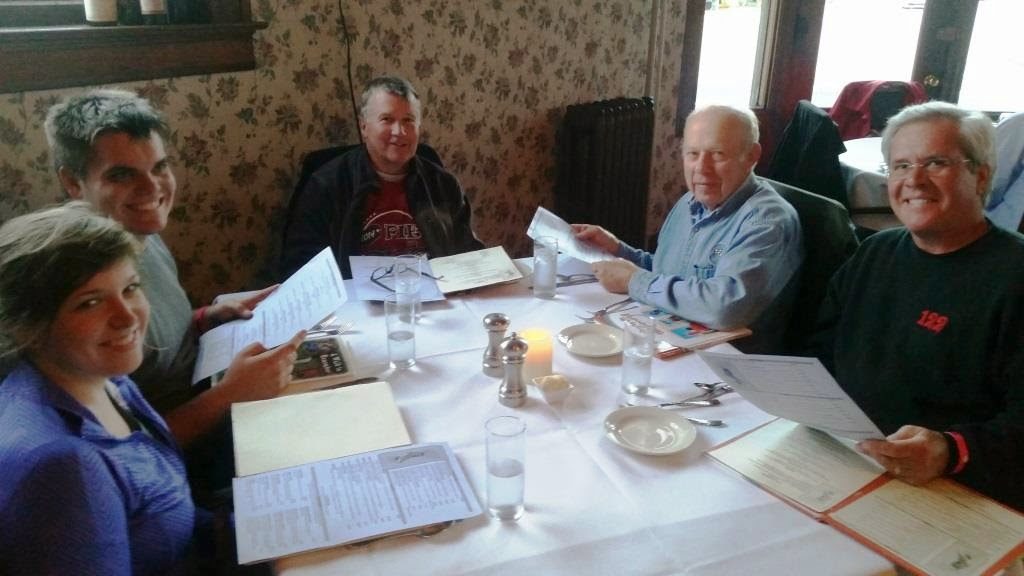 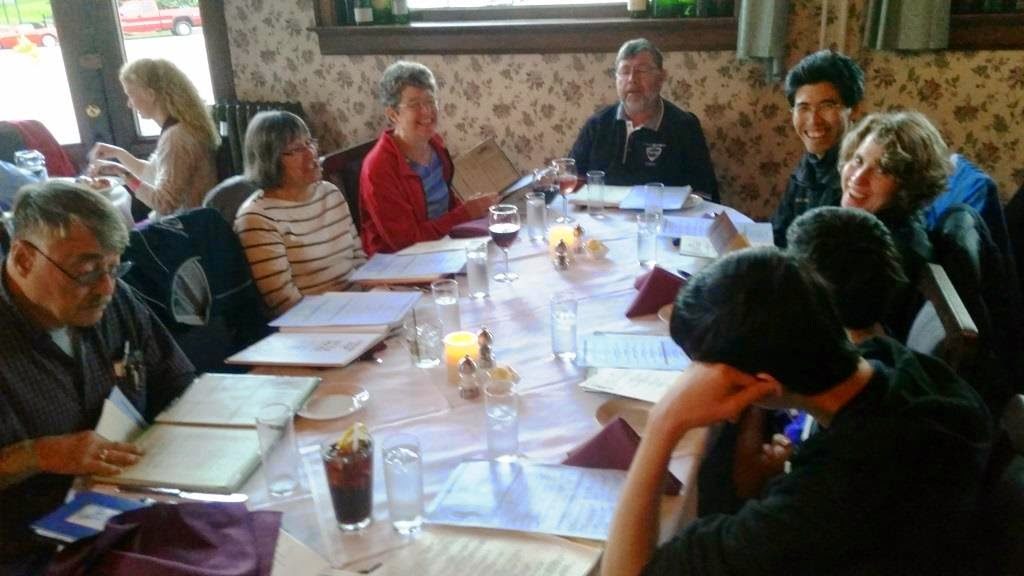 Sunday proved to be a much better day all the way around! And we had some great racing. 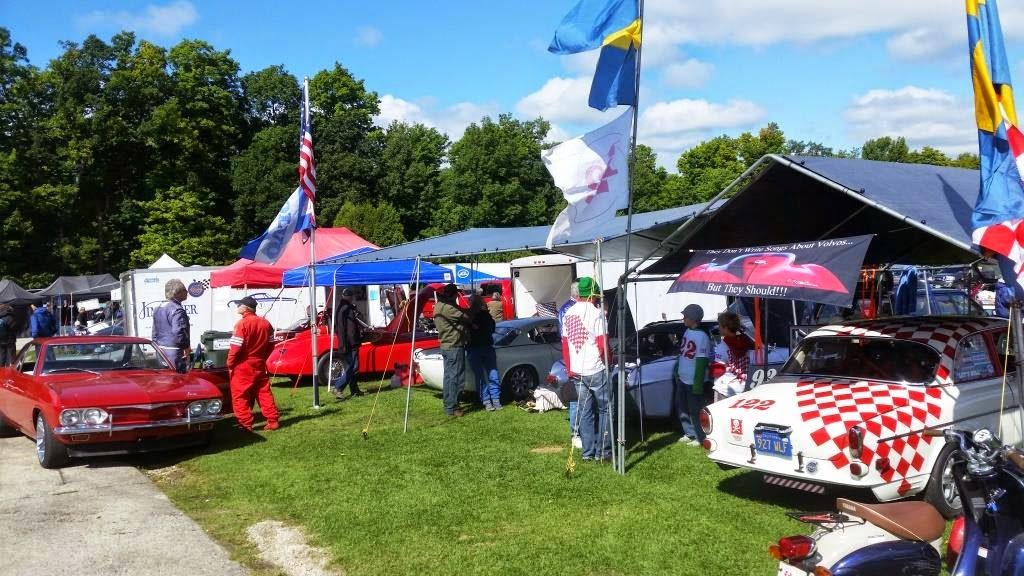 Now this is more like it! Sunday in the Swedish Pavilion 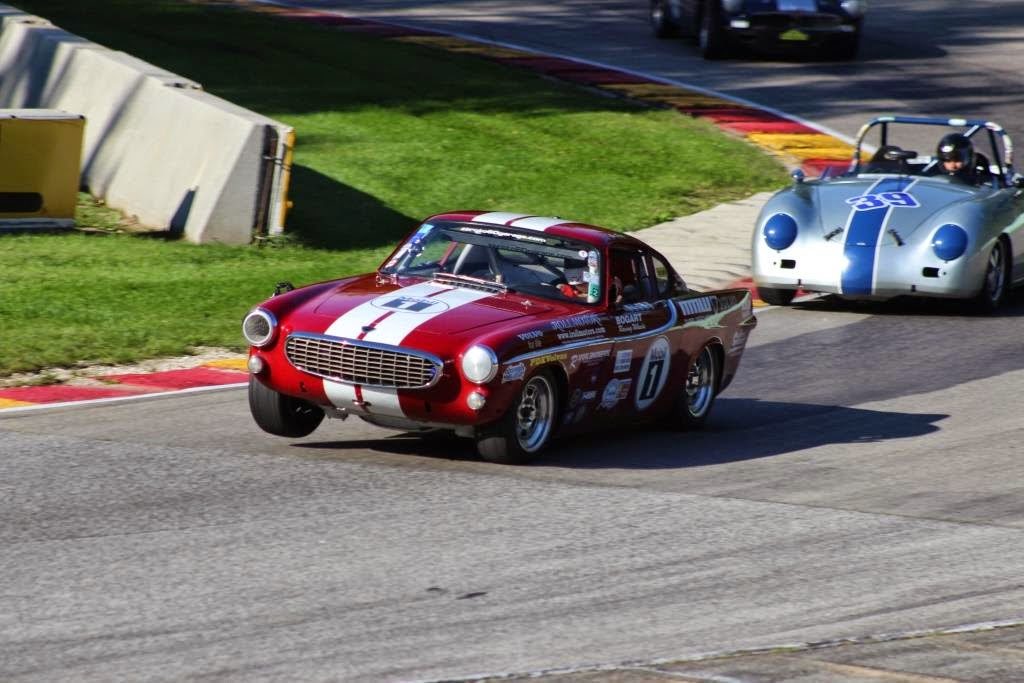 Catchin’ air. If I have to get up on three wheels to stay in front of a pesky Porsche 356, I will. (David Farrington photo) 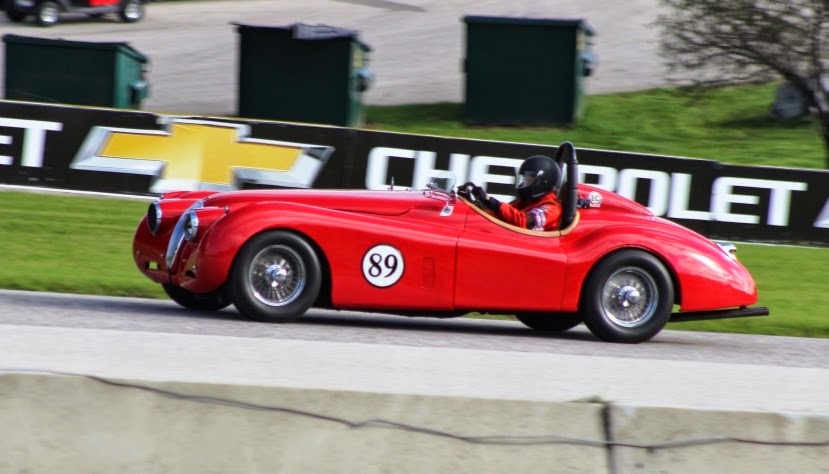 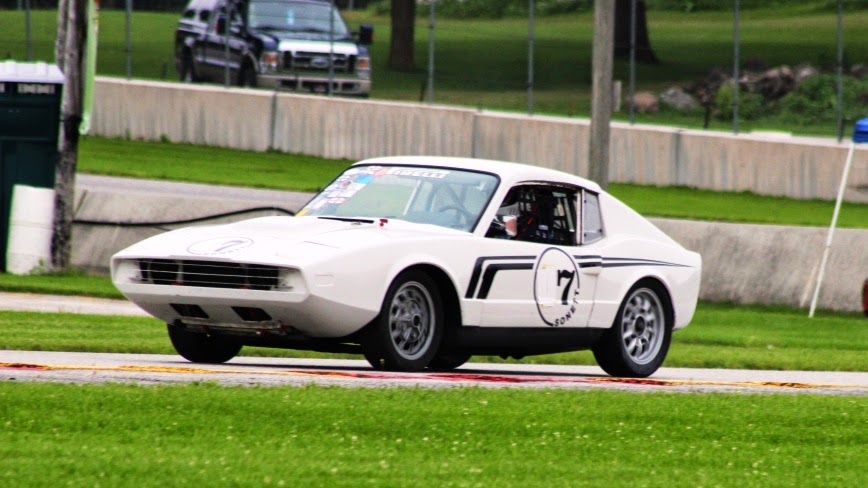 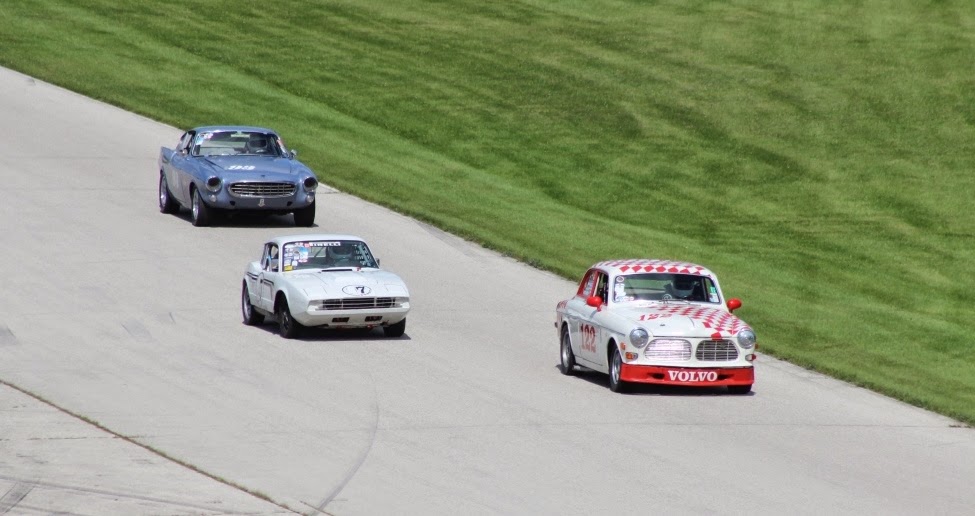 Here’s some video of the Group Race.

ELVF has several “Cup Races” commemorating the earlier days of sports cars racing. Cars are gridded by expected laps times. We fall into the Sheldon Cup, for cars that normally turn laps between 2:45 and 3 minutes. All of the other Volvos were in the Kimberly Cup with times over 3:00.

Given the 1st place finish earlier in the day, I was pretty satisfied at this point of the weekend and told Joy to not expect any record laps. Gridded in the 29th position I finished 7th overall and first in class with a best lap time of 2:50.874. There was some really good racing in that session.

Check out the video of the Sheldon Cup here. (The speedometer and tachometer are accurate. Disregard the recalcitrant Lap Counter/Timer.)

In the Kimberly Cup the Volvos were 1-2-3, Ray Friewald’s ‘61 1800 finishing seconds ahead of Alex Christopher’s ‘64 1800 finishing seconds ahead of Todd Jongen’s ‘67 142. This was Ray’s second year of being atop the podium for the Cup. (A special note: There were two cars that finished in front of Ray, but they were way too fast and should not have been in the Kimberley Cup, and as a consequence were disqualified.) 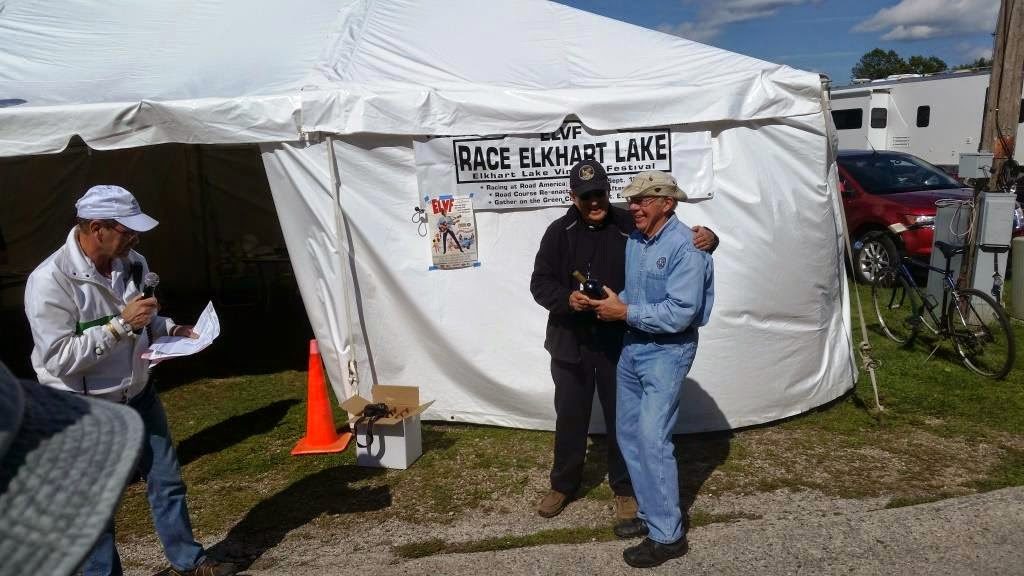 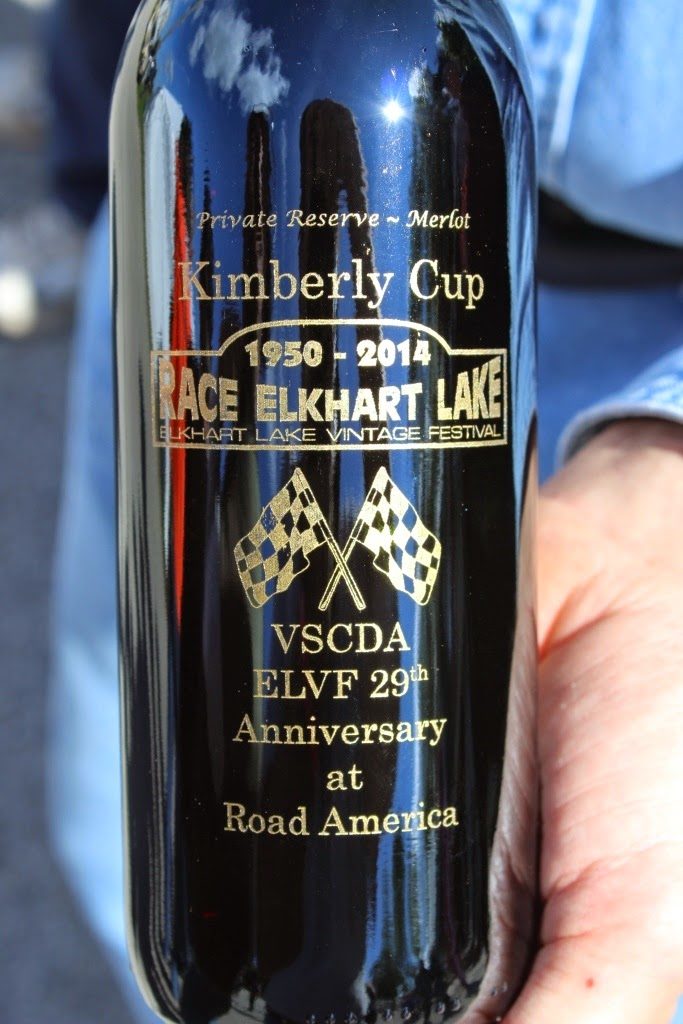 This looks to be the end of our 2014 racing season. So let me end by recognizing in print the people and organizations that helped us this year.

And then there are the people who are there getting me in and out of the car, torquing the wheels, keeping track of all the aspects of car setup and performance, working on the daily issues, doing video and data downloads, and sometimes changing axles or transmission on the asphalt or grass. Thanks, Joy and David and Dave!

When the engine is missing, the LED light on the Crane box is unsteady. When it is not missing it’s completely steady with no hint of flash.

A chronology of attempts at solving “The Miss.”