Hot. Humid. Heavy weather. Just what you’d expect in July at Road America for the WeatherTech International Challenge with Brian Redman. We went through 60# of ice over the weekend. But 1 Red ran flawlessly, albeit a little warmer than normal –at speed, water temp was 220 and oil 240.  Given the heat we were a bit surprised to see our lap times come within 0.015 seconds of our all-time best and GPS data showing a new top speed. 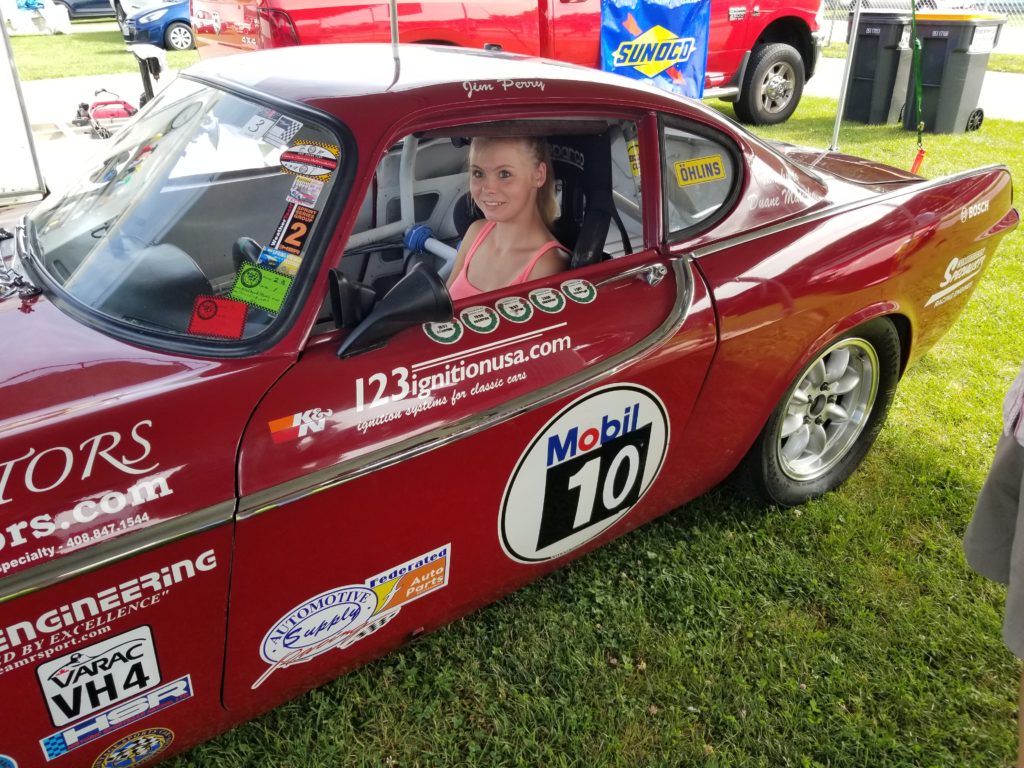 Elizabeth came with her dad from Milwaukee and tried out the driving position. (The number change was a result of my being a bit late to register.) (David Farrington photo)

This event attracts people from all over the nation. It is one huge weekend party with racing sandwiched between. The off-track festivities center around two car shows that fill the streets of Elkhart Lake. We joined the 154 race-car field for the drive downtown Friday night. Here’s a quick 50 second look …

If you wish to see Nate’s video of the entire parade, you can find it at https://youtu.be/8RZj0jjx6k0.

I was astounded to see people lining Highway 67 beginning 2 miles outside of town. The crowd was 4 deep as we wound around downtown. For two sunny, hellaciously hot hours we hosted on-lookers outside Siebkins Resort.

After getting some good laps in on Friday our Qualifying Race was scheduled for 1 p.m. on Saturday. At 12:30 the storms rolled in and we were warned to seek shelter.

At  Friday Driver’s Meeting the Chief Steward told us that Sunday’s Feature Race grid would be based upon our finishing position of the Qualifying Race. We huddled in the trailer as the rain pelted the track. Next thing we knew we heard “Final Call to Grid for Group 2” as the heavy rain continued.  If there was a first call we sure as hell did not hear it! We scurried in a major way to get to the grid. The car went up, Joy and David Farrington threw on the rain tires, David laid in the water to disconnect the rear sway bar trailing arm and I softened the shocks. There was no time to think.

A significant problem with racing in the rain is fogging of the windshield. No defroster in a race car. Years ago we had bought a Harbor Freight defroster that just does close to nothing and have gone in favor of a long-handled squeegee, but given the rush that failed to get into the cockpit. This clip gives you and idea …

It was slightly irritating that Road America decided to abandon the stated Sunday gridding provision in favor of best lap time of the previous qualifying sessions.

Group 2 had a wide range of cars in it, including some V8s and former professional driver Doc Bundy, who started on the pole. We did pretty well – moved up 7 positions to finish second in class to a Devin-Porsche. The race was cut short due to an incident in Canada Corner that you’ll see on the video. Here’s the edited in-car video of the feature race.

Photo gallery at the end of this narrative.

So next up for us will be the Elkhart Lake Vintage Festival, which will prove to be an “interesting” event. There are over 500 cars registered, with more than 200 Formula Fords. One of the criticisms of the WeatherTech International Challenge is that there is not a lot of track time, and to a large extent that criticism is accurate. The sessions are short. It’s also the first time I have ever run a session at 7:30 a.m.

Between now and then I need to decide on which motor to run. I have a brand new (as new as a 1970s B20 can get) motor on the stand but given the way the one in the car in running, maybe it’s best to stick with that one. 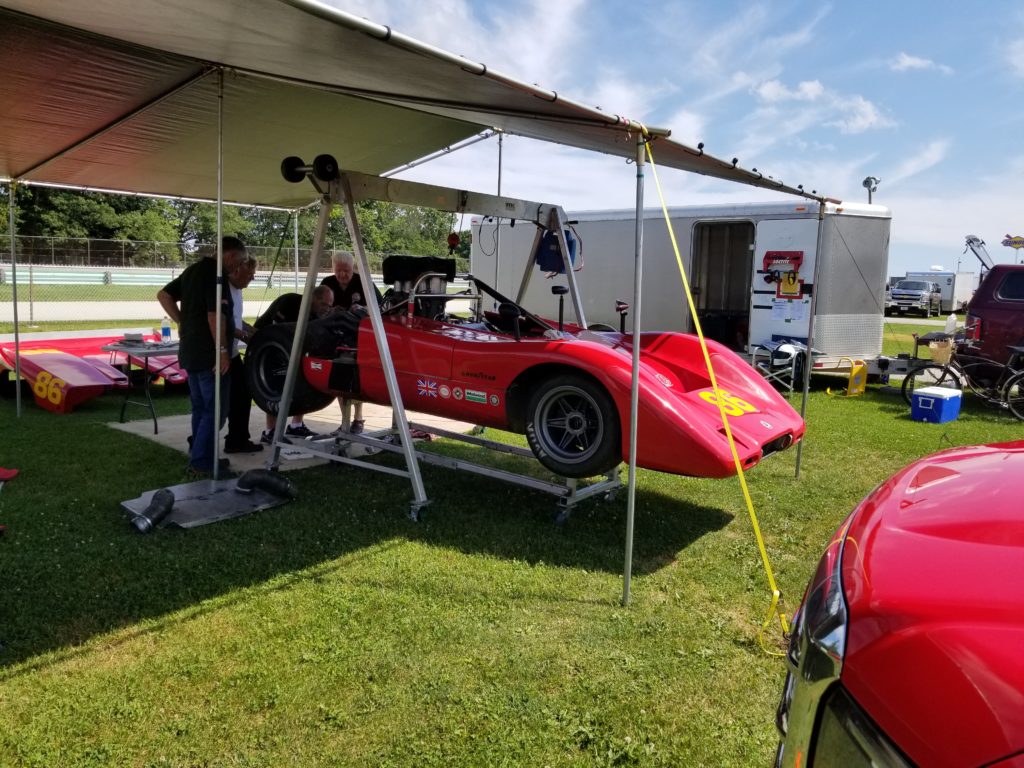 Ian Wood, a fellow Volvophile from British Columbia, left his Volvo home in favor of his McLaren. But he ran into a few issues. (Like his lift!) 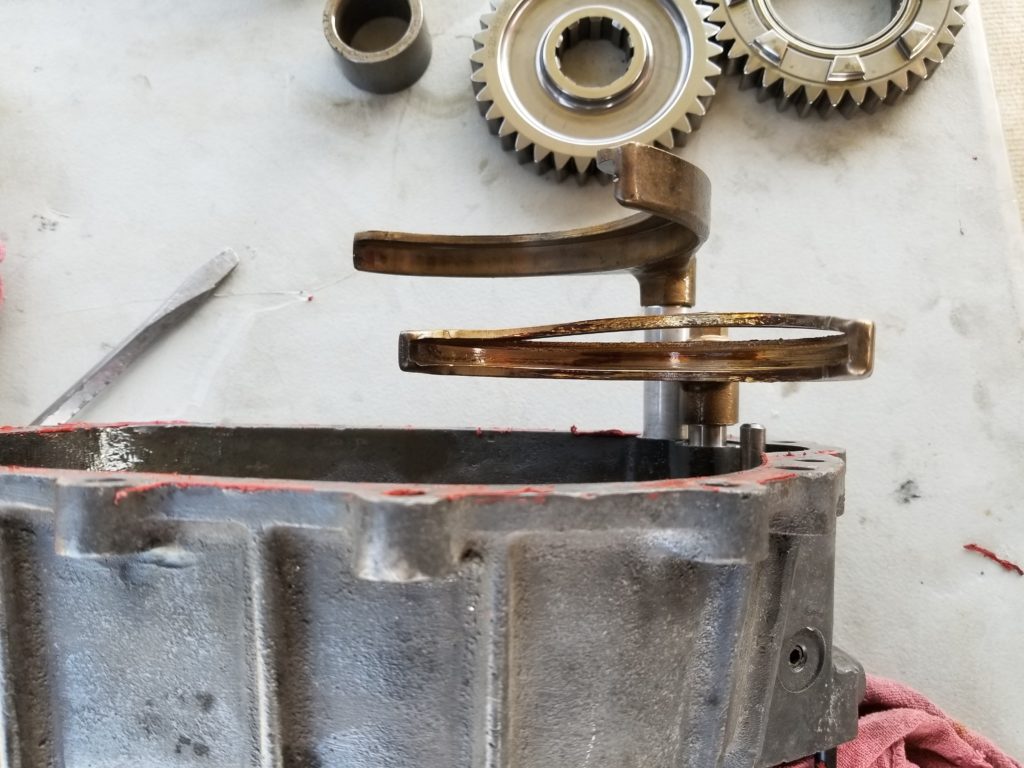 This shift fork sent Ian on a quest for a replacement. Fortunately he and his team were able to come up with a fix. 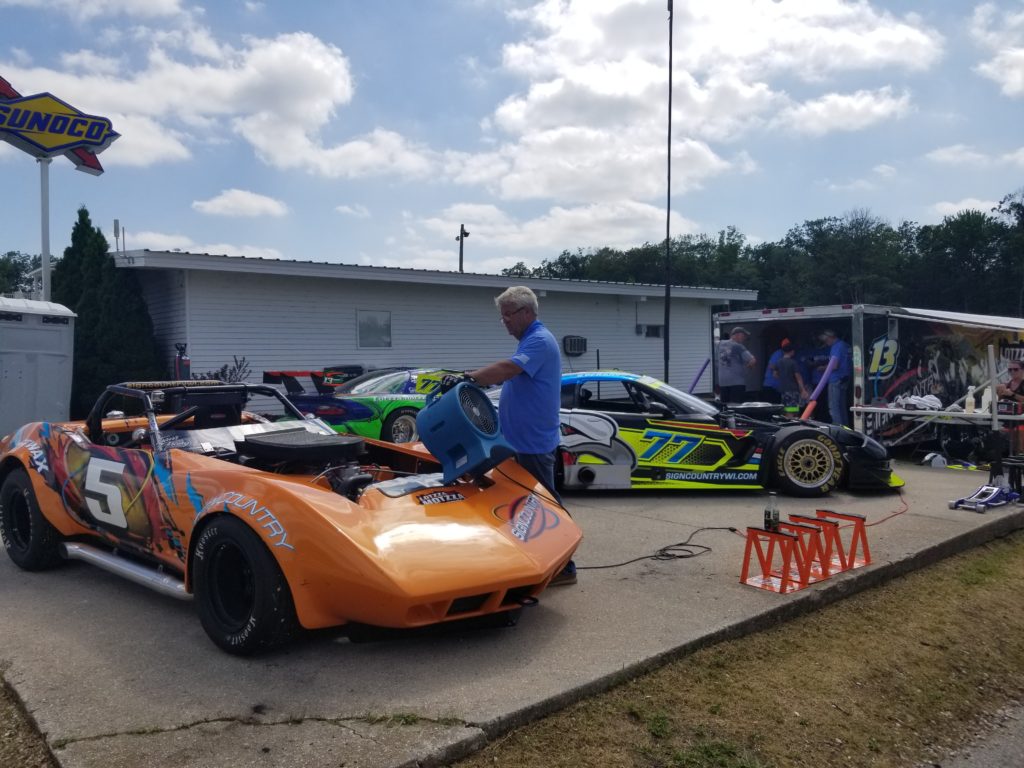 Does this tell you it was … HOT? 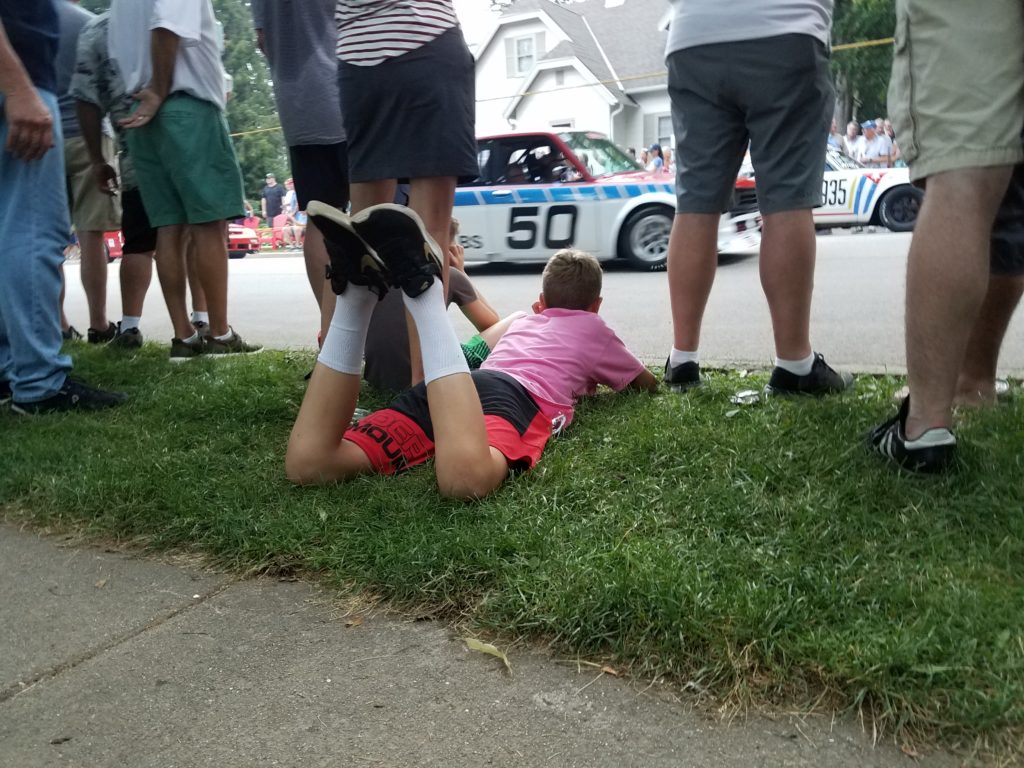 Young people have the capability of finding the best viewing position for the race car parade. (David Farrington photo)

The “$90 sticker.” Some people register their cars just to be part of the parade, and don’t race them.

Race Coordinator Joy Perry showed the colors and spent the evening showing the car and inviting people to get into it.

The Paddock Shop was a popular place because of its AC. (Oh, and the personalities — Brian Redman, David Hobbs and Burt Levy were there too.)

This event attracts a bunch of vendors where one can spend more money.

And the performance car people come out too. 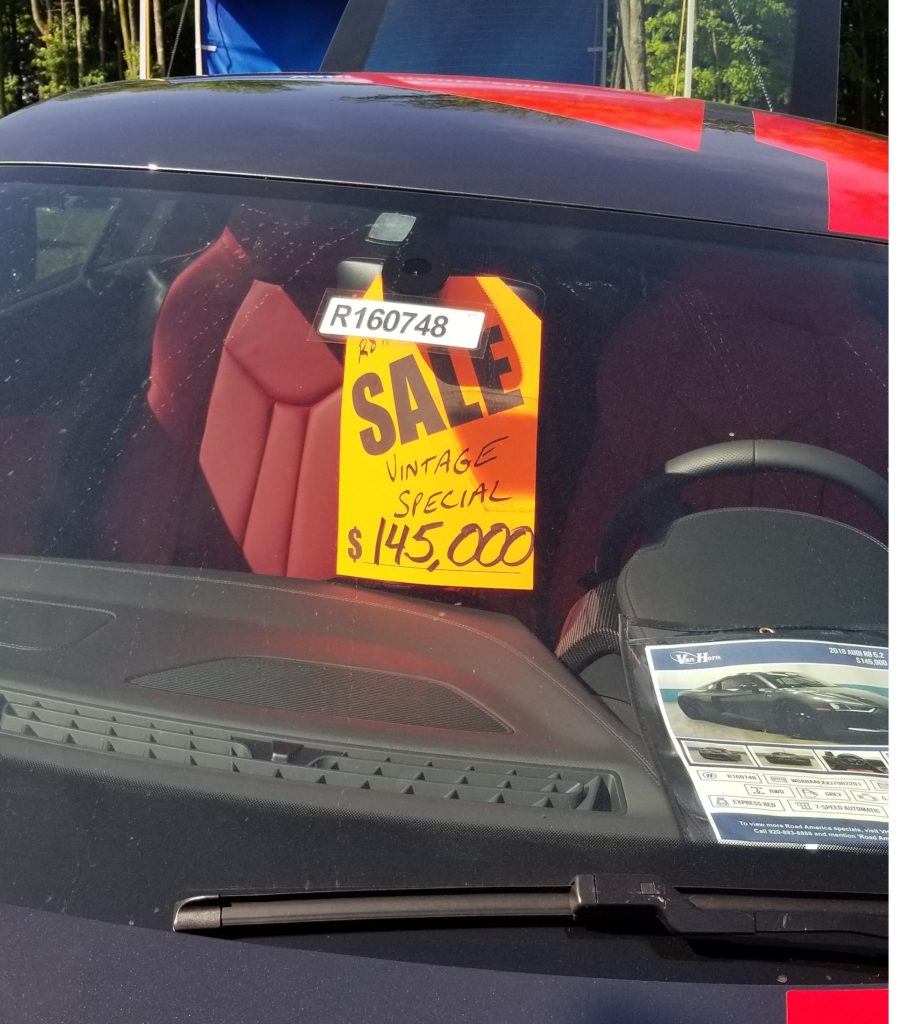 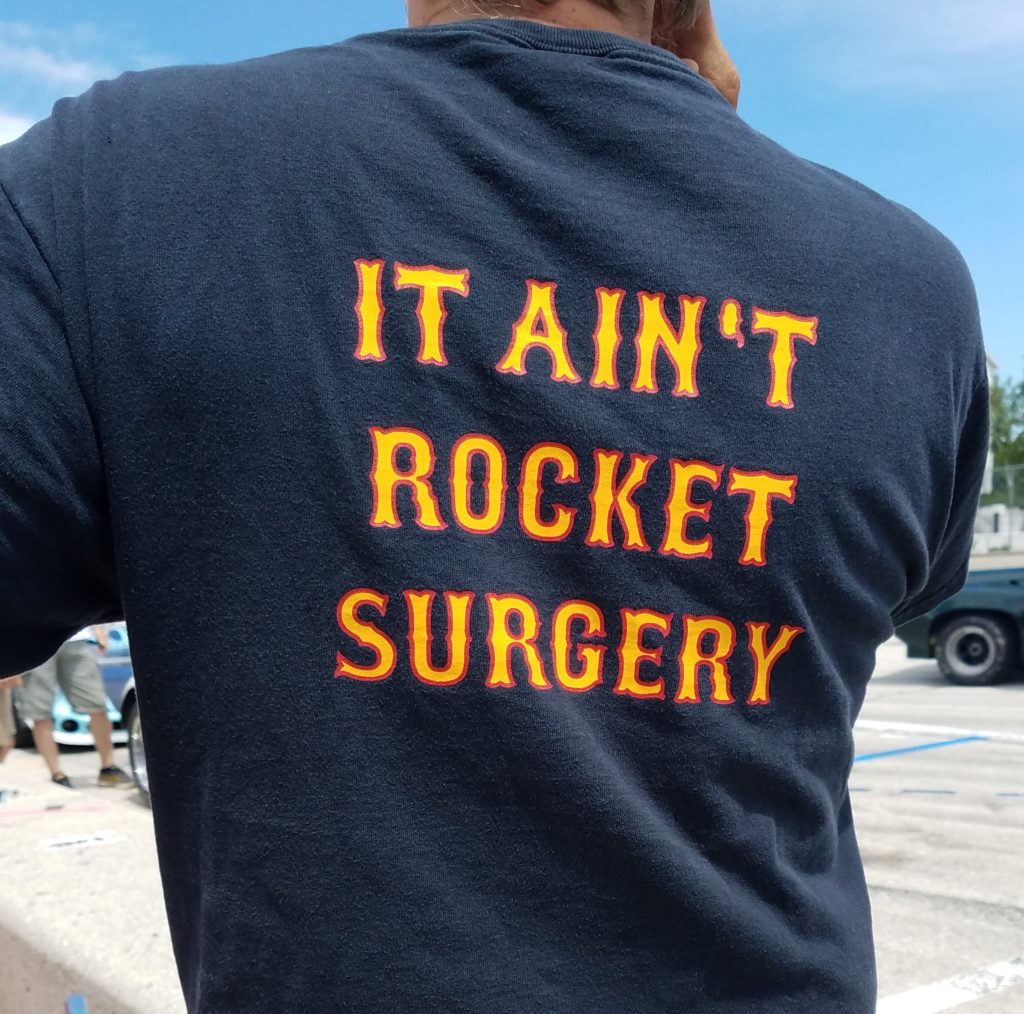