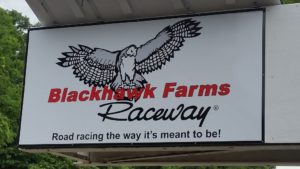 The Father’s Day Weekend running of the 25th annual Blackhawk Classic at Blackhawk Farms Raceway, South Beloit, IL, had big fields and lots of good action. It was also the location of the annual Kastner Cup, so the paddock and track were filled with Triumphs of all flavors, including some rarely seen.

Kas Kastner presents his field of Triumphs for their group photo

The Kastner Cup was made even more special to me because it meant rekindling friendship with Wausau High School Class of 1966 classmate Jeff Snook, now of Bowling Green, Ohio. Jeff campaigns a really well prepared TR3 that was constantly in my rear view mirror. 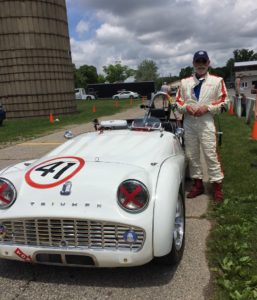 The Volvo Pavilion was fully populated – Jeff Babcock, Joe Brabender, Alex Christopher, Tim Detwiler, Ray Freiwald and Jim Perry. Slumming with us were Chuck Ryberg in his XK120 Jag and Larry Boyer with his Porsche. The P and B Motorsports team was scant – just Jim and Joy Perry taking care of the car duties.

On Friday we had the privilege of meeting for the first time in person Ed Madak of 123IgnitionUSA.com, one of our sponsors and supplier of our 123 distributors.  Ed, his wife and another couple were on an adventure to Seattle with their MGs. Life on the road as it used to be – little sports cars packed to the gills and with air conditioning with crank handles. 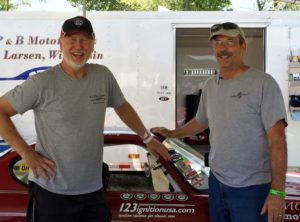 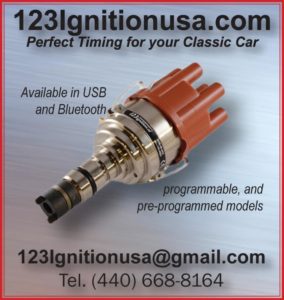 “P and B Motorsports uses 123 distributors” (said in advertising lingo)

Event Chairs Ron Soave and Jeff Porasik pulled off a spectacular event, and had an agreement with the weather gods too. In return for heavy nightly rain, the daylight racing hours were hot and mostly sunny with not a rain drop. Importantly, the event raised a record near $6600 for the Children’s Transportation Fund supported by the Tebala Shriners. 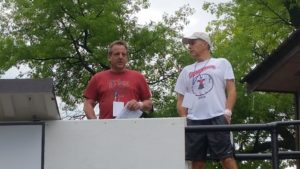 We had a spectacular racing weekend. 1 Red ran really well and we were able to set personal best lap times in two consecutive sessions on Saturday. My typical get-at-the-head-of-the-line for qualifying almost backfired on Friday because as I came screaming around Turn 7 of the 1.95 mile track I saw the last cars just leaving the grid! Despite getting a lot of passing experience we did well enough to put us on the outside front row for Sprint Race 1.

Here are the video highlights of that race. (Sorry about the typo you will see at the outset.)

In both that race and Sprint Race 2 Tony Drews (#95 Triumph TR 4) and I had some great racing going on, while Scott Fohrman sort of motored away in his MGB because he’s about 1.5 seconds faster.  So, in Sprint Race 1, I started 2nd and ended up 2nd. In SR 2 somehow another Triumph was gridded in the #2 spot. Tony was directly behind me and pulled one of his trademark starts by storming by on the inside and we all raced to Turn 1.  It didn’t take too long for me to get around him and proceed to some great back and forth. Again, a short video.

The Feature Race was pretty much a repeat.

The final race of the weekend was the Dad’s Day Scramble, a handicap race. Slower cars start first, with progressively faster cars being held at the starting line, waiting for the go sign while the driver stares at the climbing water temperature gauge. The countdown to go is high tech all the way — Ron Soave counting down from 10 with his fingers. (Just what you would expect from a rocket scientist.)

It was a given that Scott Fohrman would be behind us, but somehow Tony Drews had a faster lap somewhere along the way so I was third last to leave. One gets lots of passing experience. I put distance between me and Tony fairly easily, but Scott was closing in my mirrors on the last lap. I think I could have held him off anyway, but things went a bit south for him on the final turn and I crossed the finish line without a real challenge.

Now, you would think that would mean we won the race but apparently I lapped two of the slower cars only once, and so the results showed that I came in third. Or was it fourth – Race Monitor doesn’t know how to handle a handicap race and was all screwed up.

Nonetheless the Scramble showed that the fast laps in the previous races had not been anomalies, as I had several sub-1:26 laps.

And on Sunday I was standing in the trailer and all of a sudden a Volvo contingent showed up all smiles. I had no idea … 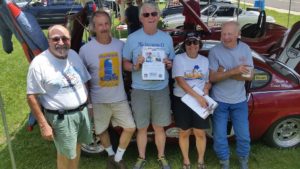 Alex Christopher, Joe Brabender, Brent Gustafson, Joy Perry and Ray Freiwald deliver the news that 1 Red has turned the fastest Blackhawk lap on record (as though records are being kept by anyone but them!)