Our 2015 season began at one RA (Road Atlanta) in April and was completed at the second RA (Road America) in September. Another successful season – no blown motors, no bent metal, no black flags. And overall a good season with consistent top three finishes in Class.

The finale was the Elkhart Lake Vintage Festival. Except for a little rain in the darkness of Friday night/Saturday morning (we can say that, we were in the trailer Friday night; the tent-dwelling Farringtons might beg to differ with the adjective “little”) it was a spectacular weekend.

The prep leading up to this race had promised to be as easy as I have ever had. Only needed to bleed the brakes. And of course I waited until Monday before the race to do it. Trouble was that I found I had no rear brakes when I got ‘done.’ Seems it was time to rebuild the rear master cylinder, and of course I had no spare AP Racing rebuild kit. That’s what overnight shipping is all about, right?

David and Sue Farrington flew into our “new” INTERNATIONAL Appleton airport Thursday night.(air freight directly from Thunder Bay to Appleton, just what I need).  It’s always great to have the effervescent, always positive Suzanne in our midst. 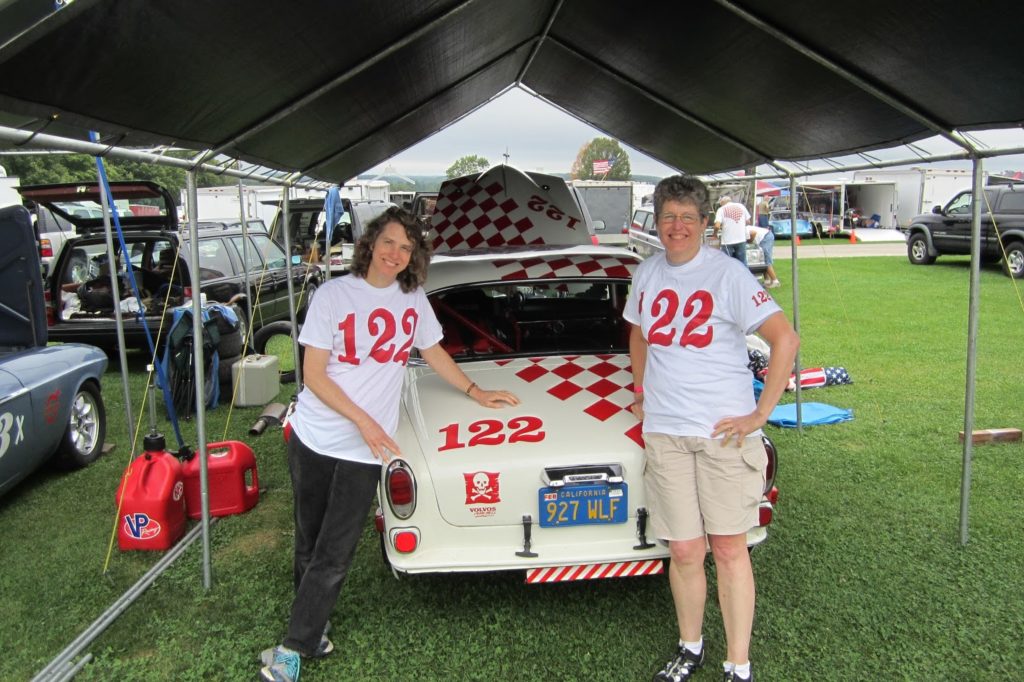 Sue’s sister Rachel Durfee came over from Madison. I think I need to send Rachel a P and B  Motorsports T shirt! (John Tuteur photo)

The featured marque this year was Jaguar, with a smattering of really nifty Allards along for the ride too. The Jaguar show outside Turn 5 was beyond impressive. So let’s take a look at the weekend in pictorial form. 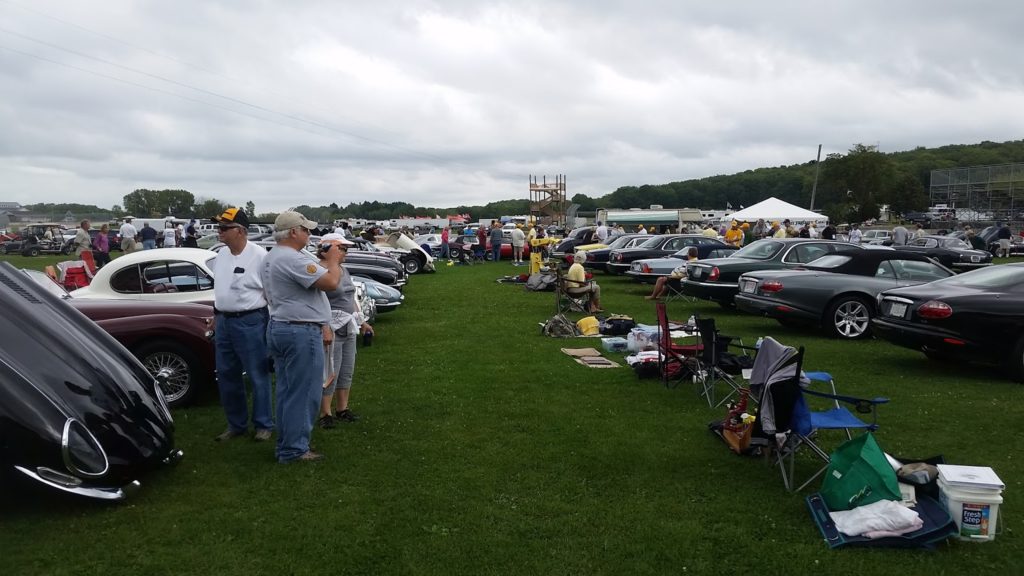 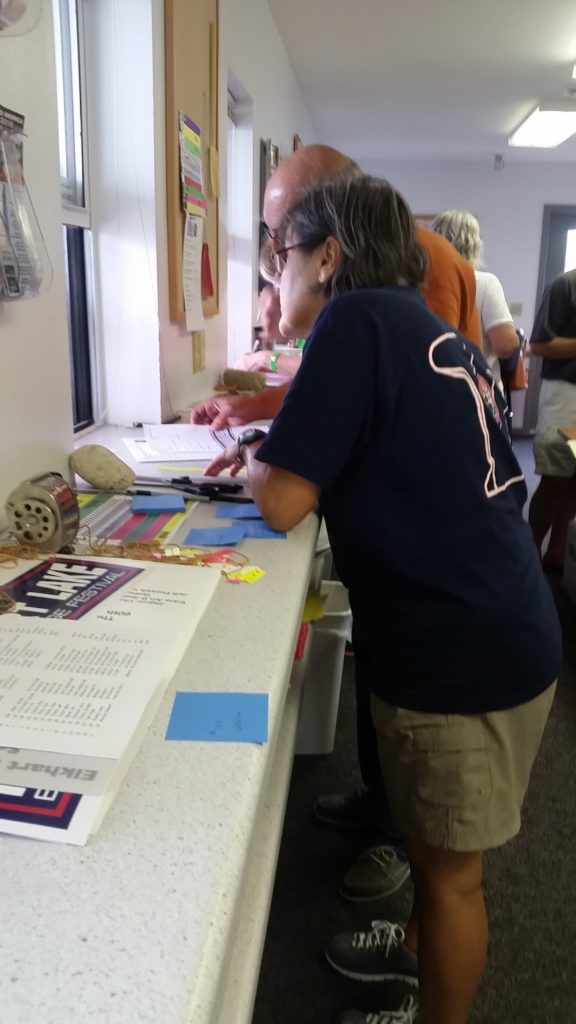 Joy and I helped out during registration. It’s a great opportunity to meet people and see all the problem-solving that goes on behind the scenes. Makes one appreciate what our single VSCDA staff member, Laura Hire, has to deal with. 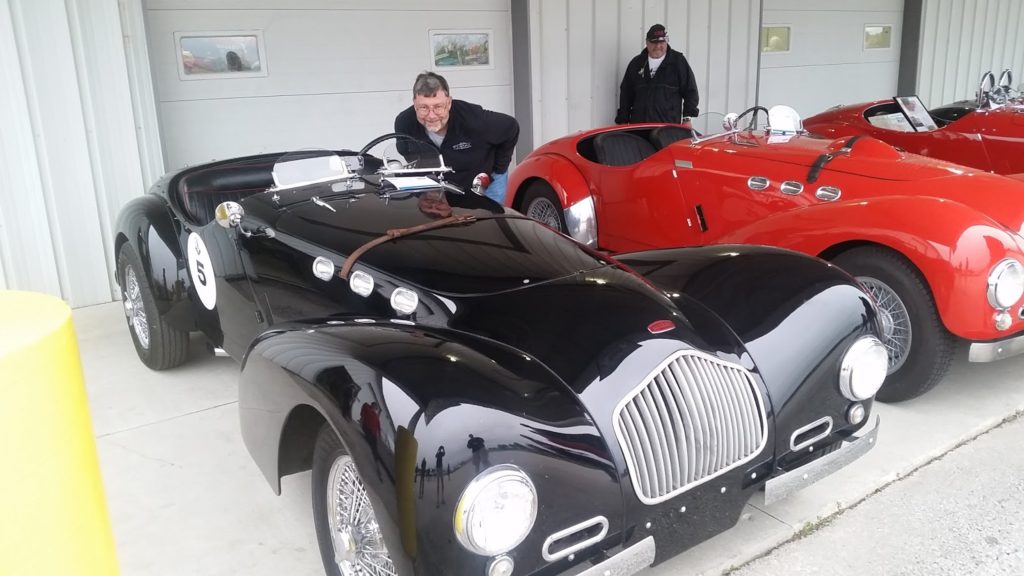 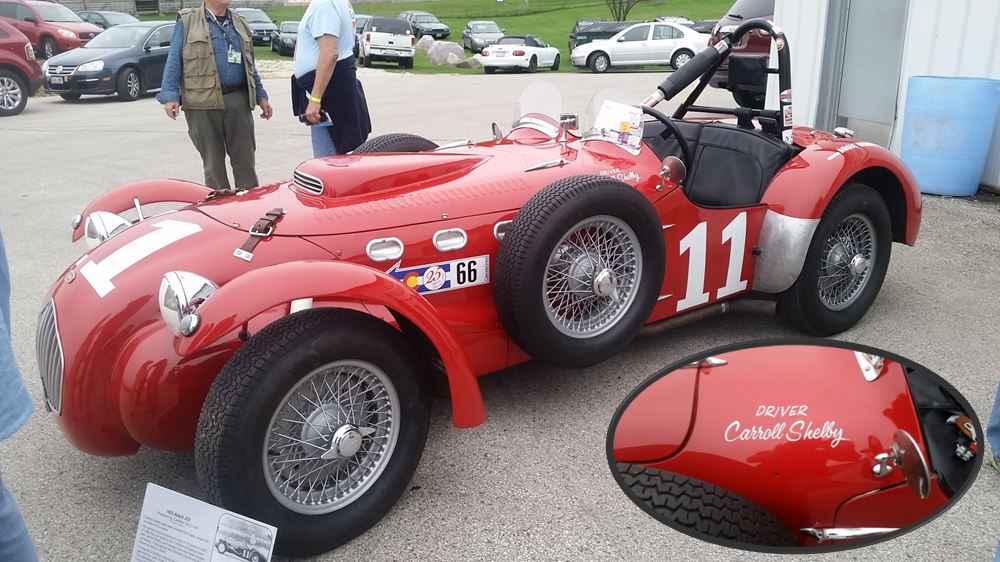 Maybe they all have history, but this one seems to have a bit more than others 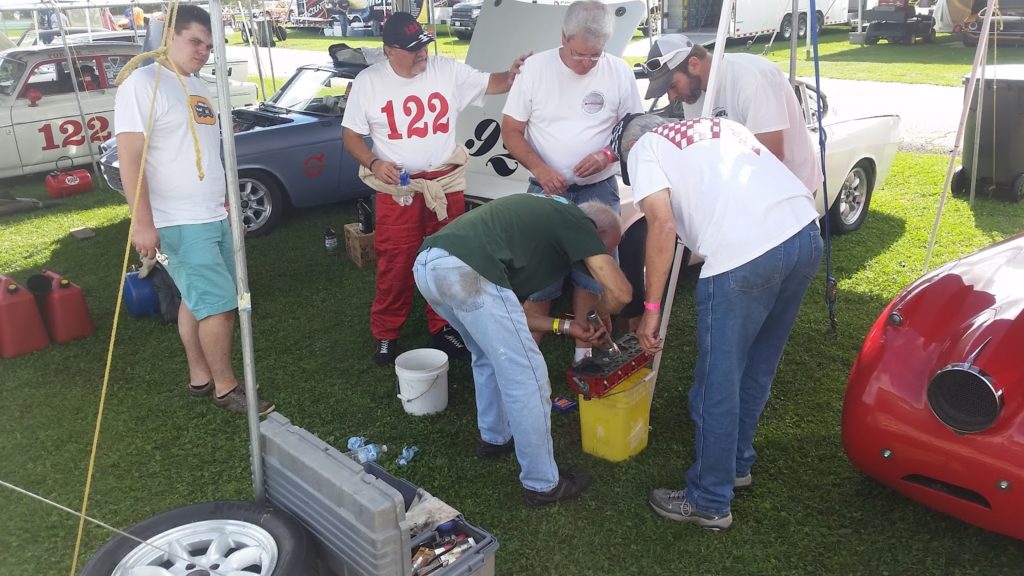 Alex Christopher had plenty of help (?) dealing with a cracked head 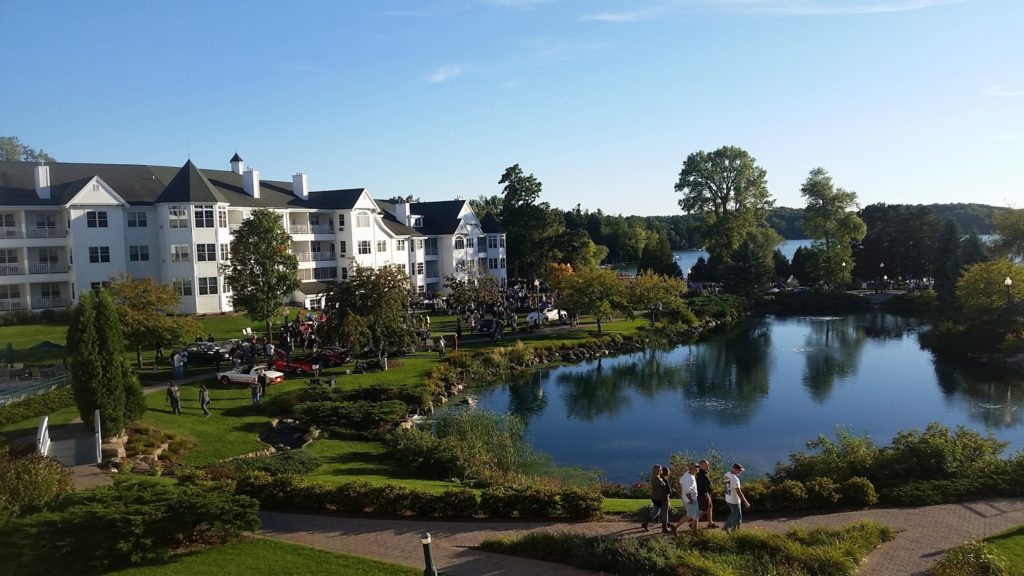 It was a picture perfect evening for the annual  Saturday night Gathering on the Green at the Osthoff. 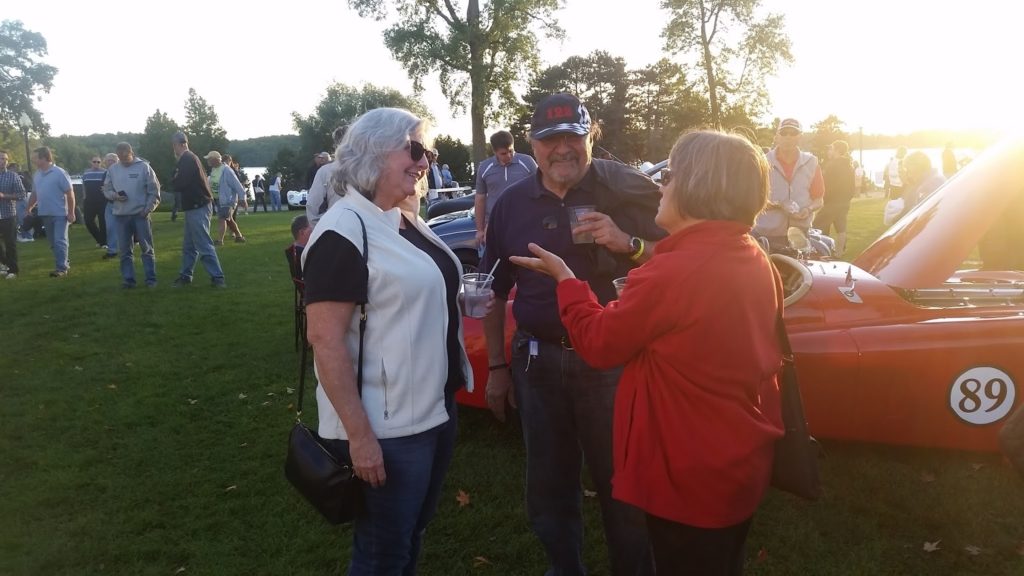 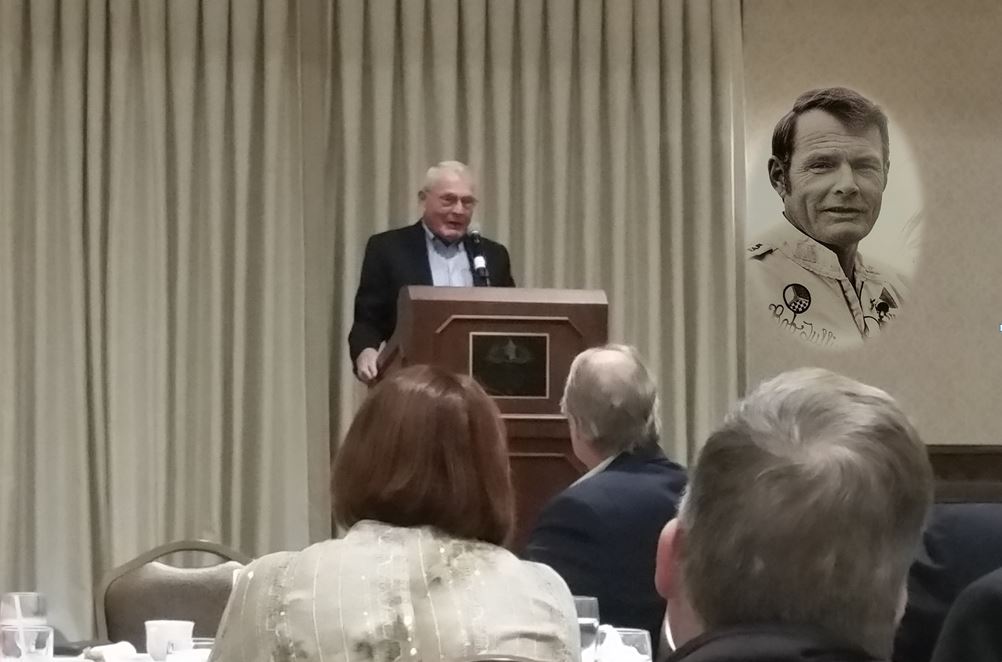 Jaguar legend Bob Tullius entertained us at the VSCDA banquet. 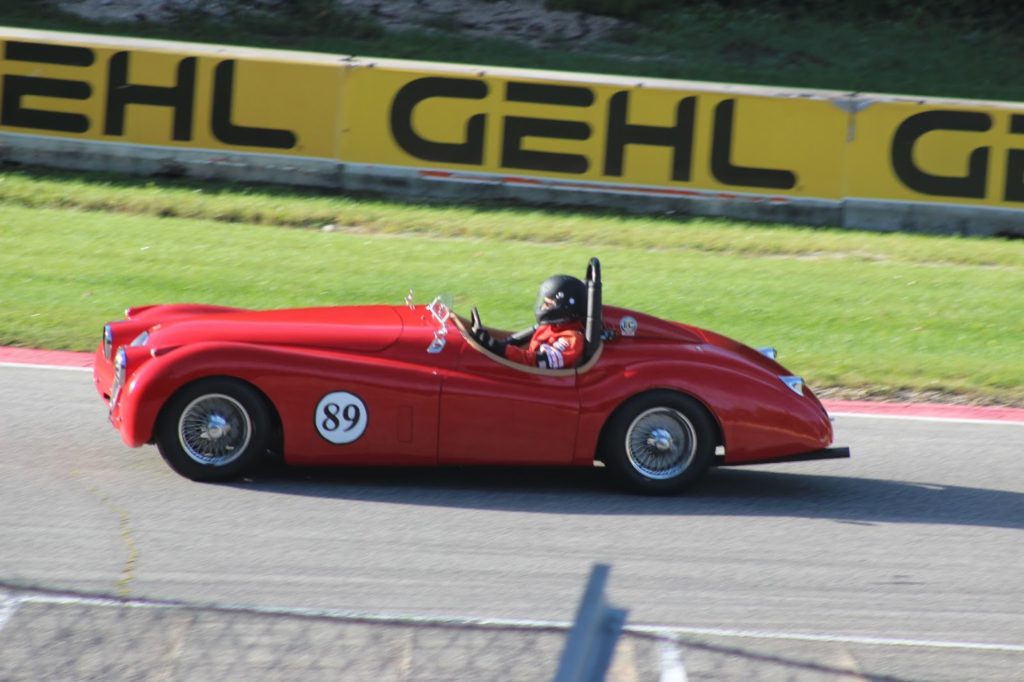 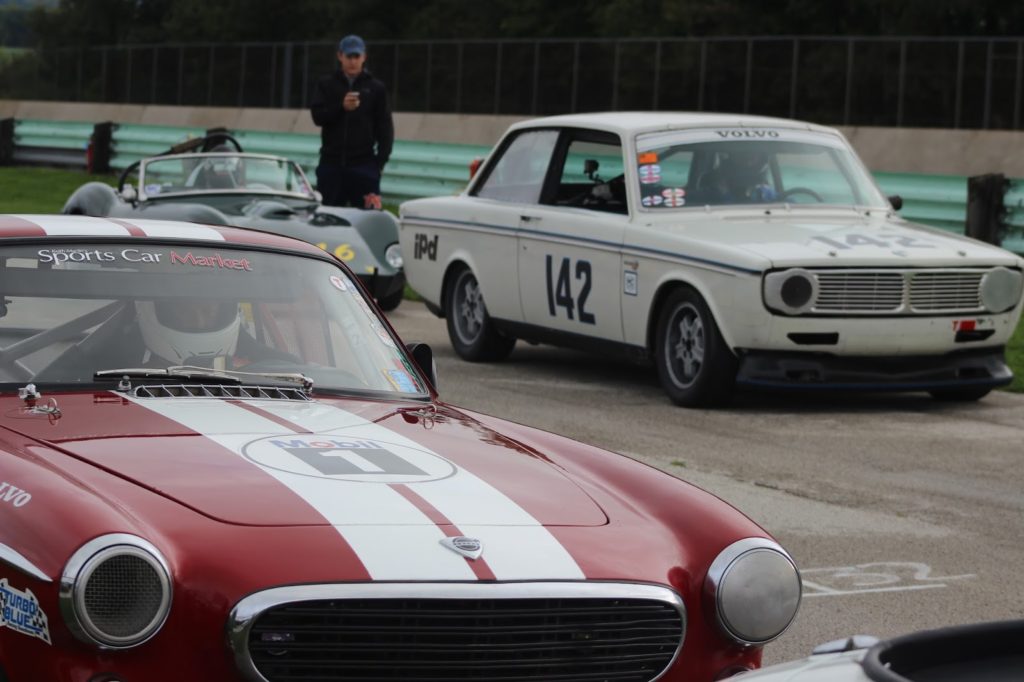 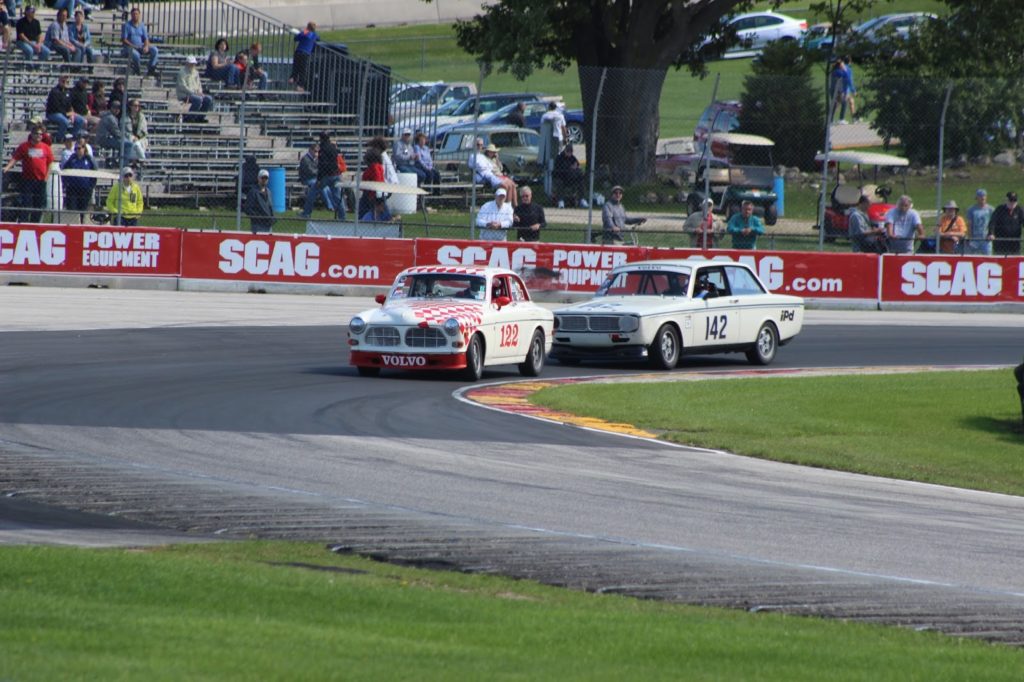 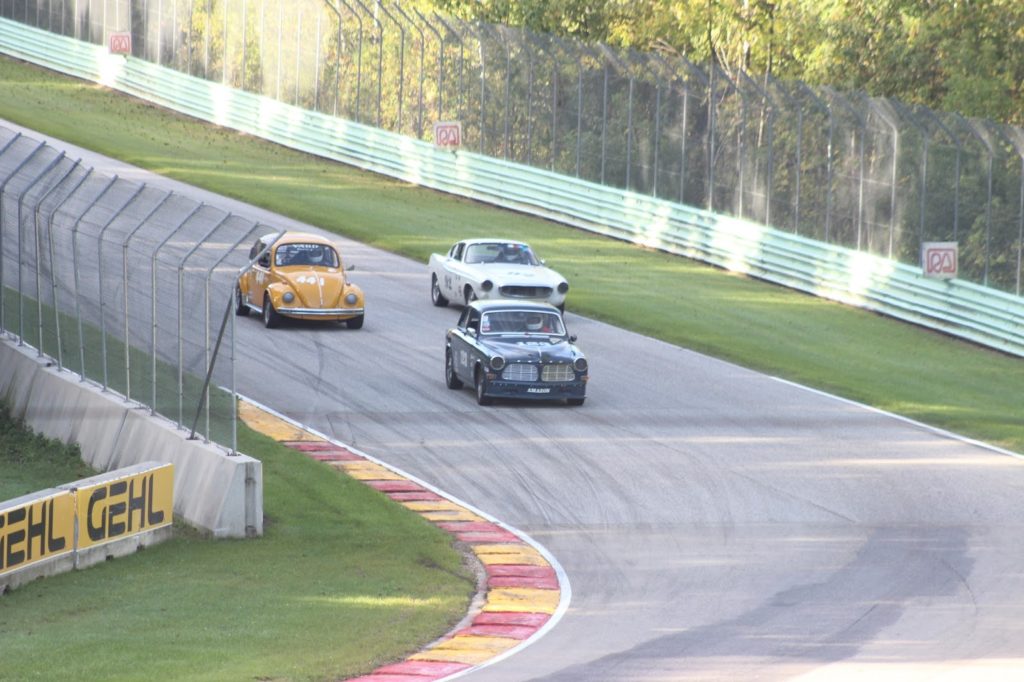 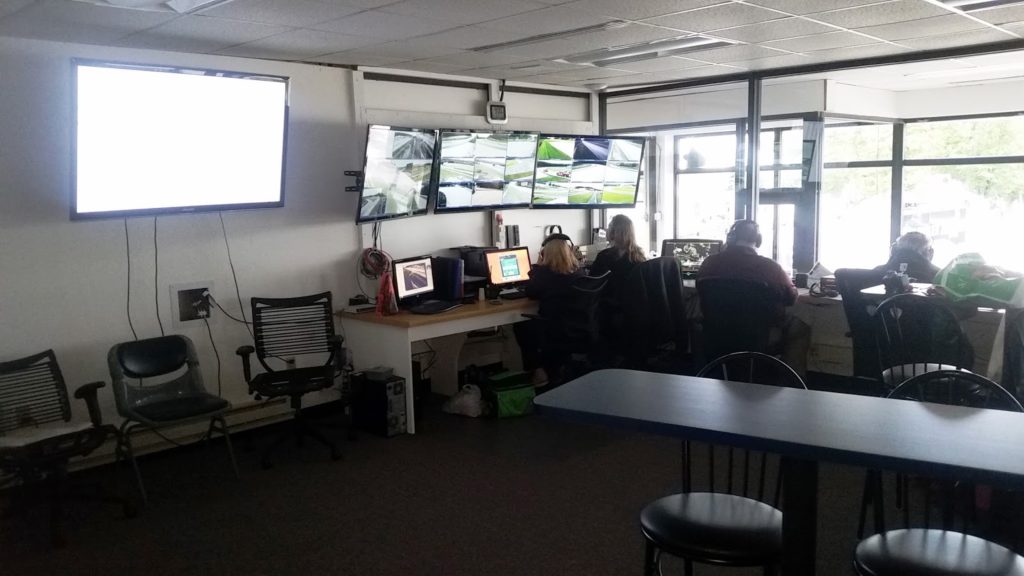 Race Control at Road America. No one gets away with much with this sort of scrutiny. 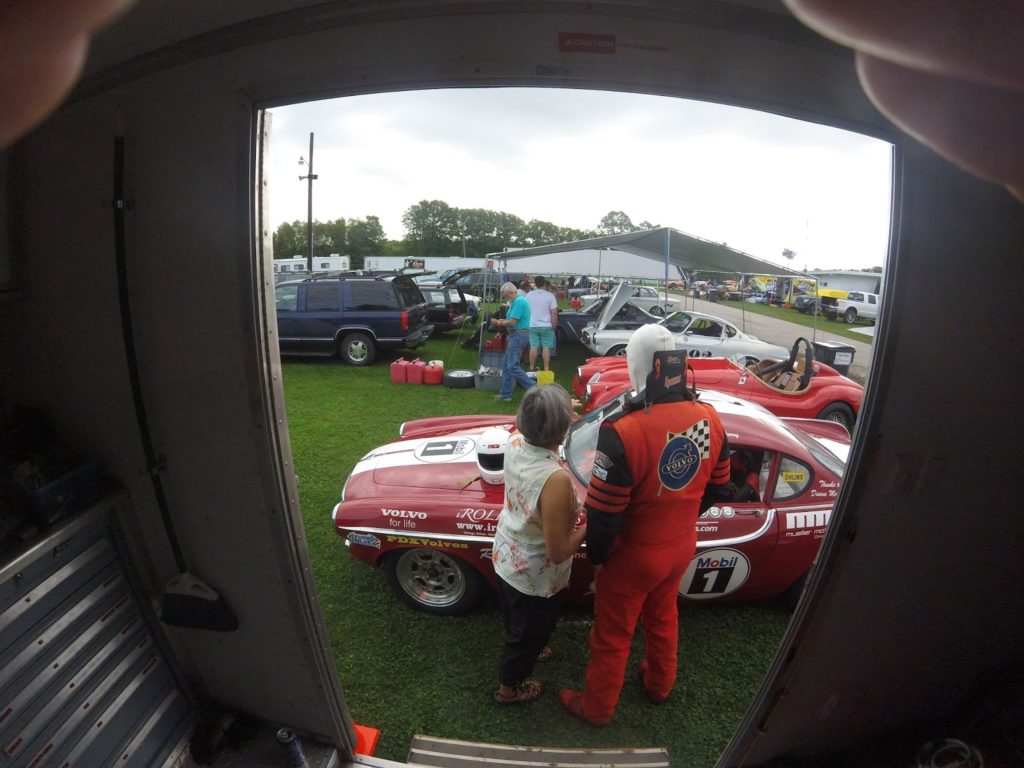 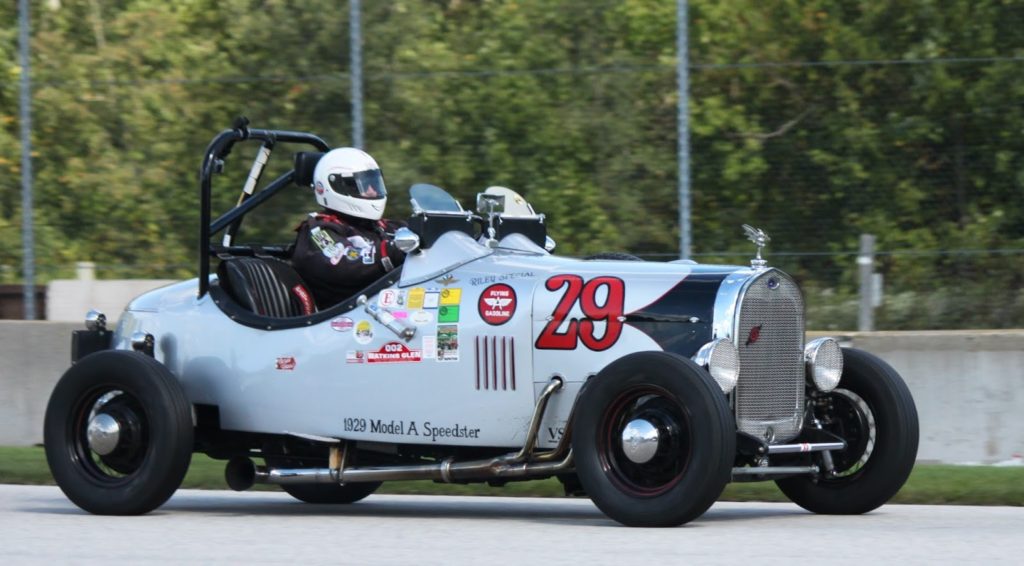 … and Bill Stelcher’s ’29 Ford was at the top of the heap. (Phil Koller photo)

I had my best lap time in our Sunday Group 2 Race: 2:49.725. Here’s the video along with some commentary and self-assessment.

Perhaps the best race of the weekend for us was the Sheldon Cup, one of the special races for cars that have a typical lap time of 2:45-3:00. Falling pretty much in the middle of that range, I ended up pretty much where one would expect, in the middle. But it was a good race as this video illustrates. Tony Drews had some really great video that allowed me to watch myself from the perspective of another driver. You can see that at https://youtu.be/AxgwER_Cy6E.

Tony graciously allowed me to use some of his footage to be part of my own video of the Sheldon Cup. Thanks Tony! Here it is:

So what is ahead as we go into the down period? Well, both motors will be stripped down, inspected for wear and new rear main seals installed. The Group Race video will show why that’s necessary. All the calipers will be rebuilt. The front master cylinder will be removed and get new seals. The transmission may get a new front gasket. I have a stock Volvo M47 transmission that needs to be gutted, the case reinforced, and then the salvagd straight cut gears from a couple broken ones installed to create a spare. And we will prepare a new motor to be installed in Cameron Lovre’s 444 as we prepare for April’s  Chihuahua Expess rally. 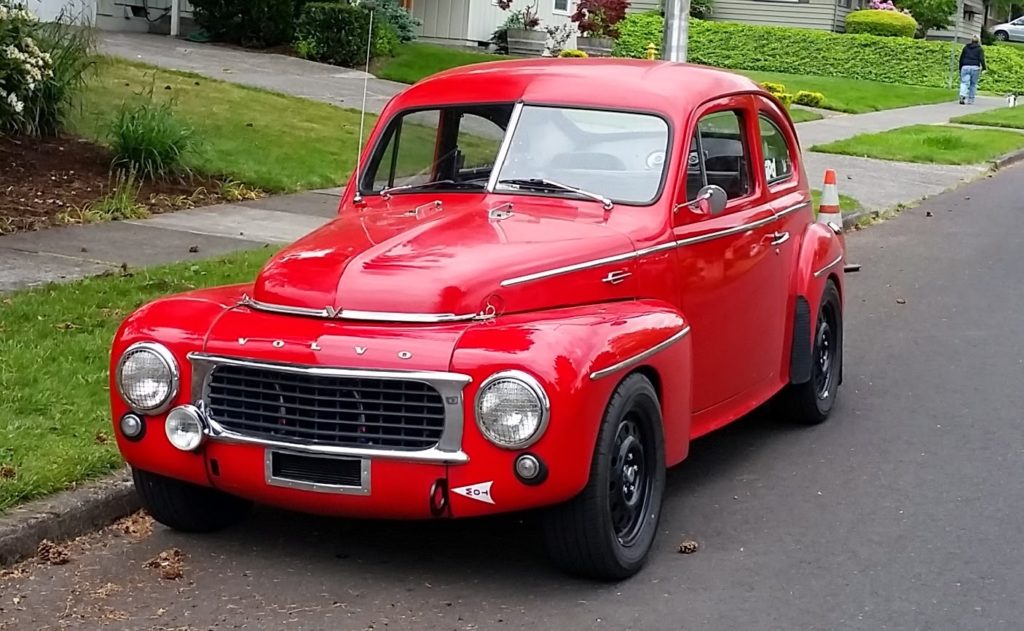 Mid-development photo of Can’s 444 that we will be running in Mexico in ’16.

Never one to sit idle, I’m happy to say I will be deeply involved in planning nexy year’s ELVF — the Volvo Nationals: Swedish Speed and Style!

Should be an interesting “off” season.

And as we sign off on the 2015 race season I want to express deep gratitude to the myriad of folks who have helped this all happen. 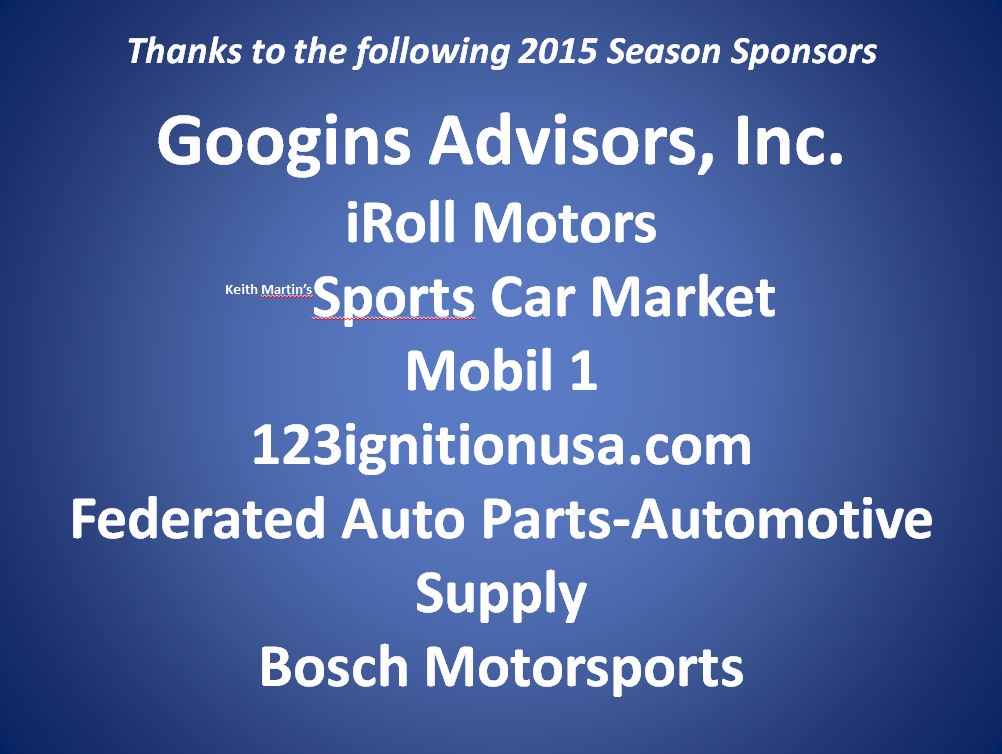 And espcially these individuals: