If there is ever an excuse for a party, the Mitty is great one. 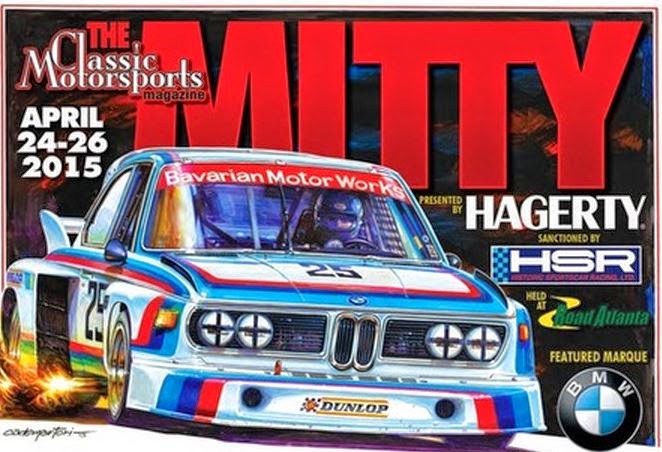 You may recall that all last year we struggled with an intermittent ignition miss. Struggled might be just slightly and understatement. More like, “What’s with this g-d – car????”

Two significant winter changes took place, and at least one of may have them solved that issue, but I am not saying which because I don’t have a clue.  Sorta like your local car dealer: “We’s got no idea what’s wrong wit your car madam, but we’s gonna  replace everyting and charge you until it sure does go away, or you do.”

Sam Seward, the Milwaukee, Wisconsin (OK, Bayside) Volvo chauffeur who lends his 1800 to Race Engineer David Farrington each time he comes out, and a semi-regular visitor to the P and B Motorsports shop, has been pointing out every chance he gets that his fancy distributor is really the cat’s uh, meow. Yep, meow. So I made contact with 123ignitionusa.com and we now are major 123 fans and advocates. This is really state of the art, with the only moving parts being the shaft and rotor. 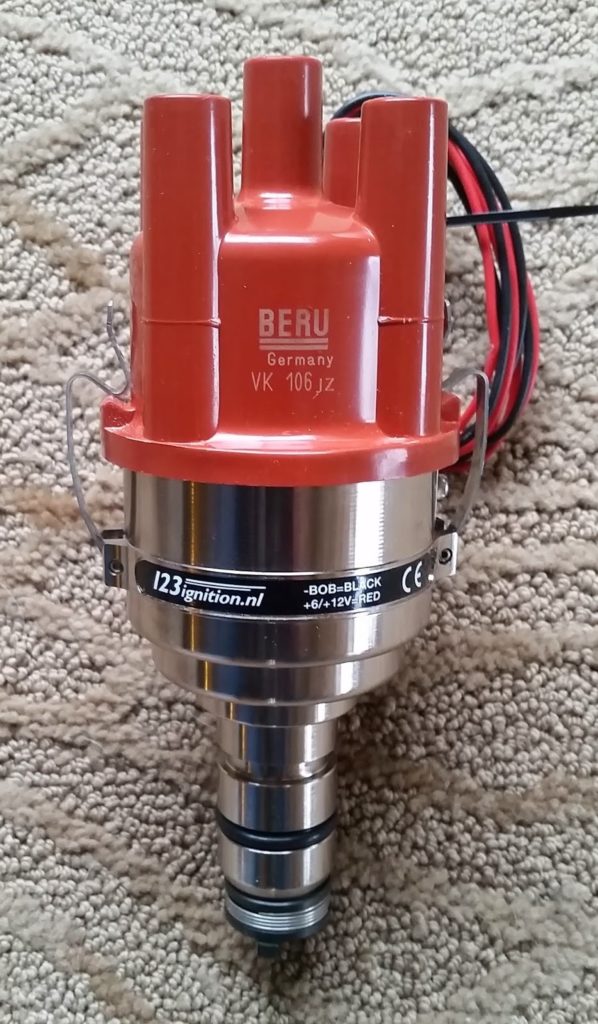 I want to recognize Ed Madak who is the U.S. distributor of the 123. I had some difficulty, and if there was ever a person who epitomizes “customer service” it is Ed. He responded to text messages in minutes, and walked me though the rather atypical installation.

We also have a dandy new head that our Whidbey Island Volvo guru Phil Singher at VClassics spec’ed out for us, using his secret formula for flow and power. When the old one finally came off the good folks at CompetitionSpecialists Racing Engines noted a tiny crack in one of the ports. Phil’s incorporates years of experience, including the build for the La Carerra Panamericana class-winning Apple Farmer Racing team’s 122 Volvo.

Bottom line, we got ‘er runnin; and gunnin’. Which is a good thing because over the winter I thought I might be losing a crew member due to his frustration with my inability to get it right.  Some people are soooooo  sensitive.

So on to the Mitty 2015. Is there ever too much of a good thing? It  was jammed with entries. Road Atlanta did not help with double booking a track day with load-in day for us, so there were some pretty testy people sitting in haulers and some pretty harried HSR staff workers trying to make nice.

Crew Chief Dave Buettner drove 11 hours from Pine Island, Florida in his Winnebago to join us. And Wednesday was a beautiful day … until the microburst right about the time we were settling down for a good night’s sleep took the Eazy Up for a rib-snapping ride (“This product is meant for shade only. Self destructs in breezes exceeding 3 mph.”).

Let’s do the Thursday Test Day!  See what we can do and play with the carb jetting. Groups 2 and 3 tested together. With over 70 cars on a 2.5 mile track, it’s bound to get messy. All three test sessions were cut short by the black flag all. Pretty much what we tested was our patience. 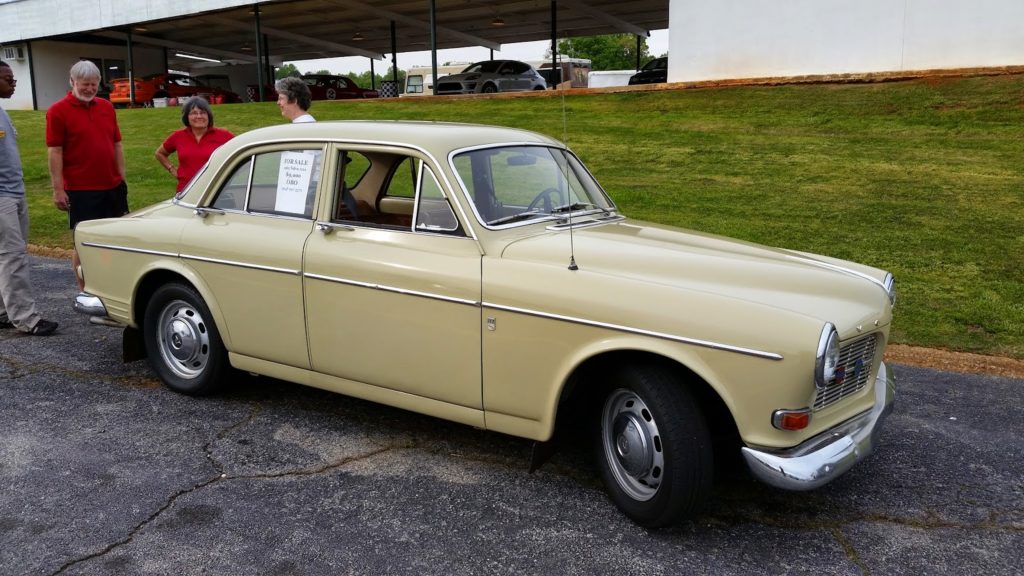 Volvos attract each other. And so do their owners. Melvin Hodges II brought this nice 122 by, and we created yet another new friend. (David Farrington photo)

Friday was a beautiful day with good track time. Both qualifying sessions resulted in new personal bests for me, and placed me second in class for Saturday’s races. I entered the evening feeling pretty hopeful. Did I mention that the Mitty is a good excuse for a party? They line up a s—t boat load full of sponsors and treat the teams to some southern hospitality of food and drink. Tim Stoddard from Classic Motorports, one of the big-name sponsors, was on hand to introduce BMW legend Boris Said. BMW was the featured marque. Could that be why Buettner came 11 hours?. 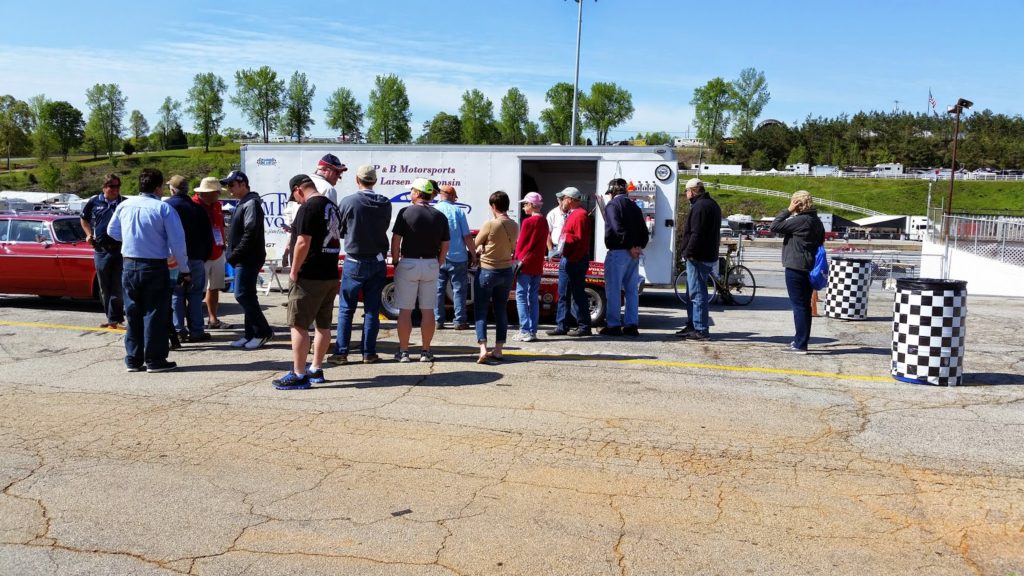 HSR’s James Redman (yes, Brian’s son)brought a group by to look at our car. (Dave Buttner photo)
Also as usual Farrington was making children’s days by inviting them to sit in a race car. 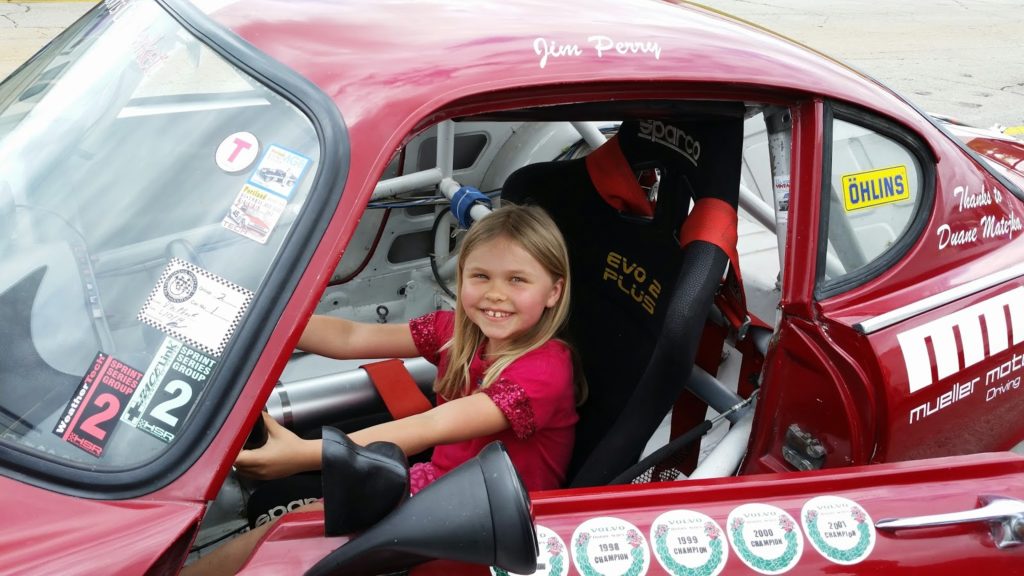 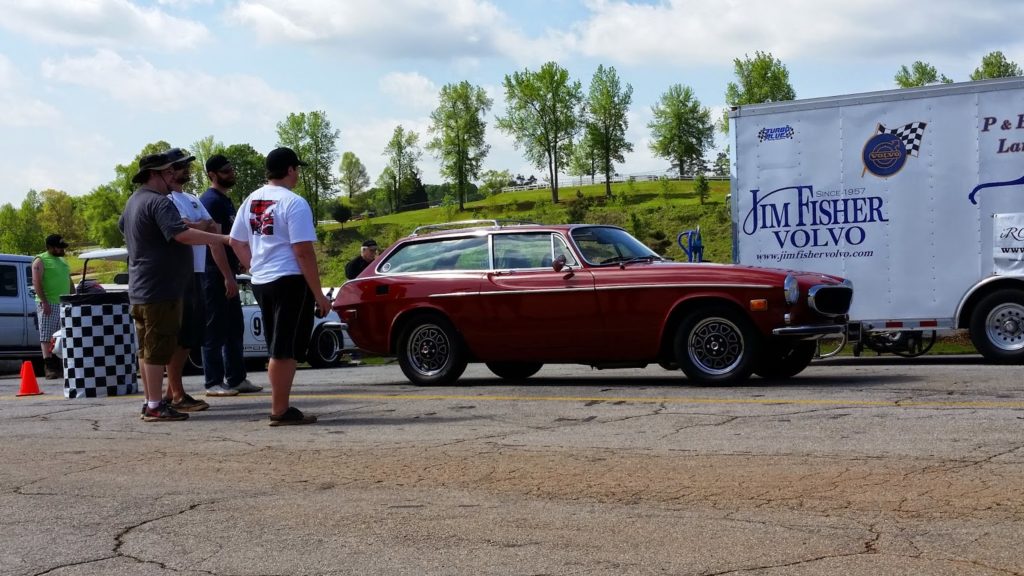 The paddack was in a highly visible corner and thus the car had a lot of people coming to check it all out. Farrington even parked his ES behind #1 so it could also have admirers. (David Farrington photo)

And then the rains came.  The tinkle on the roof of the motorhome was persistent from 10 p.m. throughout the night. My mind’s eye could see the river of water flowing across the track at Turn 5. So as Saturday dawned grey and wet, we decided it best to stand pat in favor of going out on a very wet track.  And the gods were once again with us, because all day on Friday the announcers had said they were taking credit for the great day and Saturday was going to be someone else’s fault. But the skies broke and Saturday just got better and better. Accu-Weather was watched and the rain tires came off. 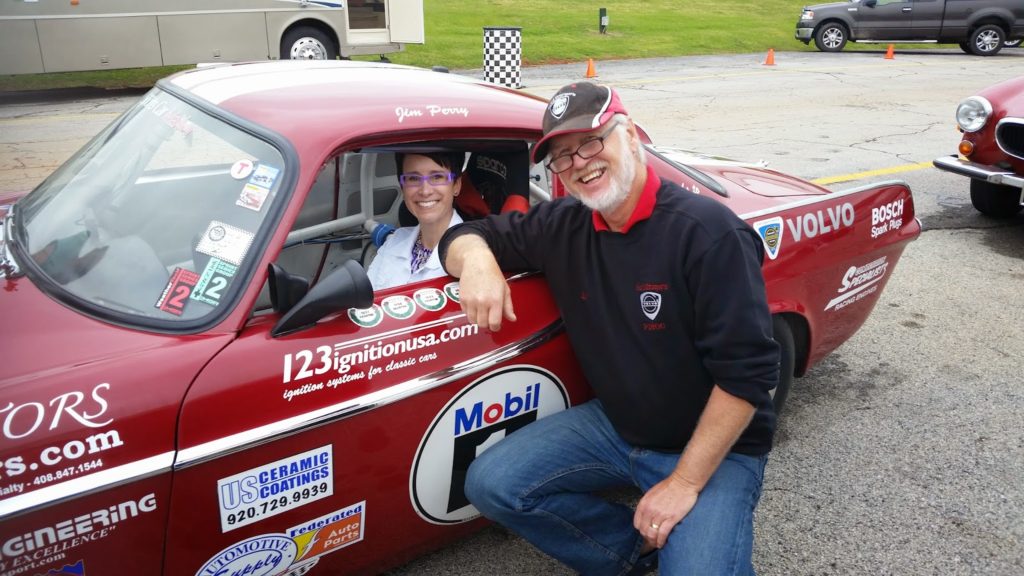 Andrea Nichelson and her husband Alan from California stopped by. Andrea loves 1800s. Nothing quite like a pretty woman who loves 1800s. (David Farrington photo)

Hot digity dog, we is goin’ raicn’ boys. And then the car crapped out.

So Saturday evening was one of those “We don’t wanna be around Jim” evenings. Neither did Jim, but I’m stuck with the SOB. We fiddled a bit and I tried to drive it around the paddock and on the access roads but the myriad of slightly inebriated race fans acting like slightly inebriated race fans did not help the cause. I.e. I could just imagine one across the hood in my personal testing session. And what the inside of a Georgia jail cell looks like.

There nothing short of worrying about Wisconsin politics  that keeps this good ‘ol boy awake more than a car that ran well one day and then acts like it’s been parked with the mother-in-law for too long the next.

Porsche City. But the Mustang won.

Our Sunday race was not until 3 p.m. so I had plenty of time think on it and stew. And by golly I ain’t telling you what took care of the problem, but the problem got taken care of. Sometimes it’s best just to not tell the whole truth, lest you all know what a complete dipshit I can be.

You’ve read that some F1 cars used the engine as a structural element holding the car together? 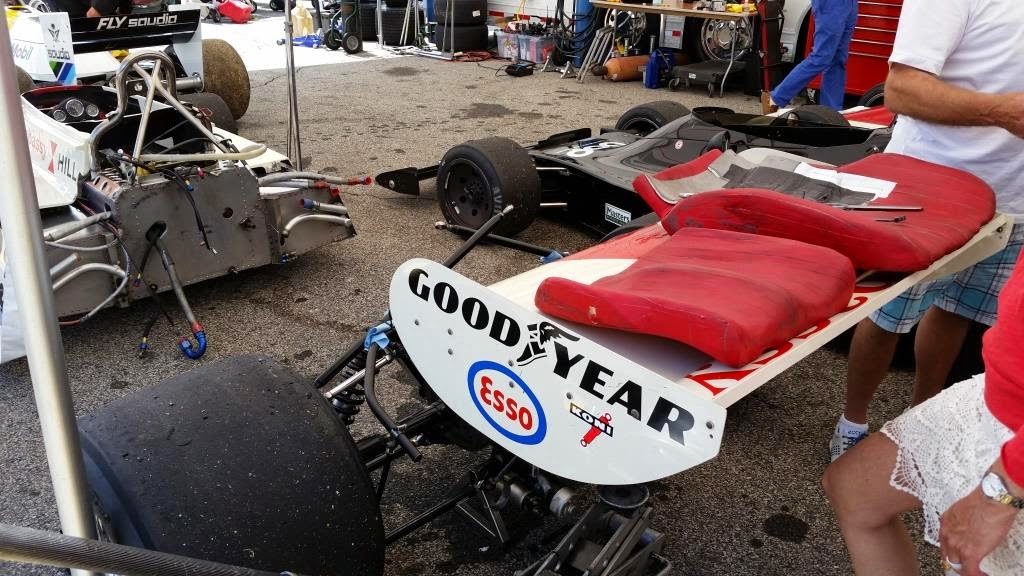 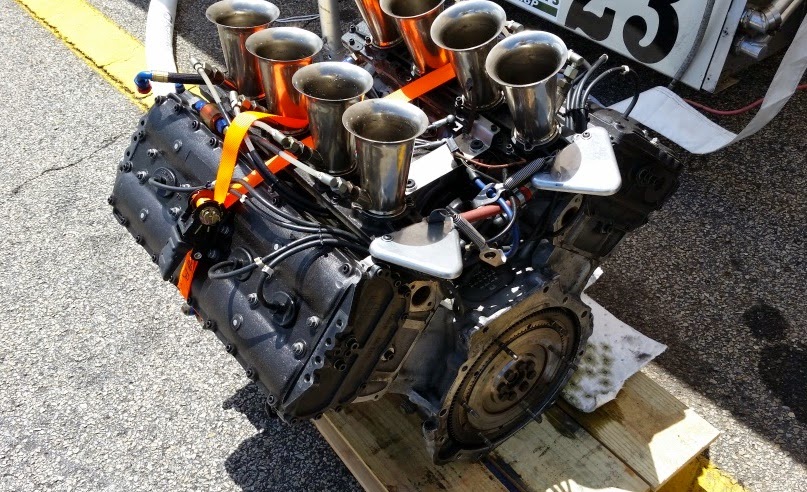 Thanks to my Saturday non-start, Sunday’s race began with no one in my rear view mirrors, but we had one hell of a good time changing all of that.  I had listened closely at the drivers’ meeting about how no one sitting as a back marker at race start should jump on the gas when others in the front were just getting the green flag at the front. So coming under the bridge I did just what I needed to do – jumped on the gas while the others were just picking up steam at the front.  Hey, I take advice. Here’s the video.

All’s well that ends well, and I managed third in class and another personal Road Atlanta best.

I love Road Atlanta. I love the big courses. I love the warm weather and southern friendliness, and the way HSR treats the entrants. Life can’t get much better folks. Next weekend we are on to Michigan and GingerMan Raceway. Stay tuned. 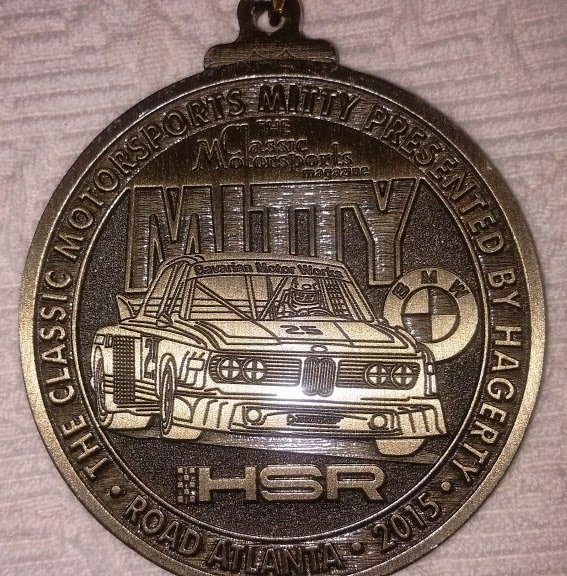 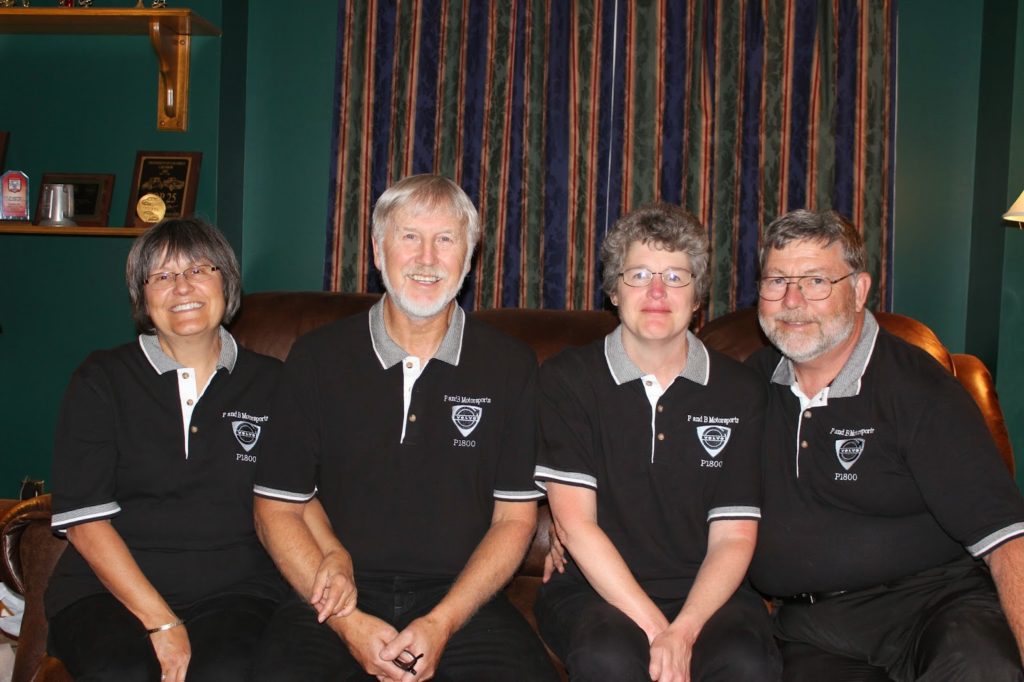 Where’s the Crew Chief Shop Teacher when you need him?


We got a nice surprise when Sports Car Digest used us as part of thier April 30 Mitty Report too!

Oh, and lest I forget, I want to point you to the blog of next year’s great adventure creator, Cameron Lovre, who is putting the pieces together for the Chihuahua Express and La Carerra Panamericana Volvo 444 that is going to thrust us into fame and fortune with wins in the 2016 Mexican races. (Not only does is this turkey building a kick-butt car, he writes better than I do too.) Take a look at Cam’s most excellent blog at SwedishRelics. I relish the opportunity to drive it fast….