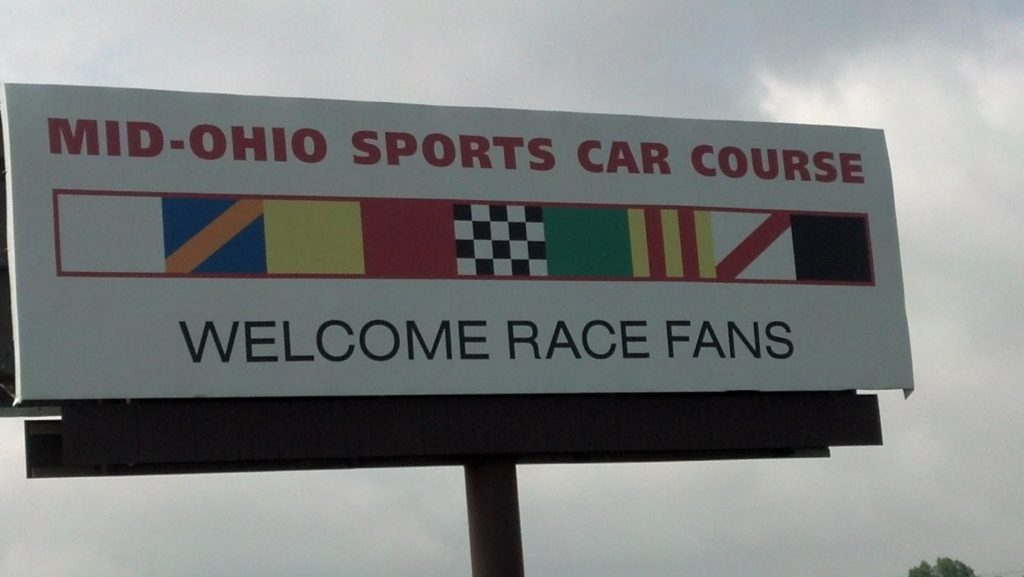 Cry me a river! That could have been the tag line for the Mechanics Bank Vintage Grand Prix at Mid-Ohio Sports Car Club. It did not just rain. It poured. And then poured some more. And then some more. Of course our travel day was beautiful.

Our first experience with this tight 2.4 mile, 15-turn track was less than exceptional, mostly because of very limited track time as wave after wave of black clouds rolled in from the northwest. 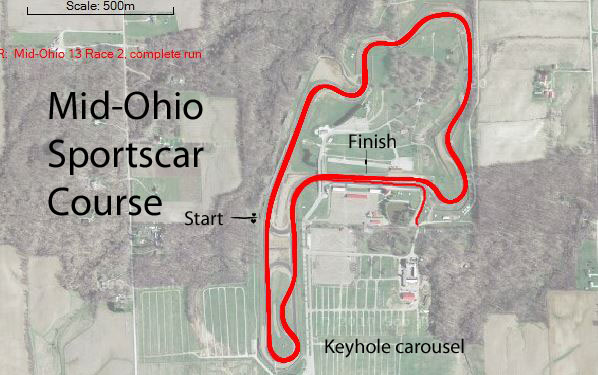 Start and finish line are in different locations

We were smart enough to be paddocked on the high ground. Those lower found themselves flooded. Rivers ran down the paddock roads, washing them out. Potholes to negotiate abounded.  Heavy winds resulted in many EasyUp frames turned into pretzel-like shapes. (We learned our lesson last year – when in doubt, take the canopy off!) 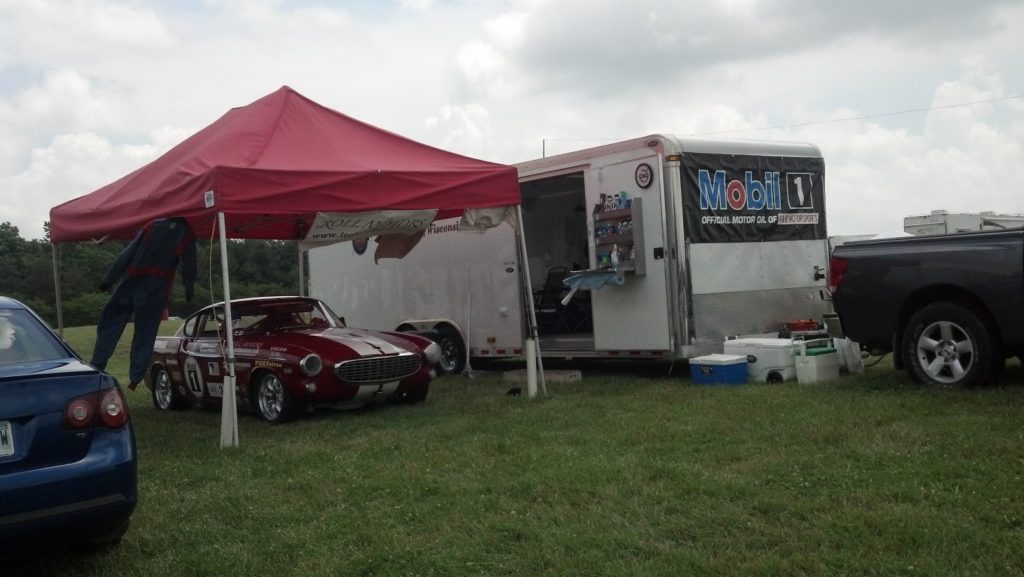 The P and B Motorsports team consisted of Race Coordinator Joy Perry and Race Engineer David Farrington supplemented with the hands, mind and willingness of Doug Senk (who often takes care of Jeff Babcock) and our car builder/friend/Volvo guru Duane Matejka who came out from eastern Pennsylvania. The plan was for Duane to share the driving of the Enduro with me. Best laid plans …

Mid-Ohio is not an especially fast course for small-bore cars, and it was slowed not only by water on the track but the addition of a chicane. Probably a good thing. It has a tight “keyhole,” some off-camber blind turns that fall away, and a very slow right-hander carousel leading to the front straight. Lots of drivers found it pretty unforgiving during the practice session on Friday. Between cars in the grass, sideways in the middle of the track, car pieces lying in the middle of the track and my own cautious nature with an unknown surface, our sole Friday practice session was not anything to write home about. 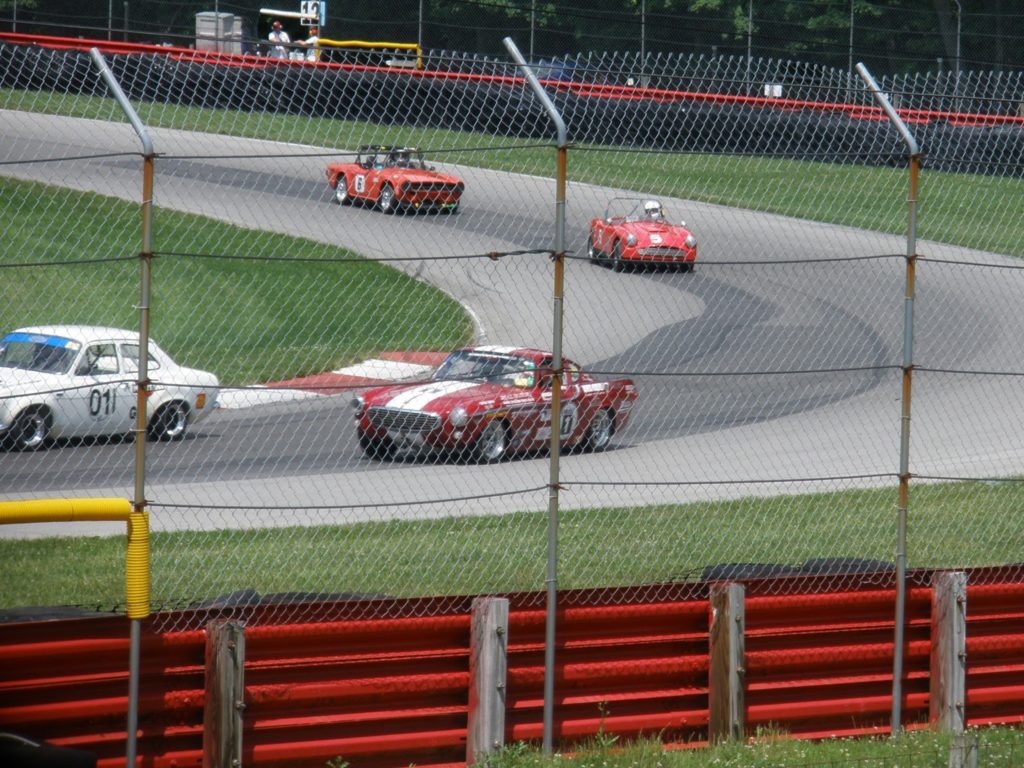 SVRA runs a first class operation. They are a for-profit sanctioning body, and perhaps as a result they are not only very customer friendly, they are also extremely serious about their tech inspections and safety on the track. (Other sanctioning bodies might consider taking note.) They also were not reluctant to close things down when the heavy rains hit. The consequence was our only getting one qualifying session. 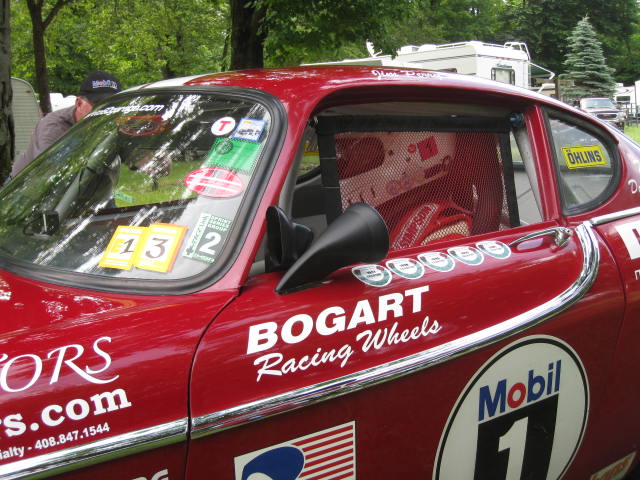 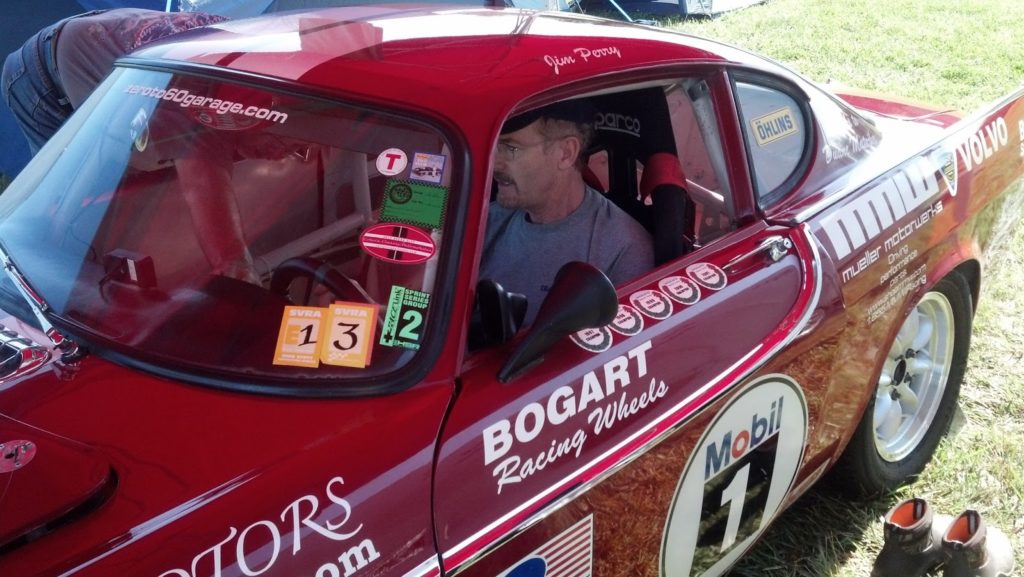 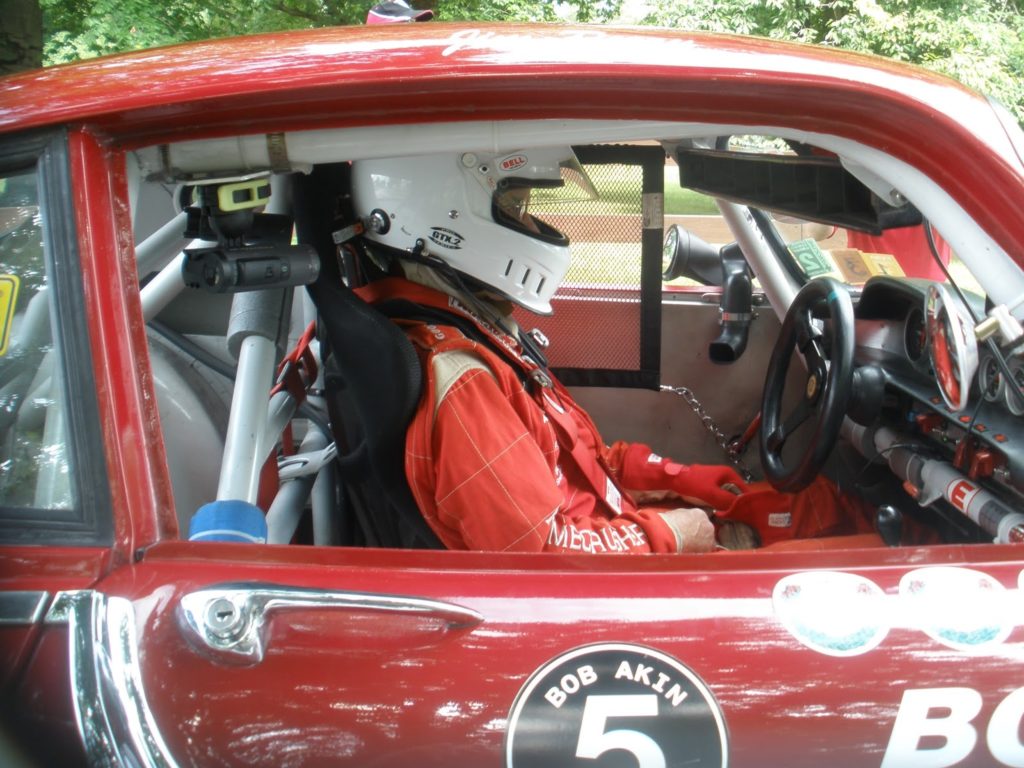 Duane Matejka gets the feel of the cockpit again

Duane qualified the car Saturday morning. I wanted to make sure he had some seat time given the weather forecasts, and I also wanted to see him drive the car in which he had taken five Volvo Historic Series championships, both from a trackside vantage and also using our two in-car video cameras. He put the car in the back half of a Group 3+4 field of about 50 cars. The guys and girls in front of him were riding rough as this short video clip shows, and Duane knows when and how to keep the metal straight. 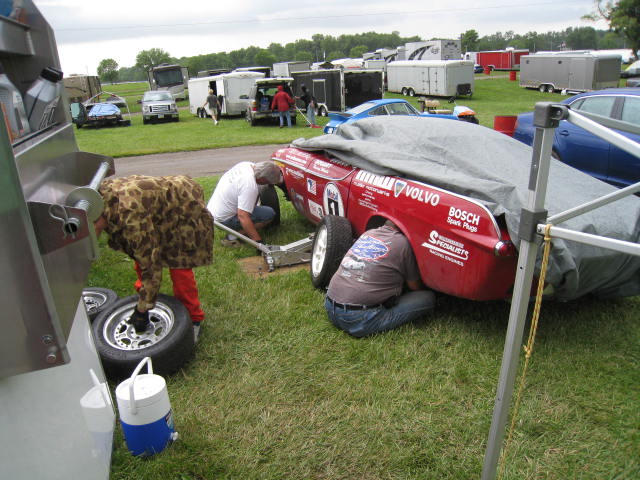 I really cannot say enough about the dedication of this crew. If you could only see the rain … 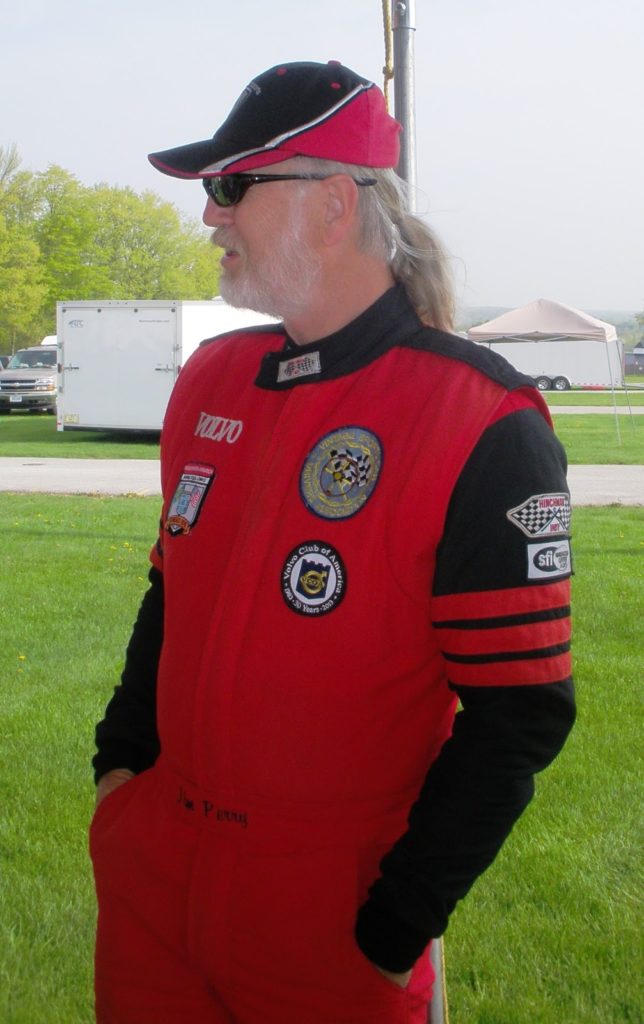 All I need do is watch?

I ran the two Sprint Races, one on Saturday and one Sunday. We placed third in class. By the time my three track sessions were over I felt semi-comfortable and was able to best Duane’s time by 0.281 seconds. In fact, as the video shows I had a great race with Paul Gelpi’s E Production MGB.

Here’s a short video clip that David took from trackside at the Esses:

If we could figure out why #4 cylinder is running a lower EGT (and hence putting out less power), I might have been able to take him on the back straight. Duane made note of the fact that the power seemed to be down from what he remembered. Always a little problem to chase down. 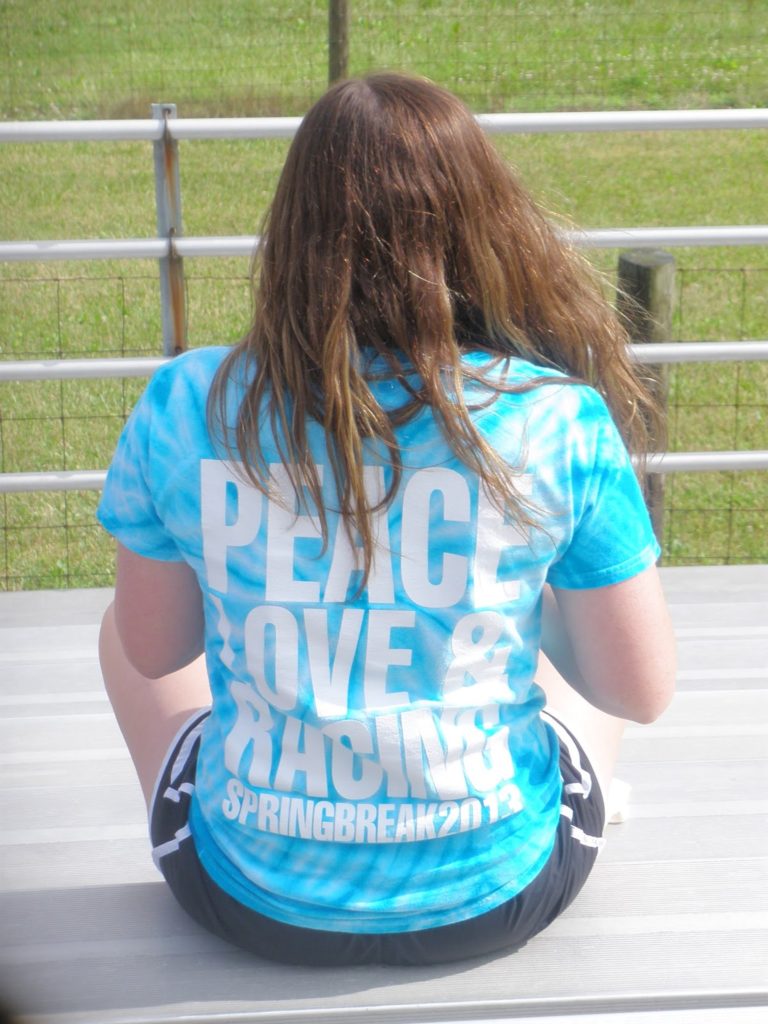 Is this the ’60s again? (David Farrington photo)

We have a month long break before the Midwestern Council Double Race Weekend at Road America in August. We’re showing the car at the 150,000 spectator Iola Old Car Show. Should be fun.

See you in a month, and remember …